The Armadillo Hill Country Classic is the Austin Cycling Association’s main fundraiser every year. It’s a nice supported ride starting from Liberty Hill, northwest of Austin, and I like to ride it if my schedule lets me. I’ve done the 50-mile version the past two times I’ve ridden it, and was looking forward to do the 60-miler this time around.

The day was darn near perfect. The 105-mile ride had to be shortened to 90, because two cattle guards on the long route were under water from recent rains, and those roads were impassable. The long riders set off at 7:30, a half hour in advance of the rest of us.

Temperature was about 63 degrees (17C) at the start, and what wind there was wasn’t a factor. The day was sunny and bright. We started out on the familiar roads, and held together as a large group until the first rest stop at seven miles. I was surprised at the large number of riders who made a stop there, since our group was the 43, 50, and 60 mile riders. I wouldn’t expect anyone with the experience to go that far would need to stop so soon.

We’ve had some decent rainfall over the last week, which caused the route shortening, but the rain also is producing one of the finest crops of wild flowers I’ve ever seen. The roadsides were carpeted with them.

But in my careful preparations for this ride, I forgot one detail: to check the batteries in my camera. Right after snapping this shot, the camera died. You’ll have to use your imagination to visualize the scenes I depict.

Shortly after the flower pics, we turned onto County Road 284 — one of the worst stretches of chip seal it has ever been my misfortune to ride. It shook my jaw, rattled my teeth in my head, and sent irritating vibrations (not quite painful, but almost) to my feet and hands. That was the longest three miles I’ve ever ridden.

My first rest stop was in the only town the ride visits: Bertram, pop. 1300, about 23 miles in. The rest stop here is a good one, as rest stops go, and I was glad to get some relief, a quick bite of food, and to top off my water bottles.

Some miles past Bertram, the route split, with the 60-milers going to the right. This brought me onto a part of the course I’d never seen before. Maybe it was because this area was new to me, but it seemed more “rural,” with houses and small ranches spread far apart, and a winding narrow country road. I got to the rest stop at the “Dillo Door,” where the 105-milers had to pass before 10:30 in order to be allowed onto the long route. I passed the rest stop and turned onto the 60-mile route.

It wasn’t long before the road took a turn that surprised me. Even though this ride is in the Texas Hill Country, the roads are mostly flat, or easy rollers. But a real hill loomed ahead. It compared with “Hail Mary Hill,” that I have struggled with on rides close to home. I stood and pedaled in my 34 x 28 granny gear, and finally crested the top.

As I eased my effort and continued along, two wild turkeys flew onto the road ahead of me, stopped, and started walking in the same direction I was going. The huge birds finally realized I was behind them, and they flew into the underbrush on the other side of the road, where I could see them walking away as I passed.

Just a few minutes later, another varmint crossed ahead of me. This time, it was a skunk! He was closer than the turkeys, and I had to swerve wide left to avoid him. As I pulled even, he raised his tail and took aim. I pedaled for all I was worth. I don’t know if he got off a shot or not, but in any case, I was untouched. 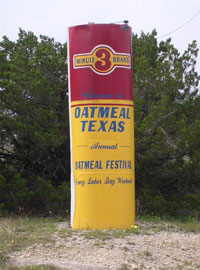 I turned onto the road to Oatmeal, and passed their iconic sign. The rest stop at the top of a nearby hill was a welcome sight, and it even had some chairs to relax. From here on out, it was back home on the roads we’d headed out on.

My bottom was starting to protest, and I decided I’d stop at each of the remaining stops, if for no other reason than to get off the bike and walk around for a minute or two. But at the next to the last stop, as I wandered over to the food table and found to my delight that they had some nice salty pretzels, I also found some critters milling around my feet. It seems a small flock of chickens weren’t going to be bothered by bikers and tables and ride volunteers, and were intent on picking the ground for any stray Clif Bar crumbs. My cell phone camera doesn’t do them justice.

I knew I was 14 miles out from the finish, but my computer showed that I’d already traveled 49 miles. So the 60-mile route was really going to be 63 miles. No biggie, but now I just wanted the ride to be over. I had hoped to finish at about 12:30 p.m., for roughly a 15 mph average once rest stop time was figured in. Looking at my watch, it seemed that 1 p.m. would be a more realistic finishing time.

A nice tailwind let me cruise at 25-26 mph for several miles, and then the rollers — and that horrible chip seal on County Road 284 — slowed me again. On the outskirts of Liberty Hill, I passed some tired-out riders, then crossed the railroad tracks and turned into the school parking lot. I was done. The time was 12:49. That gave me an average speed of 14.4 mph, which I decided I’d be happy with.

Cars were sparse in the parking area, and I could change clothes in my front seat without risking anyone getting a look. A little glitch with the post-ride food caused me to wait a little longer, but I eventually got my burrito, a cup of iced tea, and hit the road home. The temperature was still only 75 degrees (24C) and I had been comfortable throughout the ride. A good route, with great support, and a mix of flora AND fauna — it’s no wonder I try to make this ride every year.