On Friday, I treated myself to a ride I’d hoped would happen for several weeks now. I rode with a fellow named Don Bynum, who writes a biking blog about his rides with a group of his buddies in rural Texas. I had stumbled across Don’s blog, with the catchy name, “Don Bynum’s Blog,” some months ago, and was attracted to it because he does the kind of biking I’ve come to enjoy: Low-key rides in the country with leisurely stops for lunch. I managed to invite myself along on one of his rides.

Don lives about 75 miles from my house in Austin, on the shore of Lake Buchanan (Buck-CAN-nan) in Llano County. The nearest city of any size is Kingsland, which is an unincorporated blue-collar retirement community. Because of the distance, we decided to leave rather late — at 10 a.m. Three of his regular biking buddies — Richard, Doug, and John — joined us.

Don suggested we head for Inks Lake State Park and one of his favorite routes — Park Road 4. Getting there was a bit of a challenge. We rode Texas 261, a two-lane with no shoulder that was busier than I’d expected, to Texas 29, a four-lane with a decent shoulder, but lots of traffic. The road crossed the bridge over the Colorado River where it flows into Inks Lake, and soon after, we turned off onto Park Road 4. Almost immediately, Richard flatted. We thought it was because of a field of broken glass we’d passed over on Texas 29, but it turned out he had a faulty tube — it split along one of its seams. Don’s wife Peggy sagged Richard out to our lunch stop, while the rest of us continued our ride up the park road.

Don’s ride of choice is a three-wheeled recumbent called a Catrike. It sits low to the ground and can really fly going downhill. Going uphill, he slows drastically. But he can always put it into a 1 x 1 gear and spin up the steepest hill.

The hills in the park were entertaining, and not too difficult. But soon we hit a straight, flat stretch of road. We were out of the park and into an area called Hoover’s Valley. And that meant it was time to stop for lunch. By this time, Peggy had collected Richard and delivered him to the Hoover’s Valley Store where we had gathered. She also brought Don’s mother and granddaughter, so we filled a large table in the store’s little restaurant. A cheeseburger and a bottomless glass of ice tea hit the spot, but two of the guys went for the meatloaf, mashed potato and green beans special.(!)

Leaving the store, we continued south on the flat road, cruising at about 22 mph, when the advantages of the Catrike showed themselves. Don shot by me easily going about 30. He could have led most of the trip if he’d wanted to, but preferred to stay back in the event traffic came up from behind. The odd form of the trike caused cars to give us a wider than usual berth.

When we reached Kingsland, the group broke up. Don had to get home to clean up, because he had an engagement later in the afternoon. Richard and John opted to go with Don. Doug offered to show me the “Llano Slab,” and we rode through Kingsland until we hit River Oaks Drive, which borders the Llano River. At the end of the drive, we made a short run down to the river itself, and I could see the slab — a formation of pink granite that breaks the river up into a number of rivulets, flowing fast and cold. It looked like the kind of feature you’d see in Utah, rather than Central Texas.

Doug led the way back to Don’s house. I was hard pressed to keep up with him. He shifted into the big ring, and pedaled slowly but smoothly in a cadence that put the miles under his wheels. “I just find my comfort zone and go,” he said. I was in my small ring, pedaling at a higher cadence, trying to figure out why I couldn’t catch a 70-year-old. 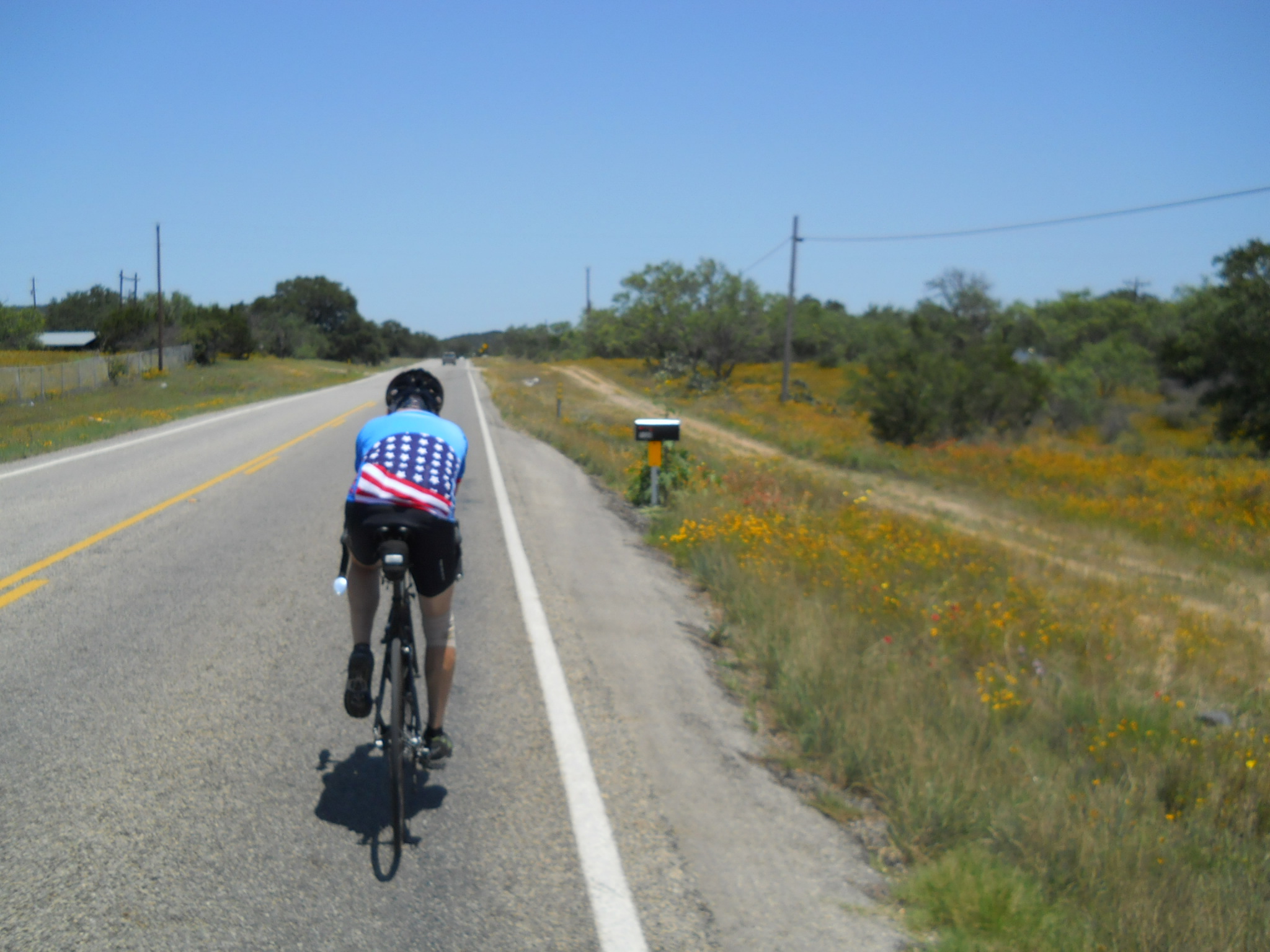 As I said earlier, this is my idea of a great biking day. Some interesting topography, nice scenery, a good, but not too brisk, pace, a nice burger break, and then beers to top it off. Thanks to Don and the guys for showing me a good time.