I was looking forward to the club ride this morning. We were going to head out on Fitzhugh Road, which goes through rolling Texas Hill Country landscape southwest of Austin. The club has several different lengths for this out-and-back route, so the rider can tailor it to his or her own abilities.

Today, I planned to go beyond the usual B ride turnaround point, and go another seven miles to the A turnaround. That would give me a 46-mile round trip instead of 30. I was amused to see that a few of our group decided to start at 7:30, instead of our usual 8:15 a.m. start time, to beat the heat and add some additional distance for a 60-mile round trip.

I have a love-hate relationship with Fitzhugh. It’s a fairly scenic ride, and the rolling hills can be a challenge. But I’m often well behind the group even before we get to Fitzhugh, about nine miles west of our starting point. It’s common for me to ride Fitzhugh all by myself, with the  main group well ahead and out of sight.

Some riders stopped at a convenience store at the beginning of Fitzhugh, to top off their water bottles. While the day promised to be another hot one, it wasn’t terrible yet, and a light breeze cooled my sweaty skin. I passed up the store, and pedaled on alone.

But a few miles down the road, I could hear some chatter behind me. The half dozen riders who had stopped caught up to me and passed me. One of the problems I have when riding alone is a tendency to ride easy. I saw that I could push myself a little more, and stayed with the group for several miles. 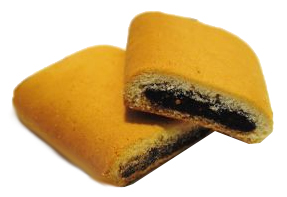 At the turnaround, I arrived by myself again, but found the rest of the crowd still there, grabbing what little shade could be found. I drank deeply from my bottle, and fished some fig bars out of my back pocket. Fig bars are a common snack at breaks, and I like them better than the energy bars. I had three small bars with me, and figured I had time to eat them all to recharge myself for the ride back.

But as I chewed the first bar, I realized that I wasn’t going to eat all three. Heck, I was having trouble getting one down. I chewed and chewed. I didn’t want to munch on solid food. I would have preferred some kind of energy drink, but all I had with me today was plain old water.

Since I was the last one to the turnaround, I got the shortest rest period before we started back. I was still chewing the one fig bar as people put their helmets back on and took one last swig from their bottles. By now, the fig bar was a gooey blob in my mouth, and I couldn’t seem to get it to go down the pipe. Finally I did, and set out on the return leg several hundred yards behind the others.

At the convenience store at the head of Fitzhugh, I caught up to everyone again — just as they were leaving. I refilled my bottles and sat down in the shade to have another fig bar. Same thing. It was like chewing on taffy. I had trouble getting it to go down. I’m sure it held me up and kept me from leaving soon after the rest of the riders, but I had to choke the food down and wash it down before I felt ready to leave.

The day was hot, but not remarkably so in this hot summer. I was bushed from pushing myself up the rollers, and my right thigh was showing signs of potential cramping. So the conditions were testing me, but they weren’t anything I haven’t experienced before — just as recently as the day before.

Somehow, the combination of the heat, the sweat, and the fatigue all combine to prevent me from enjoying food during rides. As I write this, the third fig bar is sitting on the kitchen counter, still in its baggie. I’ll probably snack on it later tonight. Obviously, I’ll have to come up with something else to eat on long, hot rides. I’ve used energy gels in the past, and for the most part, don’t care for them. The candy-like gel blocks work okay, and Gatorade has just introduced their own version that is easier to chew than others. I might have to stock up on those.

It’s a shame, though, because I much prefer “real” food when riding to those scientifically mixed concoctions. But I’m open to suggestions. What kinds of foods do you like to eat during a longer summer ride, and have you ever experienced the same difficulty swallowing food as I do?