Riding Saturday morning in delightfully cool weather (Everything being relative — it was 63 degrees here [17C] — and that’s cool in Austin, Texas), I decided to push it a little bit. After an easy Mopac Loop with my wife, I dropped her off at home and continued on with my normal Saturday ride toward Convict Hill.

The cooler weather really helps. I wasn’t at all tired when I started to climb the hill (it’s not that steep, but a good test) and I pedaled harder than usual. When I reached the top, I found that I had done the climb two seconds faster than my previous best.

Buoyed by the good news, I crossed the hill to Wolf Creek Pass and took that drop down to Highway 290. Turnaround, and sprint up the hill. Well, sprint for about 25 yards. Then it was tough going as I pushed one gear higher than I have been on that hill. But I got to the top still feeling almost fresh, and less winded than I’ve been in the past. This was going to be a great ride.

I gained speed going down a residential side street and leaned hard into the corner at the bottom. Then it was a short coast to the rise at the end of the block, where I had a right turn. I shifted down two gears, saw there were no cars coming from the left, and stood on the pedals to turn onto the cross street.

Suddenly, a sharp metallic clunk sounded from the rear hub. Something clinked against my spokes. I stopped pedaling instantly, and the bike almost came to a complete halt.

In danger of tipping over in the middle of the street, I managed to clip out of the right pedal and slam my foot to the pavement. A glance back at the rear wheel revealed a sickening sight: 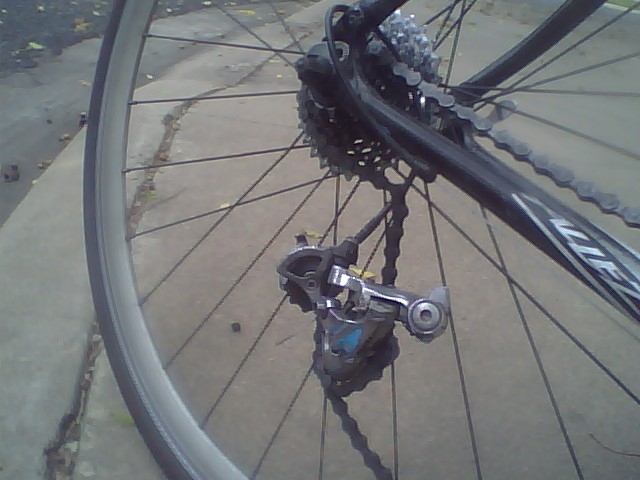 The derailleur hanger had snapped in two — clean break. I checked the spokes. Despite the contact, they hadn’t been harmed. But it was obvious I wasn’t going anywhere. The rear wheel wouldn’t turn.

I was only two miles from the house. I called my wife, and she grabbed the keys to the SUV and was on the scene in minutes.

Back at the house, I made an appointment by email to run the bike over to our club mechanic that evening. He took at quick look at it in his driveway, and said, “Derailleurhanger.com.”

“What?” I exclaimed. “You’ve gotta be kidding.”

We went into the spare bedroom he uses as a workshop and he got online. Sure enough, there it was. He called up the make and model of my bike and showed me which hanger I should order. Not bad — $22 plus shipping.

He pointed at his own bikes which hung from the walls in the room. “I’ve taken off the original hangers and put replacements on each of these,” he said. “They’re just better.”

He told me I would be able to swap out the hangers myself when the new one arrived. “It’s a five minute job,” he said. Okay, that means it’ll take me at least a half hour. I loaded my bike back into the SUV, and got his assurance that I could bring it back to him if I ran into trouble with the installation.

I ordered the replacement hanger online this morning, and got the confirmation email almost immediately. Then I sat back with another cup of coffee and watched the morning talk shows. No club ride for me today. No riding until the repair is done.