Our friend Jeff Hemmel sent me a picture the other day, with an intriguing caption:

“One of these days I’m going to perfect the J, and then work on the E, F, F part…although I may need to hop in a boat.” 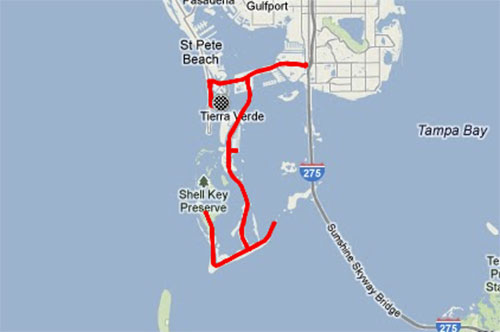 The picture was a map of a recent bike route he’d taken. Lo and behold…it sorta kinda resembles the letter J.

Living as he does in St. Petersburg Beach, Florida, Jeff is going to have to get mighty creative to come up with the E and the F.

I, however, am not hemmed in by large expanses of water — just impassable roadways. Still, I might be able to take a cue from Jeff, and come up with my own personalized monogrammed routes. Let’s see if we can do an “R.” We’ll use my route to Creedmoor, southeast of Austin, as a starting point, because there’s a more or less diagonal leg that could work as the diagonal leg of the R. 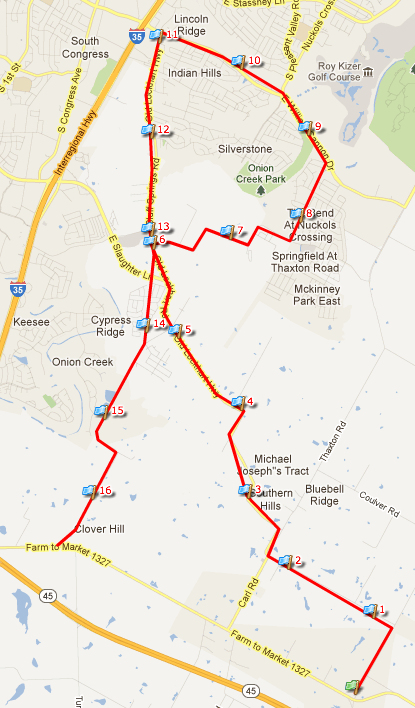 What do you think?

Okay, it’s not great. But it doesn’t take much imagination to see a capital R in there. And roads don ‘t lay out in precise alphabetical patterns.

I already have the “Y” in mind, provided a lower case version is acceptable. The tough one is going to be the “A.” I don’t think I’ll be able to work out a route with the point at the top of the letter. It would be a lot more realistic to round off the top, and a lot easier to square it off.

I suppose I can do that. The R route is just a bit over 16 miles, according to the map, so if I can figure out a way to string all three letters together, I’ll have a nice weekend ride. The “Y” is actually off to the southwest of the R in the map. So improvised Rule #1 will be: Letters do not have to write out the route according to the correct spelling. Therefore, I don’t have to come up with a route that looks like R-A-Y. Y-A-R would be acceptable. Although if I drove to the start of the R, I could cook up an A and Y off to the right (east and southeast), and spell out my name on my favorite mapping software.

It just might be worth playing around with on an upcoming cold winter’s night.