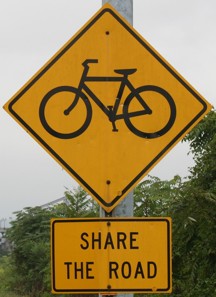 A bike advocacy organization, Bike Delaware, has come out against “Share the Road” signs. I’m sure these signs are common in most places throughout the United States — I certainly see them on several city streets near me.

I’ve always been glad to see the signs. It’s an indication that the city recognizes that cyclists use our streets and roads, and is a reminder to drivers that we’ll be out there, too. So often, when a driver gives the excuse, “I didn’t see you,” it’s likely they were not expecting to see cyclists.

But the point Bike Delaware makes is that the signs can be interpreted differently by different people, under different circumstances. The group also contends the signs serve no traffic control function.

Hm. Hadn’t thought about that before. Apparently, some drivers think “Share the Road” admonishes them to give up something they own. Why share the road when it’s mine?

I think most drivers don’t realize that bikes are treated under the law as vehicles, subject to the same rights and responsibilities as cars. “Share the Road” is a reminder that bikes have a legitimate right to be out on the roads.

But I could be easily persuaded one way or another. What’s your take?