I am proud to note that once again, I am suffering from the “Disease of Kings.” Yep, I have another gout flare up.

I have had them before, but this time, it’s different. This is my third attack in about four weeks. The first one lasted only 24 hours. The second one was with me a full week. This one got me on Friday, and we’ll see how long it lasts.

Gout is the crystallization of uric acid around a joint — often the big toe. That’s what I’ve been dealing with. It swells the joint, inflames it, hurts when it’s touched, and makes walking difficult. It’s accompanied by quite a lot of pain.

Walking the dogs around the block this evening was agony. I’m not looking forward to going in to work Monday — I’ll have to connive to stay parked at my desk, rather than walk around the building. Thank goodness I don’t have to move between buildings on Mondays.

A shot of my two feet shows right away which one is afflicted. The left foot is swollen around the joint, and the swelling has moved up the instep a bit, too. (I stood on the sides of my feet a little to show off the problem better.) 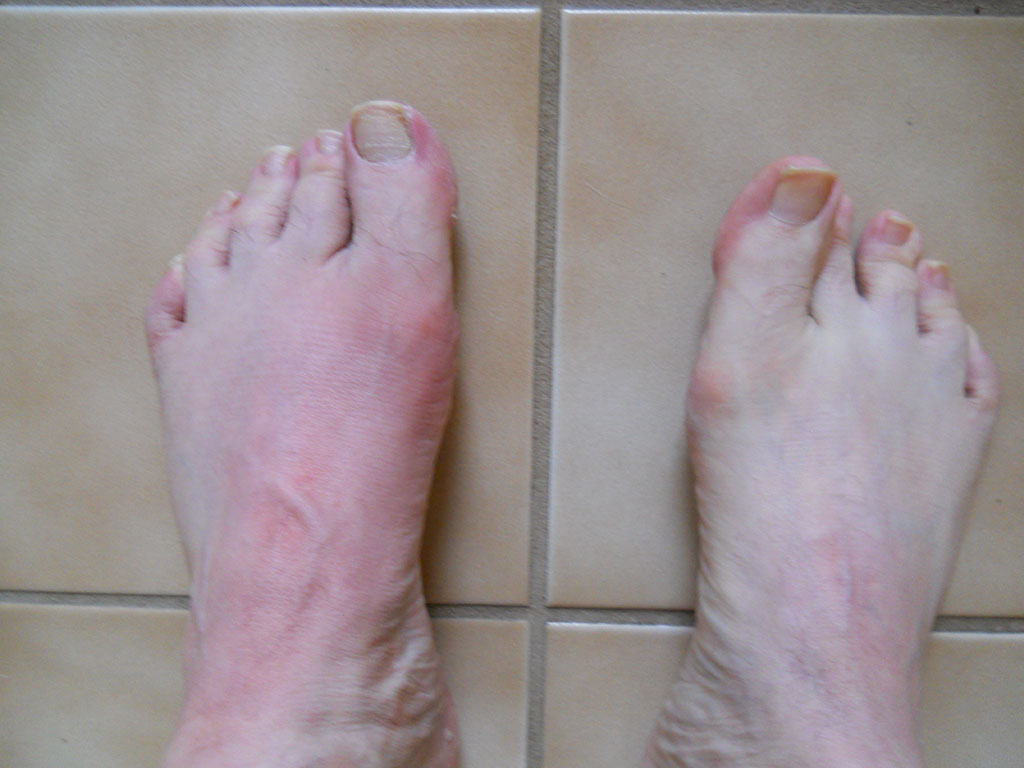 But there’s one activity that isn’t adversely affected by gout: cycling. I did a short ride with my wife Saturday morning, and was looking forward to getting out again Sunday. I was even able to cut the grass, wearing fairly stiff-soled hiking shoes. But inactivity makes the pain worse, and when I got up Sunday morning, I could hardly move. I made an excuse to skip the club ride, but pledged that when I had medicated myself and had a decent breakfast, I would ride.

I decided to stay relatively close to home, in case things didn’t work out as I’d hoped. I needn’t have worried. The rigid soles of cycling shoes are great for gout sufferers, because they inhibit the toe joint from hinging. I did a couple of quick laps around the Veloway, attacked a hill going back into the neighborhood, and racked up a nice 26-mile ride before calling it quits.

After showering and getting dressed, I found that I could walk more easily than I could earlier. The increased circulation of blood from the cycling must have had a salubrious effect. It was only after several hours parked in front of the TV watching football that I reverted to the agony of Saturday night. I limped around the block with the pooches, and downed some Ibuprofen for the third time when I got home.

When you get a gout attack, odds are good that you’ll get more. Now, my job is to control the level of uric acid in my blood. Cherries are supposed to help. There are some foods I should minimize. One of the worst things for uric acid turns out to be beer. Cutting beer — even temporarily — will be my biggest adjustment (I really enjoy drinking craft beers!).

Various cycling forums are loaded with posts from gout-suffering cyclists, so I know I’m by no means alone. I’ve taken heed of some of their tips, and will be checking with my physician at my annual physical in a few weeks to see what else he might recommend — there are some effective pharmaceuticals for the treatment of gout.

In the meantime, I’ll stick to a more-or-less regular cycling schedule. Maybe that will speed up my recovery.