I’ve been feeling guilty lately. Not because I’ve done anything wrong, or bad…well, maybe some folks would blame me for what I’ve not been doing.

I haven’t been waving regularly to other cyclists I encounter on the road. I know, it’s cycling etiquette — when you meet someone in the oncoming lane, you wave.

It seems that instead of doing that, I play “cycle wave chicken.” That is, how long do you hold off on waving before you have to? Hey, I’m not the only one. I bet half the bikers I meet are playing the same game. 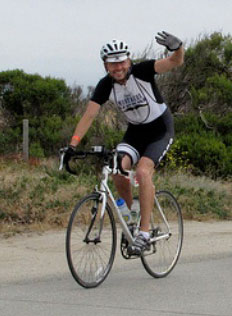 Why, just this evening, coming home from an after-work ride, I see a cyclist heading my way. I check him out — do I recognize the jersey, or the bike, or the rider? Should I get ready to wave if I know the person? Should I wait until he acknowledges me first? Oh, crap. He just waved. Both my hands are clamped to the hoods. I return his greeting with a nod of the head.

The nod. Let’s face it, the nod isn’t an adequate substitute for the wave. Sure, you’re acknowledging the other rider, but it’s kind of condescending, isn’t it? So to take the haughtiness out of my nods, I put on a big smile as I bob my head up and down. Now, I’m not being condescending. I’m just being the village idiot.

I’m not sure where this hesitancy to wave came from. Why, I can remember a post on this very blog where I took a pro-wave attitude. It’s just that, over the years, I stopped following my own good advice.

Let’s face it, lots of times, you wave, and — nothing. No one likes rejection. Get rejected often enough, and you’re going to stop doing what gets you rejected, right?

But those no-wavers — they follow a type. Most often, they’re racer wannabes. They’ve got way faster bikes than mine. Their kit is all of one type, usually a pro team, but lots of times from a local bike shop or local racing club. Clearly, I’m just not worthy of receiving their blessing.

And those aren’t the only no-wave types. Right after I bumbled the return wave today, I resolved to do better. Ah, here comes someone. No, don’t recognize anything about him. He’s not really in cycling kit. He’s got a low-end solid color jersey, and his shorts aren’t even real cycling shorts — they’re nylon, like basketball shorts. He’s got a nice helmet, though. I wave, and — nothing. Now this guy isn’t too good to wave back at me. He must be just some guy out for a little exercise on his bike. He hasn’t learned the ways of the cyclist yet.

How about this small bunch of riders coming up a gentle hill toward me? There’s a complication here. I’m on a divided street — one lane plus a bike lane in each direction, but a raised median down the middle. Now, does that median serve as a social separation as well as a physical separation? Hm. I could ponder that one for quite awhile, and while I’m pondering, they’ve already gone by in the opposite direction. I guess the way you deal with a median is, if you recognize the other bikers, you wave. If not, you don’t.

Yeah, that makes a lot of sense, doesn’t it? All right, I’ve convinced myself. Next time I’m on my bike, I will be waving. I’ll be the first to wave — again. I won’t feel rejected if the wave isn’t returned. I’ll forget it immediately, and I’ll just keep waving. Unless I’m flying down a hill at 35 mph – plus. Or unless I’m pedaling up a stiff hill, and I need both hands on the bars for added power. But otherwise — yeah, I’ll be waving.