Last Sunday morning dawned overcast and windy in Austin. It wasn’t the kind of weather to make one enthusiastic about biking.

I stared out the window as I breakfasted on scrambled eggs and coffee, wondering if I would even get up the energy to get out and ride. Heck, it was Sunday morning! If I’m going to ride at all during the week, that is THE day to go out.

I pondered some more.

Then, I got a crazy idea. My mountain bike hangs from the garage ceiling, forlorn and forgotten. What if I took that out, just for the heck of it?

I ride it every once in awhile. Haven’t been on it for months, though. And I was actually a little excited, because I decided I wasn’t going to just ride it on area streets, as I’ve done in the past. No — I was going to hit the trails!

We’ve got a large metropolitan park greenbelt close to my house. It goes on for miles. And criss-crossing that greenbelt is a network of trails. That’s where I was going to go. 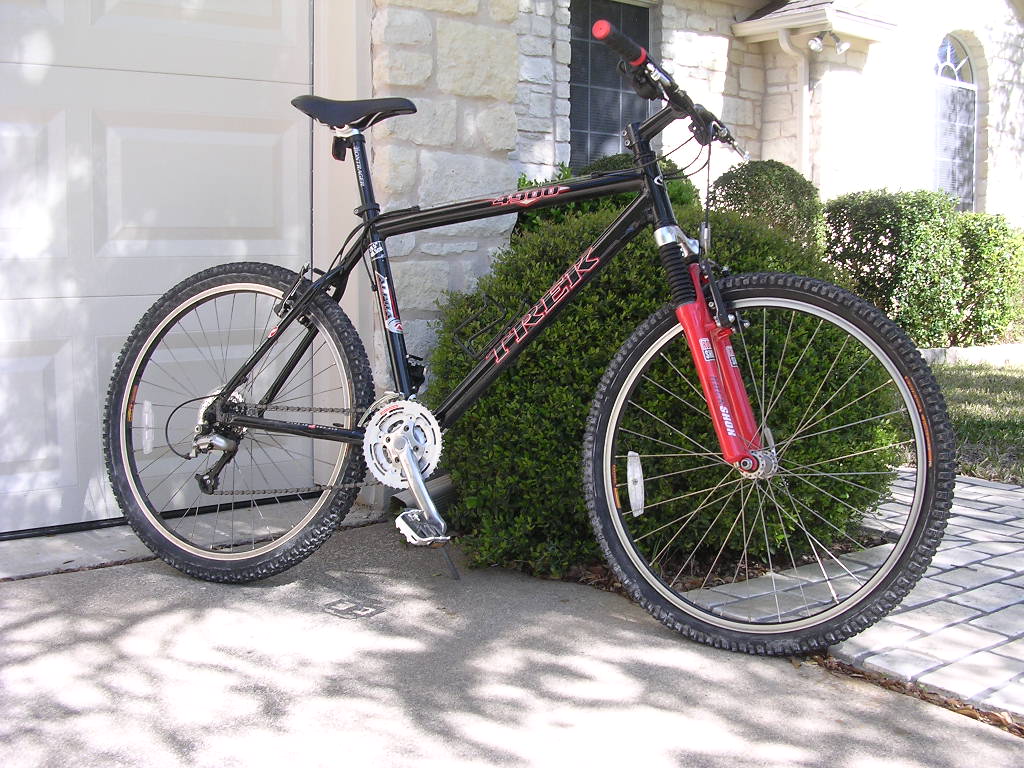 Now, my mountain bike isn’t currently set up as it ought to be for a ride on the trails. Some time ago, I pulled off the knobby tires and replaced them with one-and-a-half inch wide tires with a street-friendly tread. But, what the heck. I made sure they were inflated to about 50 pounds, stuck a water bottle in my jacket pocket (no water bottle cage on the bike), and set out.

The bike rode pretty well, although I hadn’t expected how rocky the trail was, so close to some soccer fields. A couple of times, I stopped and pushed the bike over particularly rough patches. As I got more distance under my wheels, I got more confident about tackling the rougher spots.

I had no idea where the trails led, but since they were in my neighborhood, I was familiar with generally where I was most of the time. It’s interesting how your orientation changes when you can’t see roads any more, and have only a narrow piece of single track going ziggedy-zaggedy through clumps of prickly pear and live oak.

Some crossings at dry creek beds involved a steep descent, then a steep climb on the other side. Sometimes I walked them, others I gritted my teeth and tried to stay in the saddle. At one point, the trail emptied onto a residential street that I din’t recognize. I rode the street for a block until I came to a street sign. Huh! I ride my road bike through here from time to time, but in the opposite direction. No wonder I didn’t recognize it.

Eventually, I doubled back the way I came. The trees kept me sheltered from the brisk north wind that was blowing, and I was quite comfortable. But I was getting tired. I knew I couldn’t have gone all that far, but as I’ve noticed before, riding a mountain bike takes more effort than a road bike.

When I made it home, I found I had been gone about two-and-a-half hours. That’s as far as a typical Sunday ride on my road bike. But since I didn’t have a computer on the mountain bike, I had to draw out my approximate route on Map My Ride. It turns out I rode roughly 13.5 miles. I don’t think I’ve ever been as tired after that same distance or time on my road bike.

So, have I become a convert? Not yet. But I will ride the mountain bike again. Riding single track is fun, and I know there are lots more trails around here to try out. I’ll be digging out the knobby tires and putting them back on, and getting it set up better for more frequent riding. I never thought I’d say this, but — change is good!