Guest poster Jeff Hemmel had the ride of a lifetime — or not.

Before you dismiss that headline, let me just assure you that it’s true. Yesterday, I rode to Ethiopia. I started in Florida, apparently hauled arse across the North Atlantic, beelined it straight across Africa, and finished up my journey in Ethiopia.

Don’t believe me? Just check out the nice little map that Strava compiled of my journey. As more than one person has said, hey, it’s on the Internet…it must be true. 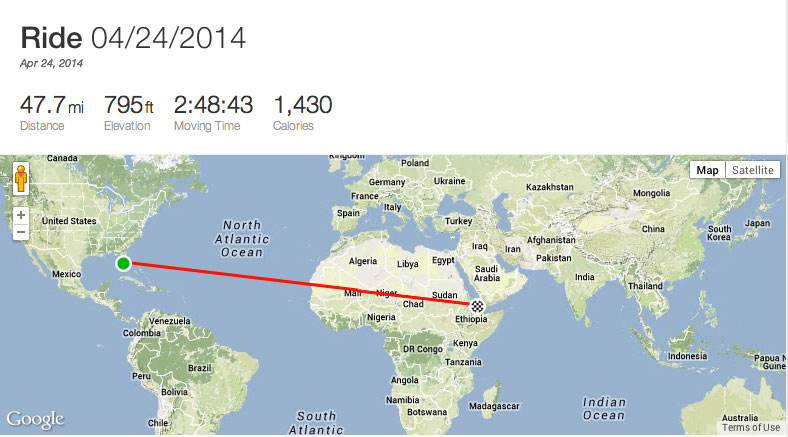 Ray has recently mentioned he’s jumped on the Strava bandwagon. For better of for worse, I’ve been there for years, logging my rides, checking my stats, even feverishly going after a few KOMs, or King of the Mountain status on certain segments. I’ve watched things go from a time when there were maybe three or four segments on a ride — mostly bridge climbs here in relatively flat Florida — to coming home, logging in to Strava, and seeing my ride measured against literally dozens of segments all over the map. It’s a complicated relationship. I know that Strava can almost wreck a ride at times, making you feel like you need to speed through an area because you know you’re being judged against your peers rather than just ride for enjoyment. But, I know it can also literally make your day when you return home to discover you set a personal best, or maybe even challenged for the almost mythical KOM on a segment you may or may not have targeted.

And, depending on the quality of data it gets, Strava can also apparently turn 47.7 miles into a monumental journey to Ethiopia.

I’ll lay some of the blame on the third party in our little menage-a-trois — my Garmin computer. It’s usually pretty dependable, but on this occasion I think it’s fair to say it was having a bad day. Ethiopia, however, was nothing compared to what happened next. Today I didn’t just get a map to Ethiopia, I got the dreaded “bad file” message. That’s when something goes kaffluey on a Garmin and your ride never gets recorded. Like it never…even…happened. It’s a measure of how obsessed some of us have become with Strava that, upon seeing that message, I spent the next 10 minutes feverishly trying to resurrect what I knew was lost. Making matters worse, I had recently signed up for one of Strava’s monthly “challenges.” I usually ignore these contests, but whatever reason this one caught my attention, a challenge to see if you could ride the combined distances of the Spring Classics — Tour of Flanders, Paris-Roubaix, Fleche Wallonne, and Amstel Gold —or a total of 787 miles in 40 days.

In fact, today, after a particularly vigorous solo ride, I was going to surpass the 787-mile mark with nearly 10 days to spare. Maybe even set some PRs in the process.

Until, that is, I disconnected my Garmin from my bike, hooked it to the computer, and gazed at the results. Yesterday, Ethiopia. Today, bad file. Oh, the horror of it — I almost cried. Like it never…even…happened.

Okay, maybe I’m hyping up my reaction a little for a funny story. After years of using Strava, I have learned to have a little perspective on these situations. It’s happened before, ironically almost always when I’ve gone out and put in a big effort and just can’t wait to see what the results are, but yet, it’s happened. And at times like these I like to remind myself that stats, or KOMs, or PRs, aren’t really why I ride. To prove it, I reflected back on the “bad file” ride, miles that passed accompanied by palm trees, sunshine, shore birds, and a brilliant view of the Florida coastline. It put me at peace.

At least, for a few minutes. Then I fired off a support request to Strava and feverishly scoured the Internet to find instructions how to reset my Garmin…before it happens again.