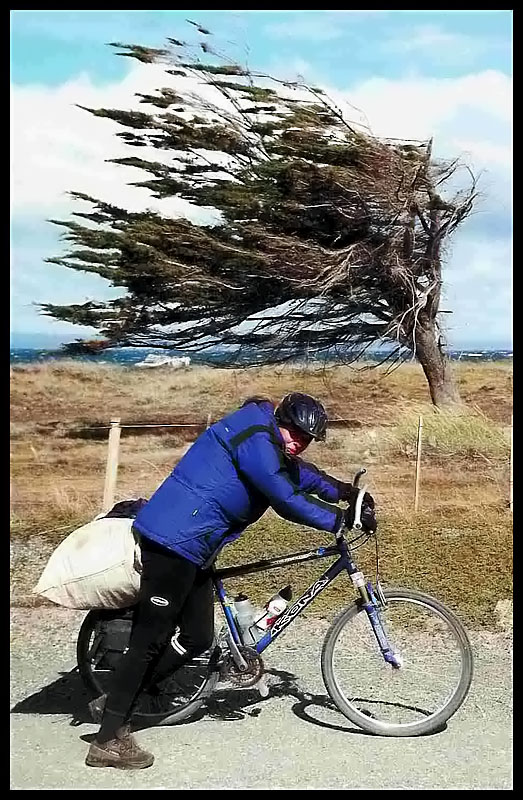 I really enjoyed my ride to the air show several days ago, except for the stiff headwind I found myself fighting on the way back. I hate wind even worse than I hate hills. Actually, I don’t hate hills — I just don’t do very well with them. But the wind is another story.

Part of my problem with the wind is my size. People in my bike club, even riders much faster than me, love to draft me on group rides, because I do such a great job of shielding them from the wind. That, of course, is what causes me big problems when I’m on my own. I’m just this human sail who finds himself slowing rapidly when I’m riding into the wind.

The problem was worse on the weekend ride, because I had miscalculated and picked a route into the wind that was at least twice as long as it would have been had I just retraced the route I took on the way out. It seemed like it would never end. Other riding-related maladies popped up as well. My bum started to pain me, and I was wearing my favorite pair of shorts. I started feeling some soreness in my lower back. It wasn’t a lot of fun.

I probably did everything wrong going into the headwind. I stayed on the hoods, for starters. Everything I’ve read says you get into the drops into a headwind, to make yourself smaller and more aerodynamic. And I committed the real non-no — I shifted into an easier gear. What you’re supposed to do is shift into a harder gear to force you to pedal harder and maintain your speed.

I even let the wind get the best of me, and stopped at the side of the road for a few minutes, to eat some fig bars and drink mass quantities of water. But mainly to rest. I always feels rejuvenated when starting off after a break, but in the wind Saturday, that feeling lasted maybe a minute.

As I got nearer to the end of the ride, I encountered some rollers again. But by this time, the wind was at my back and I could pedal up them without losing much momentum. Hills are a challenge for me. Wind is a chore, an adversary, a powerful foe.

Well, there’s only one way to deal with it. I have to tackle it head on. We’re having a particularly windy spring this year, and I’ll be looking for a stiff headwind on my upcoming rides. Maybe by the end of the summer, I’ll have the same attitude toward the wind as I do toward hills: tough, but doable.