Had a nice ride Saturday morning on a favorite route of mine — the so-called “Zoo Ride.” But I don’t often do the Zoo Ride on Saturday, and I was taken aback by the amount of traffic as opposed to Sunday.

Of course, there’s always going to be less traffic on Sunday. It’s just that, on one section of the Saturday ride, I felt like I was contributing to the problem. 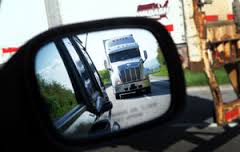 It’s a two-lane road called Thomas Springs. It’s a nice connector between two other roads on the route, only about a mile and half long, but it has no shoulders to speak of. That hasn’t posed a problem for me in the past. But Saturday, I could hear the rumble of a big diesel engine behind me, and a quick glance over my shoulder revealed an 18-wheeler with a flatbed trailer, hauling a bulldozer.

He could have passed me easily — most other days. For some reason, though, the oncoming traffic was, if not heavy, steady. It seemed that whenever cars heading toward me went past, there was another one off in the distance. He didn’t have enough space to pull around me and speed up as much as he’d need to before the oncoming car met him face to face.

For my part, I started feeling uncomfortable. I was cruising at 26 mph. The chances of going faster were minimal, because of slight upticks in the grade I was traveling. Even though I had the right to take the lane, there being no room for both of us to occupy it at the same time, I hugged the white line at the right edge of the road — hoping he’d get just enough of an opening to get by me. I started looking for bailout spots along the way, but very few roads empty into Thomas Springs. The best option was blocked by the large FedEx delivery truck trying to make a left turn. If I braked to make a quick right where the truck was, two bad things could happen — the 18-wheeler would have to brake, too, or I might miss my turn and hit the FedEx truck.

So, my only choice was to keep pedaling hard and try to get the 18-wheeler up to the next stop lighted intersection as quickly as possible — quick being a relative term.

Now, in my experience, professional drivers like the guy in the 18-wheeler are pretty savvy when it comes to bikers and the rules of the road. I don’t much like to be around taxicabs, or buses, but big trucks have never really bothered me. And this guy appeared to be the epitome of patience. He never revved the engine to let me know he was there (as if I couldn’t hear it just fine), he never honked. He waited for his opening, and it finally came.

About 400 yards before the intersection, there were no more oncoming cars. He pulled out around me, passed rapidly, and settled in for a red light at the corner — a light that mercifully turned green just before we got there. He turned into the cross street, I zoomed across the intersection, and we went our merry ways.

Everything happened as it should have. He waited for his opening, I held my position. But I felt guilty holding the guy up. Have you ever had a similar feeling?