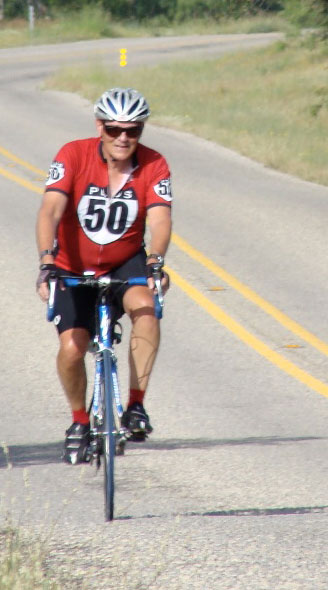 When I started cycling about six years ago, I was gratified by how quickly I seemed to improve. I built up the number of miles I could ride, I lost a little weight, I recovered from strenuous efforts faster.

But after several years of riding, I fell into a rut.

My long rides weren’t very long — it was rare that I roe for more than 40 miles. I found there was no way I could hang with the A riders in my club, and I was starting to have trouble handing with the B’s sometimes, too.

The lack of improvement got me into a funk, and I was unmotivated to do much riding at all. Heck, I was spending more time organizing my stamp collection than riding the roads around here (not that there’s anything wrong with stamp collecting).

So the question became, how do I get back on track?

For me, there was no blinding flash of light on the road to Damascus. I noticed that little things were coming together — over time, not all at once — and that my interest in cycling was picking up again.

A small, but dependable, group of B riders came out for our Sunday club rides. Sure, maybe there would be only two or three of us on any given week, but at least we could ride at our own pace, and not worry about being dropped by the main peloton.

We started doing variations on our usual rotation of rides — adding new routes or modifications to old ones, so we weren’t riding the same routes over and over.

And then I got Strava. Now, lots of people hate Strava. In fact, I was one of them — as long as I didn’t have it. And even after I started using it, I ran into some problems with data discrepancies between it and my old bike computer.

But I’m finding the thing about Strava that is helping me improve my cycling — perhaps more than any of the other changes I’ve mentioned — is its segments feature. Routes are broken up into segments, which are created by cyclists. And you can compare your times on certain segments with times of other riders.

For example, I do laps around our Veloway two or three times a week. One of Strava’s segments is the “Veloway Loop,” almost a complete lap of the 3.1-mile track. I was a bit disheartened when I started using Strava, because it clocked times around the Veloway that were much slower than I thought I was riding it. Often, 11 or 12 minutes a lap were the best times I could manage.

Now, back when I was just getting into cycling, and constantly improving, I know I could circle that track in less than 10 minutes. So I started paying closer attention to my Strava times for the Veloway, and checking the times of acquaintances to see how they stacked up against me.

I guess I could have gone all out and tried for a Personal Record, or PR, each time I did a lap. Instead, I continued to ride my routine laps. I registered a 10:04 — not too bad, but not what I was after. A couple of weeks later, 10 minutes flat! Only four seconds, but that nice round number represented something of a benchmark.

Depending upon how I feel on a given ride, I might or might not push it a bit when I reach the Veloway. If I was going to set a new PR, it would have to be when I was still relatively fresh — and usually, the Veloway lap comes near the end of my ride, not the beginning.

This morning, I reached the Veloway 12 miles into my ride. I hadn’t thought about a PR, but then noticed how effortless my pedaling was this day. That was on account of a brisk tailwind, and that could be good for my time. But it would also work against me on the backside of the lap, when I was dead into it. What the heck, I thought. Let’s go for it!

I applied an even effort around the track, drawing encouragement whenever I passed another cyclist. When I swerved through the ess curves near the end of the lap, I hit 23 mph — I try to reach 22, so this looked good.

Then, on the way home, I got a green light at a major cross street, and powered up an easy, half-mile long hill past a supermarket. This one has been giving me fits, too, but again, it looked like I’d have a decent outcome.

So yes, I’m improving again. Not only are my times getting faster, slowly but surely, but my interest in biking has come back. Biking isn’t all about fast Strava segments. It’s about the ride. After some time in the funk, I’m enjoying the ride again.