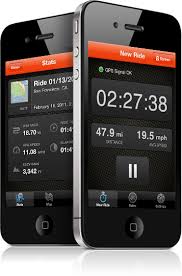 On that ride over the weekend where I ran out of gas, I also had another setback. When I got home and took out my iPhone to upload my Strava data — there was none.

I use the free version of the Strava app for the iPhone.

When we do our club rides, I start Strava when I leave my house. it’s a mile to the Starbucks where we start our rides, and I have about 15 minutes to sit around and chat with other riders before we leave. It occurred to me that while sitting in a chair, I might have leaned against the chair back, and that could have pressed a button on the app.

Well, maybe that happened once (I can’t say it did), but since then, I’ve been making sure I don’t sit in a chair.

But I do take a long break in the ride. As I said, 15 minutes before the club ride. During the ride, I often stop for another 10-15 minutes to rest, refill water bottles, and shoot the breeze. That pause doesn’t seem to affect Strava, because it’s recorded data on those rides more often than not.

On those times when it zeroes out the data, I have noticed that Strava is open to a different page when I take the phone out of my pocket. Instead of being on the “Record” mode, it is on Challenges, or something in the “More” section, which includes the Strava Shop, or the link to Premium. It’s when I click back to Record that I get zero.

I have no clue what’s causing it. Have you had any similar experiences with your Strava?