Not that long ago, fueling a longer ride seemed to be all about things like gummy chews, sticky goos, and sickly sweet drinks colored by chemical dyes that, after an extended ride, could actually end up upsetting your stomach. Sure, some of us went the banana/fig newton/water route, but let’s face it — a lot of us downed stuff with colors, tastes, and “energy” provided by a long list of artificial ingredients.

But just like fast-food restaurants have suddenly started to pare down their ingredient lists to simpler, real-food choices, athletic foods and drinks have begun to blaze their own natural path.

Probably the biggest proponents of natural foods in recent years have been Dr. Allen Lim and chef Biju Thomas of Skratch Labs. Lim had extensive history working with high-profile pro teams, and famously switched riders over to a homemade drink mix that avoided chemicals and artificial flavors and colors in favor of minimal, natural ingredients. Example? Guzzle some Skratch and that raspberry or orange you taste is the result of freeze-dried fruit powder, not some sketchy flavoring. (Want sketchy? Google “castoreum.”) When it came to food, the pair elected not to produce a packaged product, but instead write a cookbook, teaching riders how to make goodies like homemade sushi rice cakes. I’ve tried several recipes, as has contributor Don Blount (https://bikenoob.com/2012/07/19/sushi-rice-cakes). They’re pretty easy to make, and allow you to include things like eggs, bacon, soy sauce or liquid aminos to satisfy salty cravings, or go a sweet route with berries and chocolate chips. When Skratch ultimately did come out with their first packaged food product this year it was actually a cookie mix. Add an egg and a stick of butter, toss in chocolate chips or your favorite fruit, and you could actually power your ride not with a gel or goo, but with cookies. Turns out with the right ingredients they’re not all that different from energy bars, and with fewer ingredients, easier to digest.

The food giants haven’t been immune to the trend. Clif recently released an “organic energy food” made from natural ingredients. Flavors include savory/salty mixes like Pizza Margherita and Sweet Potato with Sea Salt, or sweet choices like Banana Beet with Ginger and Banana Mango with Coconut. The consistency is kind of like baby food or apple sauce. But many people will note that, like Lim’s savory rice cakes, the salty choices actually hit the spot quite well on a long ride. And who isn’t occasionally interested in something sweet?

One reason to go the organic route, whether homemade or packaged, is that the results typically have a much higher moisture content. Your body will more quickly absorb energy, as water won’t be robbed from your body for digestion. By their very nature, real-food products are also easier to digest.

An interesting note? As companies like Clif have embraced organic offerings, Skratch just recently released its first pre-packaged product — a gummy fruit drop that takes aim at products like Clif’s Shot Bloks or Honey Stinger’s Energy Chews. Skratch avoids the carnauba wax that companies like Clif use in their gummy blocks, and the flavor, like the drink, is provided by actual fruit. Still, it’s a notable departure.

How about you, are you still guzzling Gatorade and eating Crayola-color gummies, or do you fuel yourself with “real” drink and food choices? Have some experiences, or even recipes to share? Give us your thoughts in the comments below.

Here are some of the healthier options mentioned in this post.

Have trouble staying hydrated on rides? Guest poster Jeff Hemmel may have a solution.

Like I suspect most of you, I rely a lot on sports drinks. I may start my ride with a bottle of water but ultimately, especially in my Florida climate, I’m reaching for something more potent. And I don’t like any of them. The tablet-style mixes may be convenient but their fizzy “texture” makes me gag. I find other mixes weak and watery, with a strange artificial flavor. I’ve settled on cheap, Gatorade powder, although I find its syrupy sweetness gets old fast on anything but a short ride. It’s also packed with sugar and calories.

That’s why my curiosity was piqued last summer when the rumors started swirling about pros using a new, not-for-sale drink mix. Like many of us, pro riders were getting sick — literally — of their sports drinks, resulting in upset stomachs and dehydration. The riders in question happened to be working with Dr. Allen Lim, the renowned sports physiologist who worked with Garmin and later Radio Shack. Lim tried just about every drink on the market; none proved a winner. Cut a syrupy drink with water? It doesn’t work. The sugar might be right, but the electrolyte content gets too diminished. Lim called in a friend, Stanford professor Dr. Stacy Sims, and the two began to develop their own home-brew that had less calories, more salt, and featured absolutely no artificial colors or flavors.

All this wasn’t for resale — this was to hydrate pro riders, many of whom had drink-related sponsors. That’s how the drink ultimately got its tongue-in-cheek name: Secret Drink Mix. Only after more and more people heard of the mix and wanted to buy it did the pair ultimately offer it up for sale through a website so low-key you almost had to be a cycling insider to find it.

Apparently there are no anti-caking agents or preservatives, so they sell these tins to keep the stuff dry and from turning into concrete.

Interesting story, but what matters to the recreational rider is how it tastes…and works. The first thing I noticed about SDM was that it actually has a clean, almost refreshing taste. It’s not watered down, but light, with no syrupy sweetness that will haunt you after the first bottle. It tastes like fruit because, well, that’s what it is. Flavoring is provided by freeze-dried fruit powder. While the weather was still hot, I noticed a drank a lot more of SDM simply because I wanted refreshment, not because I knew I had to force myself to hydrate.

I also noticed I felt a little fresher after my longest rides. At first I chalked it up to my imagination, but then I noted those empty bottles. I think I was simply staying more hydrated. As Lim recommends, I was using my drink for hydration. Serious calories came from Clif Bars or the like. (There’s some interesting science to back up that assertion if you want to do a little searching on the Internet.)

The ultimate test is what happened after I used up my free sample. As it’s not cranked out by a sports drink behemoth, SDM is expensive, about $1 per bottle. I went back to Gatorade, but now knew what I was missing. So yup, I actually bought a pound of mix. As a family man with other things to pay for, I plan to ration it for bigger rides or the occasional race. It’s that good. The only other minor downside is the mix’s ratio. It’s 500ml per 16 ounces of water. Most water bottles hold 21-24. 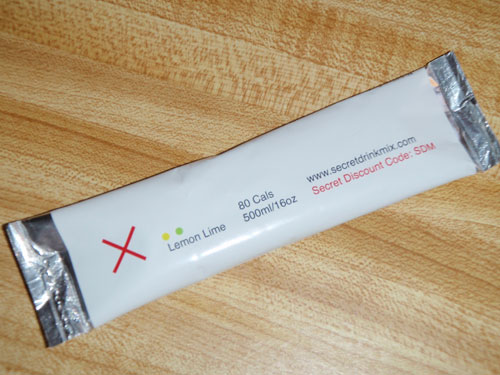 SDM also comes in these single-serve packs. They’re pretty generous…threw in a handful of other flavors with my order.

For those of you not satisfied by your drinks, I’d suggest you give it a shot. There are codes on the Internet (SDMFACEBOOK) good for about 15% off. Reviews have been quite positive.