Two of my biking friends recently had unpleasant encounters with drivers. In one case, a car passed unnecessarily close to a cyclist, and he was concerned about being hit. That didn’t happen, but it upset my friend enough that he followed the car to the next stop sign, and started a dialogue about car-bike safety.

The driver didn’t take to it well, and my friend — one of the most mild-mannered folks you’d want to meet — thought it could have escalated to blows. He pulled away and continued his ride.

My other friend is naturally cautious while riding the roads, and most often stays on the suburban-style residential streets in our immediate area. But even there, problems can arise. At a stoplighted intersection, he had the green light and started across the intersection. An oncoming truck started to turn left across his path without signaling. My friend yelled and waved, and the truck stopped just five feet from him.

“I would have let it go at that,” he said. “But then he starts yelling at me like it was my fault. I had the right-of-way!”

He threw down his bike and started toward the truck with clenched fists. Believe me, you don’t want to tangle with him one-on-one. The truck driver figured that out, and drove on.

“What gets me is that some people figure if they’re in a motor vehicle, they’ve got the right of way,” my friend said. “They need to be better educated about the rules of the road regarding bikes.”

The guy in the first incident had another point of view. “We really need to start showing our neighbors who we are,” he said. “We’re just like them. We live in the same kind of houses, we work jobs — the only difference is, we choose cycling as a form of exercise or recreation.”

He suggested making an affirmative effort to talk to our neighbors about our biking, why we do it, how we hope cars behave around bikes, how they should expect bikers to behave around them.

People for Bikes, an organization that aims to promote cycling to more prominence in public discourse, offers the same idea in this video. 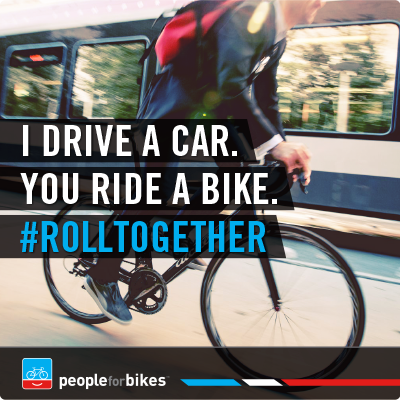 Others suggest that as more people ride, biking will become more a part of our culture. This article on Business Insider urges more commuting by bike.

I agree with all of the above. I’m just not optimistic that things will change much. Recently, the city laid chipped stone over a lane of one of the main streets in our area. As my wife was riding along that section, a pickup truck passed her, and spun his wheels to throw the stone-gravel mix at her. “Some people,” she said, “are just asshats.”

Every so often, we hear of a car-bike accident that leaves the cyclist dead or severely injured.  We shake our heads and cluck about the sorry state of affairs.  Maybe we even keep tabs on the case, to see what (if any) penalty is imposed on the driver.

The Bicycle Accident Victims Assistance Fund is designed to help bicyclists defer non-legal expenses.  The Bicycle Accident VAF is made possible by donations and in-kind services from corporations, foundations, individuals, government agencies, participants of organized events, and philanthropists, club and team memberships.  They also sell RiderID — a sticker you attach to your bike that connects you to a national registry of rider information.

The second fund is called the Bicycle Accident Legal Defense Fund (LDF). This is the one that helps with legal bills, and according to the BAVF news release, is funded by annual memberships from law firms.

To qualify for assistance from these funds, the bicyclist must not be at fault in the crash, and must be in the 48 contiguous states or the District of Columbia.  Sorry, Alaska and Hawaii.

The fund is just starting up.  It will accept applications for funding for crashes that happen after December 31, 2010, and expects to start paying out sometime during the first quarter of 2011.

It’s an interesting — and in my view, welcome — concept.  I’m not sure about the RiderID, though.  It strikes me as much the same thing as RoadID — but stuck to the bike, instead of worn by the rider.  Frankly, I don’t want a sticker on my bike.  I’ve had bikes in the past that I had to put registration stickers on, and they’re not aesthetically pleasing.  I wonder if the BAVF could have partnered with RoadID to do something similar.

In fairness to the RiderID concept, the BAVF news release notes that 100 percent of the proceeds from the sale of RiderID will go to the Bicycle Accident Victims Assistance Fund.

In any case, I’m glad to know that cyclists who find themselves on the losing end of a car-bike crash now have a way to recover some of the costs of recovery.