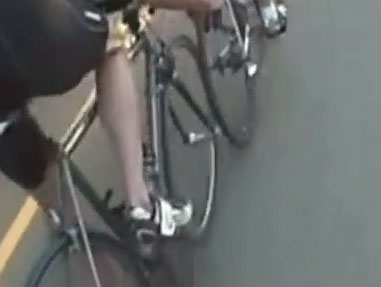 I’ve got a time trial coming up next week, and I’m feeling pretty good about my chances at beating my personal best – if it doesn’t rain. And if the wind stays down. And if I don’t get a stitch from drinking too much water before my run.

A friend suggested another way for me to beat my PB. He said I should get a set of aero bars for my bike. That’s something I had never considered. I’m considering it now, but doubt that I’ll do anything about it just yet.

One guy in my club says the aero bars on his bike are good for an extra 2 mph. There’s got to be some support for that, or all the hardcore TT riders wouldn’t be using them. But what about regular riding?

My friend Bob, who I rode with on the MS 150, has aero bars on his bike. When he was ahead of me on straightaways, he would get down into sort of an aero tuck. Not only did he start to slowly pull away from me that way, but they also gave him another position on that long ride. Getting down on the bars from time to time helped keep him fresh.

But while it’s a different position, it’s also an unstable position. If you watched the Tour de France opening time trial, you probably noticed that the riders stayed in their aero crouch as long as possible, but when they came to turns, they had to get on the handlebars.

That’s why a lot of organized group rides prohibit aero bars. They want to prevent crashes that can happen if someone on aero bars gets too close to another bike, and accidentally bumps it, or even if they hit a bad piece of pavement and get knocked off their line. It’s not easy to get instantly from elbows on pads to hands on bars and regain control before the bike goes over.  Besides, if you’re riding in a group, you don’t even need aero bars. The peloton will pull you along.

What’s your take? Have you used them? Do you like them? Will you try them? Or have you decided they’re just not worth the bother?