I saw something interesting the other day. It was a road bike out for a spin in the neighborhood, but he had one very distinctive feature on his bike: a rear rack.

Now, racks aren’t all that uncommon for long distance riders. Randonneurs, who are going to be on the road for a minimum of 125 miles (200Km), make a point of mounting racks on their bikes to carry larger loads than the typical rider. But this guy obviously wasn’t going to ride all day. Although I hadn’t seen him before, it was evident just from his appearance that he was going to stick close to home. So why the rack?

Well, apparently some riders also want to carry a little more than just some flat fixing items. Commuters, for example, often use a second road bike and fit it with a rack to carry their work sundries.

And one of the basic problems you might encounter if you decide to mount a rear rack to your road bike is how to attach it. Road bikes don’t have the braze-ons needed to screw in the rack mounts. With a little ingenuity, it’s possible to do a workaround to get the rack to fit.

So — would you put a rack on a sleek road bike? What are the advantages? If you’ve already done it, I’d love to hear your experiences.

When I am asked why I selected this new car I respond one of two ways: 1) It is my mid-life crisis car or 2) It fits my bike rack. 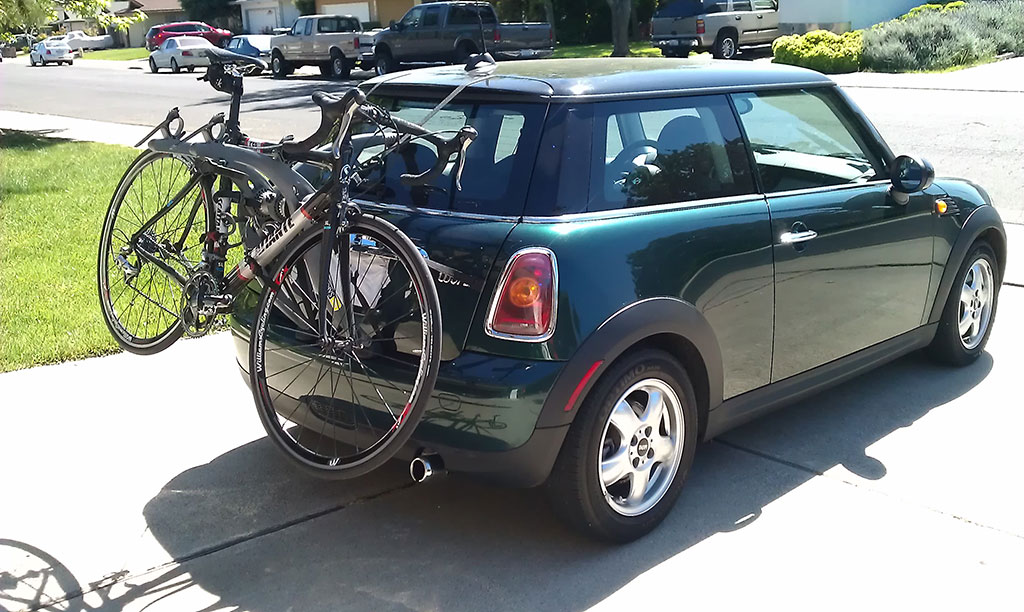 And in truth when I looked at the vehicle I took along a tape measure to check whether the width of the bumper would accommodate my Saris Bones 2 trunk mount bike rack.

I purchased this bike rack three years ago, after I joined a bike club. A number of the club rides began in the foothills, a good 40-minute drive from my home.

Quite frankly, I tired of taking both wheels off of my bike and then loading both the frame and the bike into the car.

I did not want to deal with a trunk hitch nor did I want to spend a ton of money on a rack. And when I began looking for a bike rack I discovered the Saris. 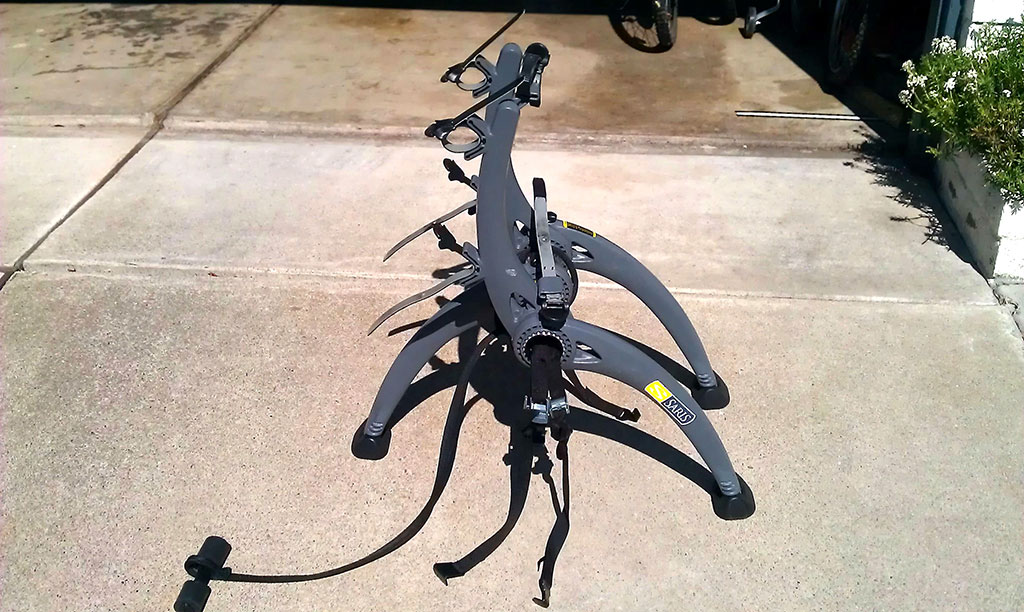 It was the look that initially caught my attention. I liked the arc shape of the injected molded, arms and how the bike is carried away from the car where it won’t scratch the paint. It also holds the bikes on two different levels so they do not bump into each other, damaging their finish. 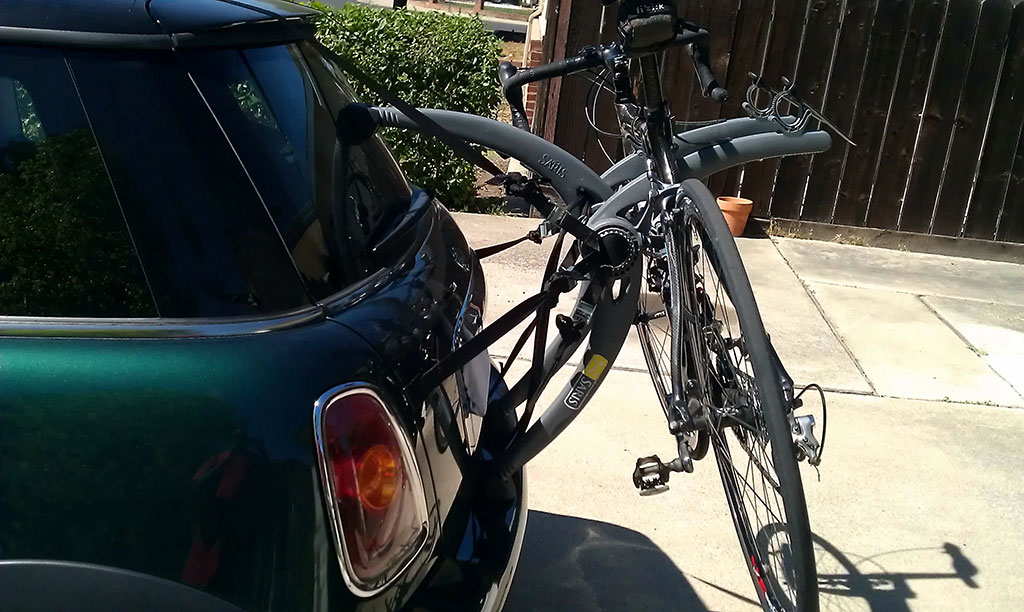 Although it is categorized as a trunk-mounted bike rack, the rack actually rests on the vehicle’s bumper. 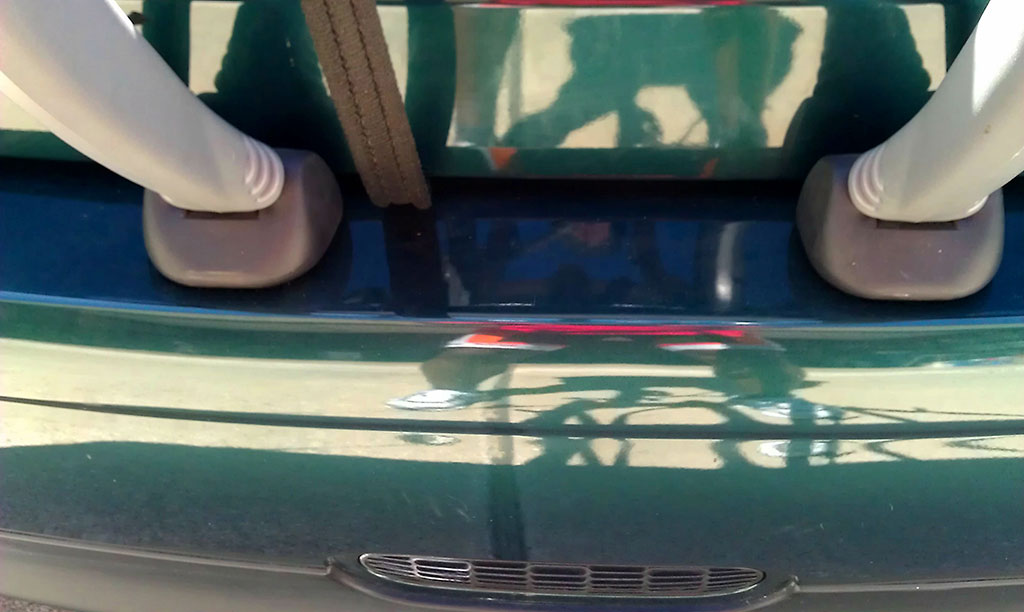 It took me some effort to set the rack up the first few times but I eventually was able to get it ready to go in about 10-15 minutes.

The rack has a 70-pound limit – 35 pounds per bike. I found that it holds my bike securely and the anti-sway bar prevents it from swinging while the car is in motion.

The rack’s rubberized feet and coated hooks are gentle enough to not mar the car’s paint.

I added to the rack a Yakima trunk mount security strap. The strap has some sort of cable in it for reinforcement. One end of the strap loops around the bike rack while the other end goes in the trunk.

The space between at the top of the hatch of the new vehicle was too narrow to secure the rack’s original hook; I had to replace those with hatch hugger straps. These go inside of the hatch instead of hook onto the edge of the hatch. 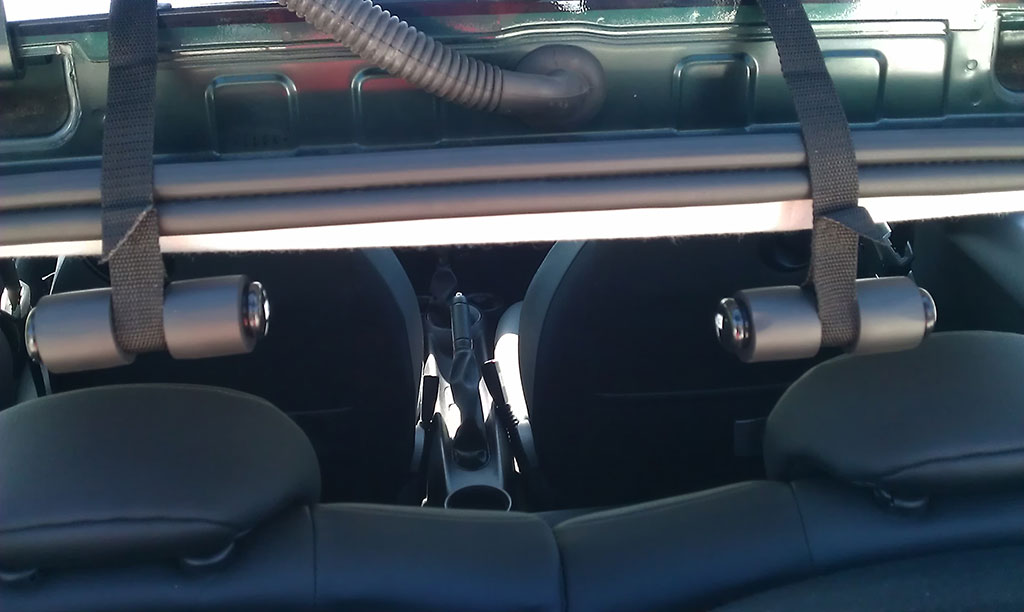 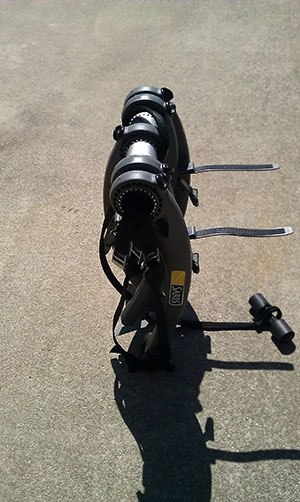 The Saris Bones 2 retails for about $140 but it can be purchased on sale for about $125, maybe even less at a good bargain. I paid $117 for mine and $17 for the strap in 2010. Prices have not moved a whole lot since then. The company also says the rack carries a lifetime warranty. It also folds for easy storage.

A couple of years ago, Pat and I both rode in the same organized ride. To get there, we put our bikes in the back of our Honda CR-V. But it was a tight squeeze, and we had to take off the front wheels and lay one bike on top of the other. We didn’t like the arrangement.

It just so happened that in our goodie bags for that ride, we found a coupon for a discount at a local rack store (Rack Outfitters of Austin). I drove over there, told them what I needed, and they fixed me up with a Yakima King Joe 2 rack. Now that I’ve had it for awhile, I think it’s time for a product review. 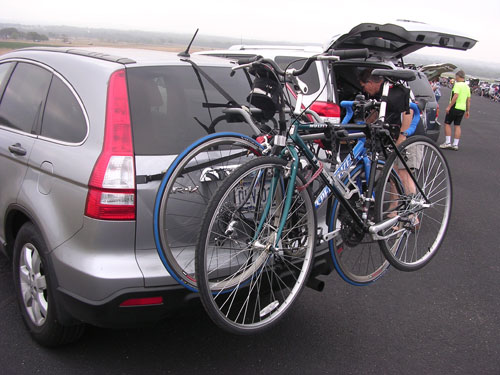 The rack holds our bikes as we arrive at the recent LBJ 100 ride.

The King Joe 2 holds two bikes. Perfect for our household, since there is only the two of us. It’s much like racks made by a number of manufacturers, that fasten to the back of the car or SUV by a series of straps. If you pull the straps tight, you should have a solid mount for your bikes.

The straps tangle easily. They can be a headache to line up correctly, but that’s the key to getting a secure mount. Yakima provides rubber “keepers” to thread the straps through, in order to minimize loose, dangling straps. However, one of the keepers broke, and I wrap that strap around a metal leg and fasten it with a double half hitch. 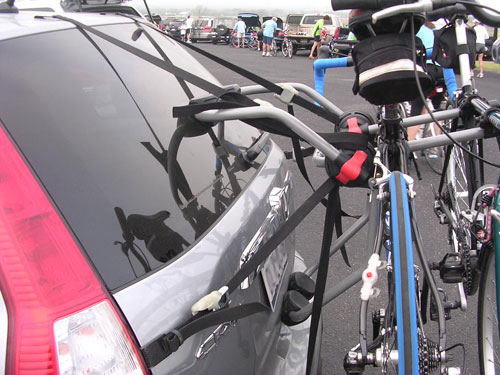 A “keeper” is visible near the bottom of the picture, near where the strap fastens to the lift gate. The rubber pads to protect the car’s finish can also be seen.

If you don’t adjust the straps correctly, you’re jeopardizing your bikes. Earlier this year, we were driving to a ride and I noticed in the rear view mirror that the bikes were canted at an angle. It turned out the straps were wrapped around each other, and weren’t gripping as securely as I’d like. If we had gone another five miles, I think the bikes would have fallen off. Now, I allow extra time to mount the rack, just to make sure the straps are pulled as tight and straight as can be. 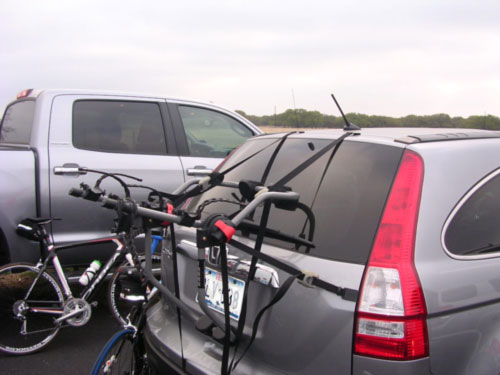 That, and the torn keeper, have been the only glitches I’ve had with the rack in three years of use. However, there is one other feature I’m less than crazy about. The bottom of the Honda’s tailgate doesn’t allow the straps to attach with hooked fasteners. So the guys at the rack store fitted hard rubber bumpers — they look like small dumbbells — to the straps that attach to the bottom of the tailgate. You start mounting the rack by lying it on the ground behind the vehicle, then jamming the bumpers against the inside edge of the tailgate jamb. Close the gate, lift the rack into place, and tighten the straps. I’m sure it’s not as secure as it would be if the hooked fasters could be used. It works, though.

By the way, the hooks on the other straps are rubber coated, so they don’t damage the car’s finish.

The bikes fit into plastic cradles on the extensions that protrude from the rack. Each is firmly secured by three rubber straps that stretch tightly over little knobs. Once in place, the bikes won’t move.

Back in the 1980s, we occasionally traveled with bikes to ride on rail trails in Minnesota. I bought a bike rack then, but it was such a poor design that it threatened to collapse and drop the bikes onto the highway. I turned around and went home, took the bikes off and threw the rack in the garbage. It’s nice to see that rack design has progressed and that bikes will now stay on your vehicle all the way to your destination. But I still spend a lot of time checking the rear view mirror when I’m hauling them.