I’ve mentioned before that I work at a university.  One of the things I’ve noticed as I hit town during my daily commute is an increasing number of cyclists on the road, biking to and from campus.  I think we’re all noticing more cyclists lately, because of high gas prices, but the ones I’ve been seeing are worth a comment.

More and more cyclists seem to be practicing what is called “vehicular cycling,” where bikes take their place among other traffic on the road, and cyclists follow the same rules cars must follow.  This morning, one fellow waited in a left turn lane about four cars back from the stoplight.  When the light changed, he pedaled hard to stay with the flow of cars around the corner, then reached the bike lane on the road he was turning on to, and settled in.  The cars behind him were not delayed by following a bike.

A four-lane road leads from the interstate highway toward campus.  This morning, a cyclist rode “as far to the right as practicable” and moved at a pretty good clip.  Cars passed him closely, because there’s no room for a bike lane on this road, but there is enough room for two cars and a bike — if everybody pays attention.

Of course, there are always some jerks, but that’s not what this post is about.

As a larger number of cyclists ride according to the rules of the road, that boosts the chances that motorists will be more likely to accept their presence, and perhaps ease the antagonism between cyclists and drivers.

And before you ask — no, I’m not one of the bike commuters.  Unfortunately, I live 30 miles from work, and riding there is not a realistic choice — for me.

From time to time, I just get fed up with riding on roads with heavy motor vehicle traffic. Wouldn’t it be great to have a nice chunk of acreage all to ourselves?

On our recent vacation to northern Michigan, we got to experience what that might be like. We took a short side trip to Mackinac Island.

Mackinac (pronounced Mack-ih-naw) Island sits in the Straits of Mackinac, between Michigan’s Upper and Lower peninsulas. It was strategically important during colonial times, and was fought over during the War of 1812. But now, it’s a quiet resort, a “theme park for adults” some call it, but not in the sense that Las Vegas is a theme park for adults. Mackinac is much more sedate. 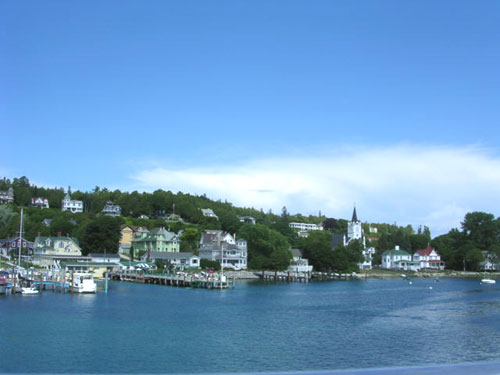 A short ferry ride gets you to to the island. There’s no bridge from the mainland.

The main reason for that placid atmosphere is that motor vehicles are banned from the island. If you want to get around, you ride a bike or use a horse-drawn vehicle. That fact of life makes for scenes that aren’t common in the rest of the country. 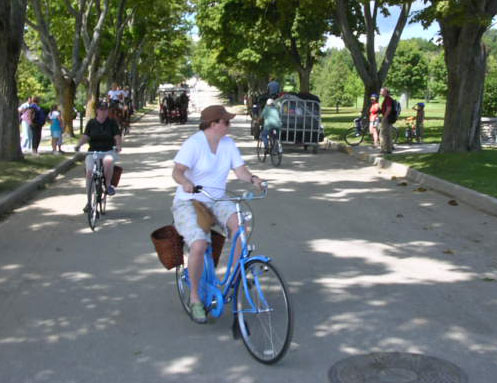 Getting around on Mackinac Island — bikes, horse drawn wagons, and foot power.

Pat and I stayed with our friends Brad and Linda at the Grand Hotel, built in 1887. Maroon coaches with liveried drivers carry guests from the ferry docks up to the hotel. 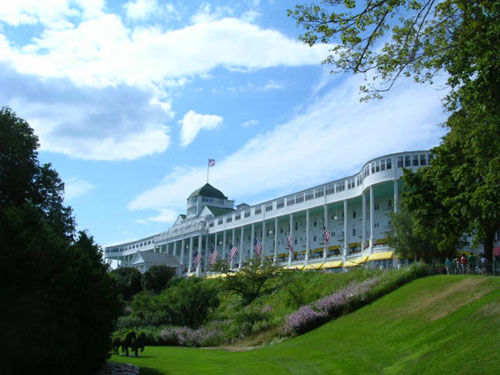 The Grand Hotel. Men are required to wear jackets and ties for cocktails and dinner. 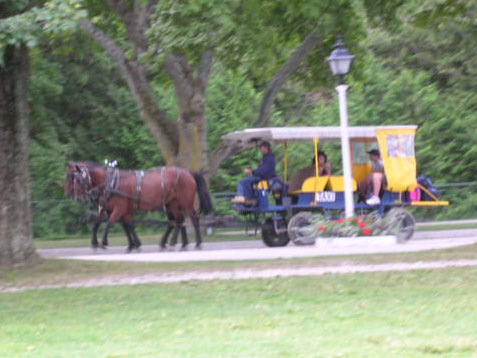 Rental bikes are available at a number of places near the ferry docks. The bikes are nothing special — lots of beach cruisers and six-or-seven speed hybrids. I think we saw two road bikes the whole time we were there. 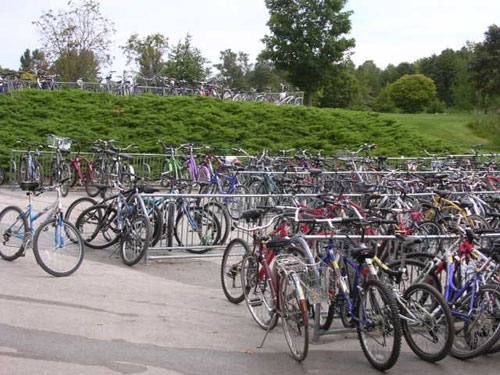 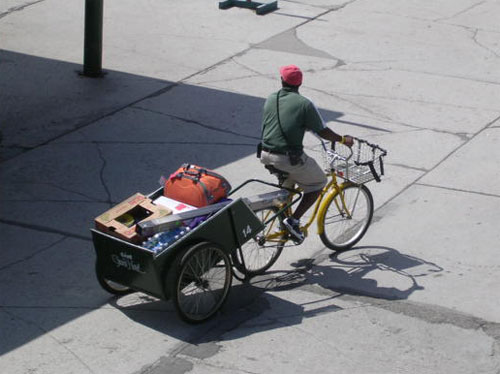 With no motorized traffic, bikes handle a lot of heavy work duties.

We didn’t do any biking on the island. We were there for only 24 hours, and with cocktails, dinner and dancing in the evening, and golf the next morning, we had no time for anything else (The hotel’s golf course has two nines on different parts of the island. A horse drawn shuttle takes you between the two nines). 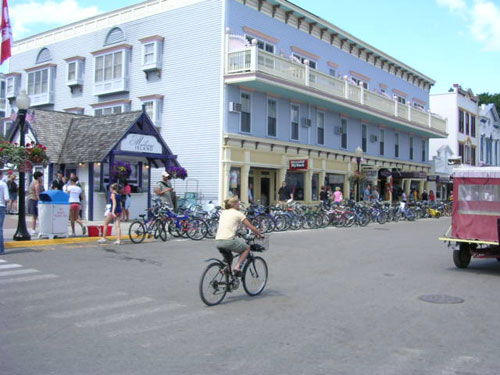 The island’s main street. Bike traffic was surprisingly light when we walked along here.

If there’s a down side to spending time on Mackinac Island, it’s that some people on bikes are people who don’t ride much otherwise. So they ride with no attention to rules of the road, and little consideration for pedestrians. Many of them show off their lack of biking skills by weaving back and forth, and struggling to keep their balance. But they’re a minority, and the alert pedestrian can see those kinds of riders in plenty of time to move to a sidewalk.

It’s a charming place, with fudge shops every few steps, a Revolutionary War-era fort with period weapons displays during the day, and always, a pleasant breeze off Lake Huron. Members of the slow biking movement will feel right at home here.