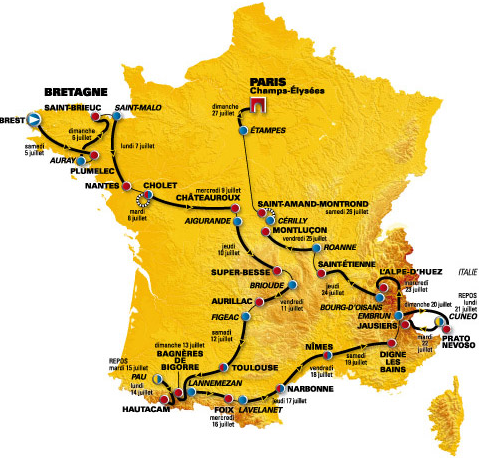 I don’t race (unless I’m trying to beat that old guy) and I don’t really follow the world of pro bicycle racing. But for the past several years, I have made it a point to get in front of the television to watch the greatest spectacle in cycling — the Tour de France.

For me, what makes the Tour so special is the countryside of France. The aerial shots of the course and the ancient landmarks along it are stunning. My wife often shushes me if she is around and I start exclaiming over this castle or that picturesque village. I can’t help it. Sports played in stadiums don’t have the same je ne sais quoi as the Tour.

However, this is the first Tour I’ve watched since becoming what I consider to be a “serious” cyclist. So I’m watching the riders more closely than I might have in the past. These guys are unbelievable. To watch the bursts of speed they put on at the end of a stage — I can’t imagine what that must be like. And to ride three weeks of 100-mile days, mon Dieu! And let’s hope the effort to crack down on doping this year is successful.

I have taken note of the scandal surrounding the exclusion of team Astana from the Tour this year. They got a raw deal and the Tour is the poorer for their absence. But I’m also interested in the presence of two American-based teams, Columbia and Garmin Chipotle. Columbia seems to be poised to do something special. As Team Highroad, they racked up a number of wins. Garmin Chipotle got more publicity when they formed last year, especially after the Astana debacle, but I don’t have the sense that they have the potential as Columbia. As Dennis Miller used to say, that’s just my opinion — I could be wrong.

Anyway, I’ll be watching TV every day for the next three weeks, much to my wife’s chagrin. I might even spend some of my online time reading up on the background of this year’s Tour — the teams, the favorites, the strategy. They are, after all, the crème de la crème of the cycling world.