I’m sure we’ve all had the experience of hands going numb on a ride. For some of us, it thankfully doesn’t happen much. For others, it occurs regularly. We keep going, and shake out our hands to get some feeling back into them. We can also check to make sure our hands are positioned to minimize pressure, by putting most of the weight on the heels, rather than the palms of the hands.

Or, we move our hands around on the bar. The nice thing about drop bars is that the rider can ride in a number of hand positions. I spend 80 percent or more of my time on the brake hoods, as I suspect most road riders do. I like to ride in the drops, not so much because I go faster that way, but because it’s a different position, and relieves pressure on the hands from their time on the hoods. And sometimes, I’ll grab the bar on the flat top part, especially going up hill.

But I’ve got another hand position that has become my favorite. I simply move my hands back from the brake hoods by an inch or two. That puts them over the bar just after it has curved forward from the flat part. 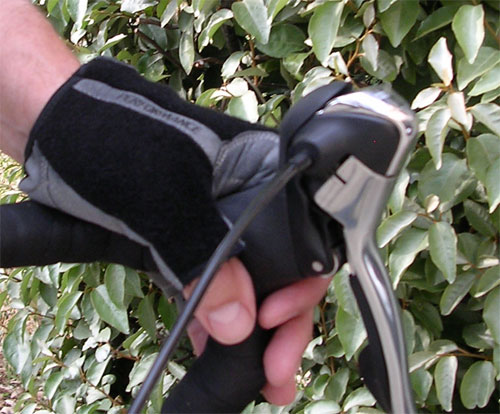 This position appeals to me because of one overriding factor: comfort. My hand is still able to grip in a handshake attitude. I can wrap my fingertips around the drops. It’s a lot like the hand position we used to take when riding those cruiser bikes we grew up with, where the handlebars curved toward the rear. 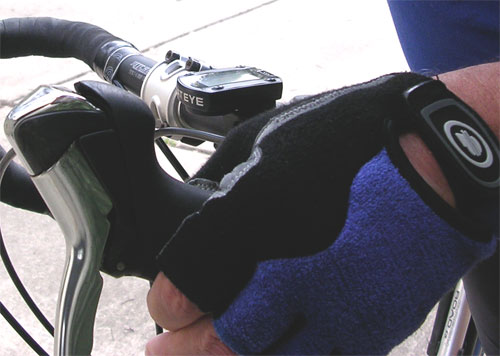 It also puts me more upright. That’s very welcome after being in the same bent-over position for awhile. I can relax a bit, sit back and look around.

Some handlebars are better adapted to this riding position than others. Randonneur-style bars, such as the Nitto Noodle, have relatively long “ramps” up to the brake hoods that give the rider a generous area to place the hands. 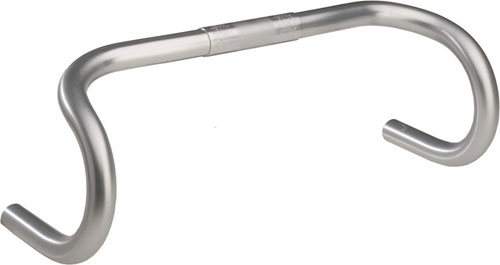 For myself, I’ve found that making sure the “flats” or “ramps” that lead to the brake hoods are parallel with the ground means my hands on the flats will be a little more comfortable. 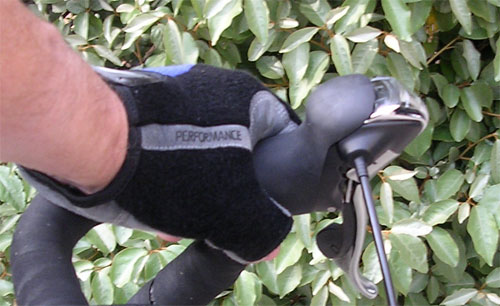 I’m still on the brake hoods 80 percent of the time, but when I need a break, I just back off an inch or two. If you haven’t tried it yet, it’s worth a shot. See if you agree.

A friend was complaining to me last week about soreness on his bottom after long bike rides. Yep, saddle trouble again.

It’s happened to him before. He’s gotten saddle sores that have kept him from the weekend ride. He’s felt an ache that feels like bruising in the soft tissue area.

I’ve been there, and my problems seem to have been solved by the right saddle.

He took a different route.  He got a saddle pad for his bike.

It cost him less than $20, and added an extra layer of padding to the saddle. He’s ridden it a few times, all on distances of less than 20 miles. But he’s happy with the results so far. For him, the extra cushioning works.

The saddle pad pictured above belongs to a guy in my club. He likes his for a different reason.

“And does this help?” I asked.

I’ve ridden with another guy on club rides who uses a saddle pad. He took some good-natured ribbing about it, but said it suits him.

Clearly, for some people, under some circumstances, a saddle pad might be the solution.

What are the disadvantages, then?

The first would seem to be the fit. Most of the saddle pads I’ve seen are held in place by a drawstring set into an elastic hem. Some online reviews I’ve read for various saddle pads say it’s hard to get them to stay put once they’re on the saddle, and that can lead to discomfort.

The second is harder to pin down. Pads add another layer between you and the seat, but do they really add comfort? And do they work on long rides? Or, are they favored by exercisers on stationary bikes rather than road or mountain bikers?

Do you have any experience with these? Would a cyclist benefit from them, or would they be better off following the advice of one online reviewer — “It is better to get a comfortable saddle and forget the pad.”