I put in considerably fewer miles in January than in the last few months of 2010, mainly because the weather was so uncooperative.  But even so, I did come to one major conclusion about my bike:

I have to change cranks again.

Regular readers might remember that my bike fitting in April showed that I needed shorter crank arms.  The ones I had were 175 mm, and the fitter recommended 172.5.  I was able to change over much sooner than I thought, because guest poster Don Blount had an older crankset that he had upgraded, and was nice enough to send it my way.  The difference 2.5 mm made in the pedal stroke was noticeable, and an improvement.

But then came New Year’s Day.  The left crank arm fell off during a ride.

I prepared myself after that.  I put an 8 mm Allen wrench into my seat bag, ready to tighten the pedal bolt if I ever needed to.  Unfortunately, just a few days later, I needed to.  I stopped during a ride just to check it, and sure enough, the same left crank arm jiggled a little.

I mentioned the problem to a bike mechanic, and he told me the crankset was shot, and needed to be replaced.  I didn’t really want to, and figured I could just tighten it as needed.

But I’ve needed to tighten it more often than I thought.  And it’s very unpredictable, too.  On a recent 30-mile ride, the bolt stayed tight, even after I’d traveled some grungy roads.  But on an easy Veloway ride of half that distance a few days later, I had to stop on the second lap to tighten it down.

So, I’m retrofitting.  I still have the original equipment crankset and bottom bracket, and I’ll just swap out one for the other.  That means I’ll be going back to 175 mm crank arms.  Well, I lived with them for more than two years, and they performed fine – just maybe not as optimally as shorter arms.  For the casual kind of riding I mostly do these days, I don’t think it will be a bad thing.  Except maybe, I’ll just have to be more careful about lifting the inside pedal on tight turns.

I am really enjoying my new bike. At the same time I am not missing my old bike. That’s because my new bike is my old bike but improved. I did the next best thing to getting a new bike, I upgraded components on my old bike. 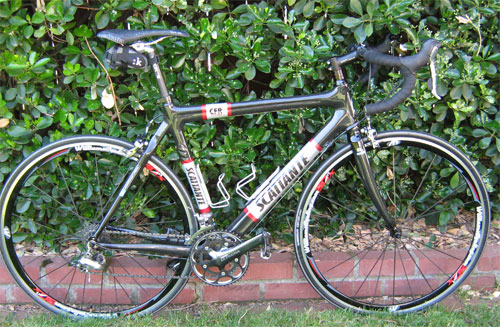 After about 18 months of riding I just wanted my bike, a Scattante CFR Comp, to perform better.

I don’t know if I could say that I outperformed the bike but it seemed that I was putting too much work into keeping the bike moving (if that makes sense) and wanting it to be more comfortable as the saddle began to become unbearingly uncomfortable. Also riding in the hills, which are not forgiving, and a difficult metric century I have targeted for late June motivated me to want to have the bike running at its optimum.

This evaluation came on the heels of replacing a chain and cassette, which is not included in the cost below since that was routine maintenance. Once I started with the saddle, everything else followed.

The bike has a carbon frame and seatpost and a combination Shimano Ultegra and 105 drivetrain. Those parts along with the cable covers, stem and brake levers are the only original parts remaining.

I did a lot of comparison shopping, buying everything online and on sale from various retailers.

Here is a list of the original part, the new part and the cost in order of replacement, including tax and shipping:

I spent a few hundred dollars less on the upgrades than I spent on the bike brand new. Why not just get a new bike? Because I didn’t want to spend three or four times this amount. The wheelset was the big ticket item but also had the biggest impact in terms of performance. I would advise anyone considering upgrading parts on their bike to do that first.

Some of Don’s upgrades. Click on each picture for a larger view.

I learned a lot by this as well. For example, despite a professional bike fitting, I was never comfortable riding in the drops. I learned that my handlebars were too long and the drops too deep. The new ones are not as long, the drop shallower and a much better fit for me.

All the new parts are lighter and so is the bike by a pound or two. Overall, it is a better ride.