I’m now able to irritate a lot of my friends because I use Strava. The record-keeping is useful, and the segments — while they do prompt one to speed up when one might not want to — provide a nice progress report on one’s ability over certain parts of rides. But there’s one thing I’ve noticed: My speeds according to Strava are different from the speeds registered by my bike computer. 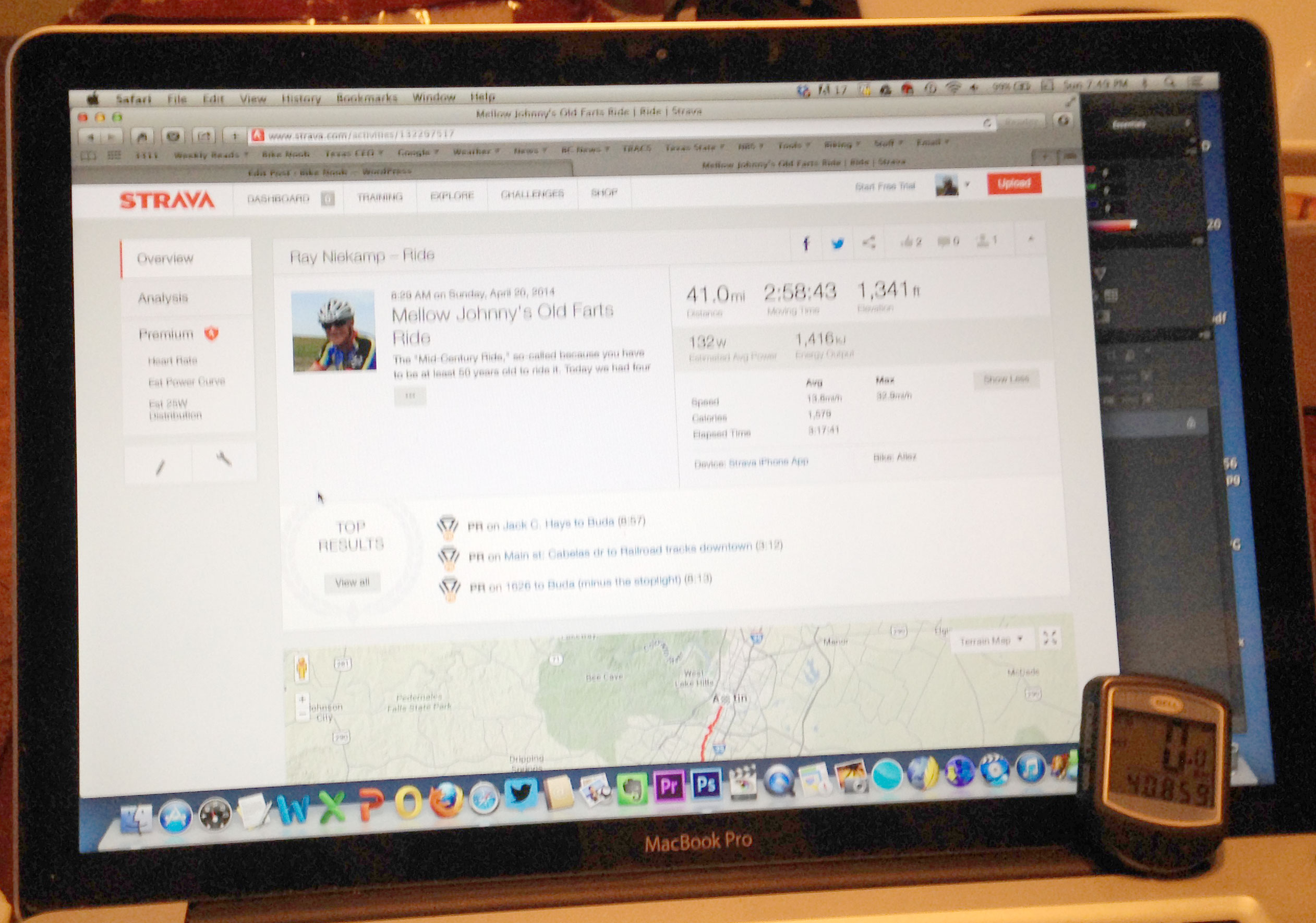 Now, I know I have el cheapo computer. However, I’ve been pretty satisfied with it. I measured the circumference of the front wheel by hand, and found that I need to enter 19 more millimeters than the 2096 commonly used for 23mm tires. My tires are 25mm, so 2115 mm is less than the suggested measurement for that size. Anyhow, when I compare my readouts to known distances on some of my more frequent rides, they are accurate to a level I find acceptable.

So I was puzzled when I noticed a difference between the stats in Strava and the stats on el cheapo. After the first couple of rides with both, Strava settled in and registered total distances for rides within one-tenth of a mile of my old computer. Even this morning, when I did a longer ride, the two were only four-tenths apart, and that was because I neglected to start my old computer at the beginning of the ride. I lost the data for about four blocks of riding.

But on Friday’s ride, there was a real disconnect. The problem area is maximum speed. For one downhill leg I do, the old computer clocked 31.9 mph. Strava had me at 36.4! That’s too much of a difference. Wonder what causes it? I also know from experience that the old computer’s speed was more likely to be the accurate of the two. I’ve ridden this stretch once or twice a week for the last several years, and I know what to expect. I also know what 36 mph feels like on my bike, and I didn’t have that feeling this time.

Therefore, while Strava is fun and useful, I have learned to be skeptical of it sometimes. I’ll continue to enter my ride stats on my spreadsheet (Yes, I know) according to my computer, and use Strava to gauge improvement.

The other day, I was out for a ride when I noticed something odd. My bike computer was behaving very oddly. It registered speeds twice as fast as I was going, then suddenly dropped to half the speed. After I’d ridden about four miles, it showed that I had done closer to nine.

Now, when you’re as OCD as I am about keeping stats, that’s a very uncomfortable feeling. I could still enter the mileage, because my route was one I ride all the time, so I know how far it is. I missed such important stats as average speed, maximum speed, and time of ride.

After traveling about half the route, I pulled over to the curb and adjusted my speed sensor on the bike’s fork. I made sure it was within two mm of the magnet, and I turned the magnet a bit to make sure it was positioned perfectly. Then I hopped on the bike and started pedaling.

Nothing. That is, nothing had changed. It still had me racing beyond my ability one moment, and in the next, wasn’t registering speed at all.

Back home, I reasoned that my headlight could be the culprit. I had installed the headlight just before the ride, because the sun is low in the sky and casts long shadows these days. A headlight on low beam would let me better be seen by drivers, especially if the sun is in their faces.

But I remembered that last winter when I had the light on the bike, the computer ran just fine. Hm. That couldn’t be it, then.

Just for the heck of it, when I rode the next day, I took the headlight off.

“Magnetic anomaly!” said one of my biking friends.

That was it, all right. And I recalled that one thing had changed since last year. I have a new computer. The old was was wired. The new one is wireless. The wired computer wasn’t affected by the magnetic field thrown off by the headlight, but it sure plays havoc with a wireless unit.

I guess I’ll just have to make it a point to ride before dusk for the rest of winter.

After my crash during the week, I was anxious to get back on the bike. The road rash was painful (at this writing, still is), but would rub against nothing while in the saddle, so riding wouldn’t be a problem.

But I needed to replace my trusty old Schwinn bike computer. It had been flattened when a car ran over it right after my crash. I swung by Wal-Mart after work Friday and picked up a new one. 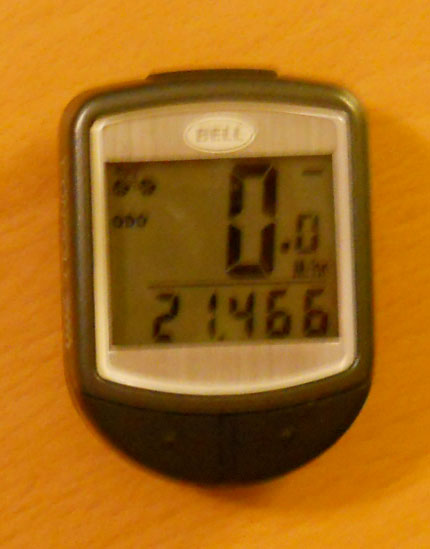 Not exactly like the old, but pretty close. Instead of the Schwinn name, it was by Bell — the helmet and cheap bike accessory folks. It has the familiar two buttons below the display that the previous one had had, and operates the same way. More bells and whistles, though — this one also has you input your age and weight, so it can calculate calories and fat burned during a workout. Oooh! Who needs Strava?

So, I sat down with the instruction booklet Friday evening and set the computer. I inputted the wheel circumference (after manually measuring it in my driveway), and all the other stuff you’re supposed to do. Saturday morning, I mounted it on the bike for its first ride.

Immediately, I saw that something was wrong. As I pulled out of my driveway, still with only one foot clipped into a pedal, the computer was reading 15 mph. Farther down the block, once I started cruising, it showed a speed in the high 20s.

Hm. I must have set something wrong. I did my ride along a familiar route, so I would be able to save some of the data. But the readings I was getting on the new computer were around twice as high as I should get if it was accurate.

Sunday morning, after resetting the computer for the umpteenth time, I set out on another ride. I had decided to skip the club ride because of my road rash. Although I could ride easy, I didn’t think I was up for a 40-mile, two-and-a-half hour jaunt in the country. Next week.

Again, the computer registered high numbers. I stopped a few blocks into the ride, and adjusted the sensor mounted on the fork. Then I reset the computer to kilometers per hour, assuming that maybe there was a manufacturing flaw, and the miles and kilometer settings had been reversed at the factory. All that got me was cruising speeds upwards of 60 kph.

This disappointed me. I’ve been somewhat smug about not needing a fancy bike computer when all my friends have one. Current speed, max speed, average speed, and distance are really the only numbers I need. But now, after spending considerably more for this unit than the one it replaced ($23), I wasn’t getting any usable readings.

As I pedaled along, I noticed something odd from the front wheel. That sensor magnet was really spinning fast. Why, it looked like it was going twice as fast…oh, crap.

I stopped at the side of the road again, and this time I took off one of the two magnets on the front wheel. When I disconnected the old unit’s wiring and sensor, I had forgotten to take the magnet off the wheel. Instead, I installed the magnet from the new unit. Now, I had two. Double the magnets, double the fun.

I set off again. The speed was right where it should have been — between 12-15 mph. On the slight downhill through a nice subdivision, it registered 26 mph. I rode over to the Veloway, which has a known distance of 3.1 miles per lap, and did two laps. Yep, 3.1 miles each time.

Next time you get a new bike computer, remember to take off the old wheel magnet before you install the new one.

And you wonder why I still call this blog Bike Noob.