Back in my junior high school and high school years, I used to listen to broadcasts from around the world on shortwave radio. One of the statistics I kept was a record of how many foreign countries I had received.

Shortwave radio is now passé, since most of the international broadcasters stream their programs over the Internet. But I find I’m collecting countries again, among folks who find this blog and spend a little time here.

I was astounded a few months ago when Bike Noob drew its first comment from overseas, from Brazil (Olá, Renato!). That was followed by other commenters from Germany and Singapore.

Site Meter, which I use to track visitors to the blog, uses little flag icons to show where visitors come from. I get a kick out of seeing flags of countries that haven’t been here before. 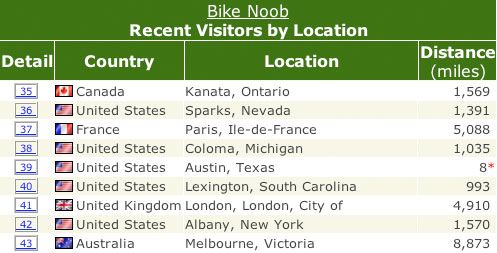 For each numbered link in “detail,” Site Meter tells you the name of the ISP, the operating system and browser, and what pages within the blog visitors started and ended their visit.

And, for every 100 visits to the blog, Site Meter displays a pie chart showing what percentage of those visitors come from given countries: 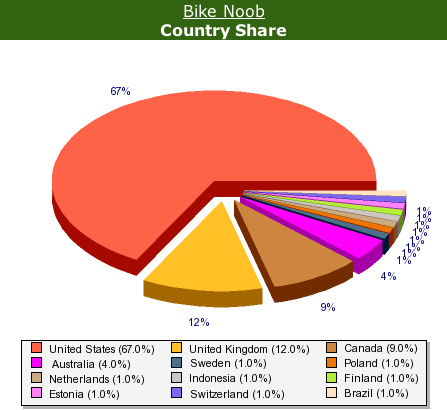 This example is a bit unusual, in that U.S. visitors tend to account for 75-85 percent of Bike Noob’s page views. Australia, the U.K. and Canada often alternate in second place. In the above example, those countries’ numbers are a little higher than average, which is usually closer to six percent each.

As of today, I have had visitors from 46 different countries around the world. While I treasure every overseas visitor, I delight in getting page views from “exotic” locales, such as the U.A.E., Estonia, Romania, Bulgaria, Thailand, and Malaysia. I hope you are able to understand my idiomatic English.

I have spoken before of blogs as being part of an online “conversation,” and I believe that my experiences here bear that out. Individuals from any part of the globe can get along. It’s their governments that make things difficult. Let’s keep the conversation going. Ride, post, comment, repeat.