I’m not a very political kind of guy. I tend to live and let live. I do think that bikes should get more deference from politicos, though, and I’d like to see local cities and towns take measures to make biking a more realistic transportation alternative for most people.

For most people, that would mean making the streets safer for bikers. Let’s face it, most folks haven’t taken classes in biking, like the Road I class offered by the League of American Bicyclists. I had the good fortune to take both the classroom and road parts of Road I last spring, and it did me some good.

One group of cyclists is trying to be more in-your-face about using the road. It’s Critical Mass, which has popped up in major cities around the country. And now, it’s even in not-so-large cities. San Marcos, Texas, where I work, has about 40-thousand residents, but because the university is a good-sized one, it now has its own Critical Mass ride. I got caught behind it on my way out of town this evening. 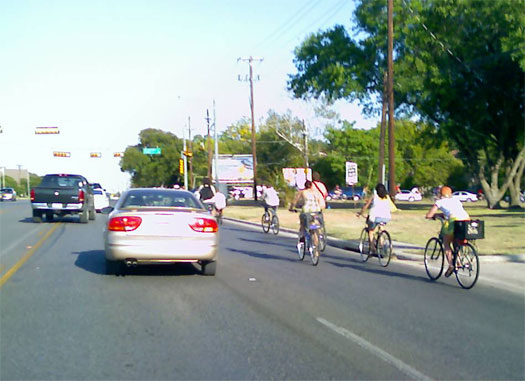 This cell phone shot doesn’t do justice to the size of the group. I estimate there were about 50. If you look closely, you can see that some have already made the right turn at the light.

The cyclists decided to take the main road leading from campus to the Interstate highway. They took up the entire right lane, which forced traffic to use the left lane. At 5:15 p.m., that can really back up the cars, and we waited longer than usual to get out to the Interstate.

In their favor, I must admit that they impressed me. There was none of the raucous conduct we’ve read about on other Critical Mass rides. These folks did a good job of keeping to their lane. They filled it from edge to edge, and with about 50 riders in the group, they were not a compact mass. However, by the time they reached their turn point, they had spread out, and were not as bunched in the lane as they had been. They seemed to be mostly university students. Although some older road bikes were present, I did not see one pair of padded shorts or a polyester cycling jersey. Clothing was rock concert casual.

Some motorists are always going to be upset by the presence of bikes, and some this evening were impatient to get past the riders. I’ll bet we’ll read something about it in the local paper over the next couple of days. But if nothing else, it showed the city that bikers are among ’em, and must be taken seriously.