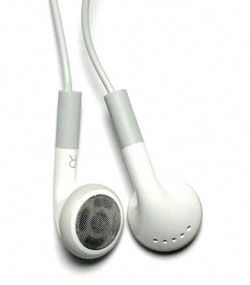 Every organized ride has them — warnings that riders are not allowed to wear headphones during the ride.  The rationale can’t be faulted — if your ears are full of blaring music, you might not hear cars coming up behind you, and could get into an unsafe situation.

But there’s a different take on that issue.  My friend Jared claims that earbuds make you more aware of your surroundings.  They cut the wind noise, and actually make it easier to hear other vehicles.

I’ve had an iPod for a couple of years, but never listened to it on a ride.  I took to heart those warnings about safety.  But this evening, I decided to bring the iPod along and test Jared’s idea.

I mixed up my riding.  Some of it was on the shoulder of a four lane divided highway, where cars and trucks routinely go 65 mph or faster.  Then, I turned onto suburban neighborhood streets with very little traffic.  I took a few laps on the Veloway, where the only other traffic was bikers and rollerbladers.  Finally, I rode an arterial street through the neighborhood — one with heavy traffic during the evening rush hour, but with much lower speeds than the highway.

Earbuds cut the wind noise? The prevailing wind in Central Texas is from the southeast, as it was today. And when you’re pedaling into the wind, the earbuds do nothing to cut wind noise.  If anything, the airflow swirls around the earpieces and amplifies the wind noise.

But when you’re riding with the wind, or even across it, the earbuds do seem to have that magical effect.  The music certainly comes through more clearly.

Earbuds make it easier to hear approaching vehicles? Well, yes and no. I had no trouble hearing cars and trucks coming up behind me on the highway. What I couldn’t figure out was whether I was hearing them later than I would if I rode without the earbuds. On the Veloway, I did not hear other bikers come up to pass me until they were right next to me.

One other earbud effect I noticed: I didn’t feel as connected to my bike as I am on a typical ride. The earbuds blocked out the little noises that the bike makes — the noises that remind you to feather the front derailleur, or to take a look at the bottom bracket, because it might need cleaning and maybe lubing.

Does riding with only one earbud in make a difference? You bet. You can’t hear the music as well. And if it’s a song with distinctive stereo separation, that means you’re not getting the sensory experience of the song. Doesn’t matter if it’s quieter stuff like Diana Krall’s “Let’s Fall In Love” and Frank Sinatra’s “I’ve Got You Under My Skin,” (Man, am I dating myself!) or raucous stuff like Little Richard’s “Lucille” or LouAnn Barton’s “Tee-Ni-Nee-Ni-Nu.”  I’ve gotta have both earbuds in, or it’s not worth it for me. Oh, was I supposed to talk about whether the one bud makes it easier to hear traffic? I didn’t notice a difference.

As far as the safety concerns, In My Humble Opinion, they are overblown. I heard surrounding sounds quite well. The earbuds did not block out those noises.

Will I ride with earbuds again? Probably. But it’s not something I’ll do on a regular basis. I’ve never felt it necessary to add to the sensory enjoyment of biking when I can take in the sights and sounds all around me. For me, it’s the biking experience that counts.