Got out for a nice 15-mile ride today — first time I’ve been on the bike in a week.  Felt great.  In fact, I think the ride was just what I needed to chase the last vestiges of my cold away.

Man, you can sure tell when you’ve been off the bike for several days.  I didn’t really feel like my old self until I had put down about eight miles.  But then, the legs seemed to loosen up and everything was all right.  I even chased down a rider some distance ahead of me, caught him and smoked him!  Nice to be the smoker for a change.  (Once again, he had no idea we were in a race.  But he was wearing a cycling jersey and shorts, and rode a pretty nice Specialized Roubaix.)

Today I wore the gloves that have been relegated to back-up status for the past few weeks.  They’d been showing signs of wear, so I got new gloves to wear on the century.  In fact, the new gloves were the ones I was wearing when I fell, and they did a great job of protecting my hands from the pavement.

Today’s ride reminded me why the previous pair is just used for back-up.  They’ve really deteriorated.  I bought them when I bought the bike, back in February — so that means I’ve had them for eight months.  And they’re shot. 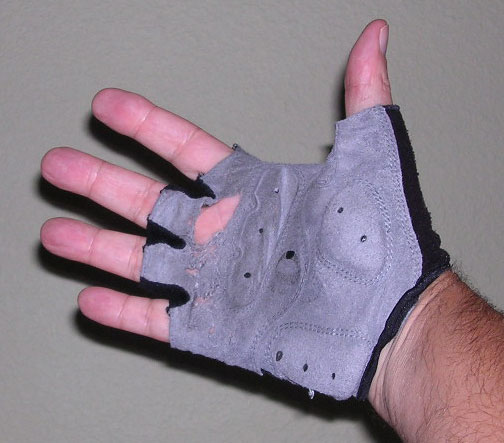 The left one is in about the same condition.

Now, these are Pearl Izumi gloves.  I think PI makes good quality stuff, and I own a number of different items of theirs.  But eight months?  I’d a thunk these would last longer.  As I said, they’re still  good enoughfor back-up, or for short rides like today’s, but probably won’t be for much longer. Their replacements are also by Pearl Izumi, but a higher-priced model, with thicker padding, especially around the heel of the hand.

I wash my gloves about every two weeks, maybe more often in the summer when my hands get so sweaty they soak right through the synthetic leather palm .  I wonder if the washings contribute to their shorter life span?

What’s your experience with glove wear?