I did something today I haven’t done in awhile — I joined up with the neighborhood club for its Sunday morning ride. The club is the Circle C Ranch Cycling Club, or CCRCC. It’s named for the neighborhood in southwest Austin where we live.

I was interested in doing the ride because it’s one I rode many months ago, and really enjoyed it. It gets out into the hill country west of Austin quickly, and features lots of rolling hills. I have also realized that I have to do more hill work if I want to complete that century in the fall.

We started off in a group of about 17 or 18, and stayed in a pack for about six miles. Once we crossed U.S. 290, though, the pack started to split up into two groups. I was on the back of the second group. Soon, I was watching the second group disappear out of sight around a bend.

We got to the main objective of the ride — Fitzhugh Road. Now, the last time I was on this route, the group stopped at the convenience store at the corner for a quick rest break. Today, no rest break. Well, it was only 10 miles out from the start. One club jersey was just reaching a bend about 500 yards ahead of me.

I followed, but couldn’t catch them. I am pretty much a 15 mph average rider, and these guys (and several women) are faster. Plus, the rollers. Oy!

One of the nice things about the Fitzhugh route is that you can pick your own distance. It’s an out-and-back route, so you can turn around wherever you like. Most people pick a cross road. The first major intersection is Ranch Road 12. I figured they would take a break there, and that’s how I would catch up. At the same time, the rolling hills were really taking it out of me. I planned to tell the ride organizer that I was turning around there.

When I approached the intersection, I could see a group of about seven of them stopped beyond it. Ah ha! I had caught them. But before I reached the corner, they shoved off. I pedaled hard, and latched onto the back of the group. It took awhile to get to the ride organizer at the front, to tell him I was turning back.

By now, the morning sun was out in full force, and the temperature was around 90°F (32°C). The breeze wasn’t bad though, and I was wearing a full zip jersey, so I could zip down and take advantage of the breeze. When I reached the convenience store back at the 290-Fitzhugh corner, I got a bottle of sports drink, stood in the shade of a tree, and finished it off. The rest of the ride was uneventful, and I got home in time to watch the end of the British Open.

I’m a little bummed that I’m not on a par with the club riders, but there are also rides for slower guys like me, so maybe there will be more club rides in my future.

Totals: 36 miles, 14.3 mph average (That’s .7 mph faster than the last time I did the ride, in January. I’m not in their league, but improvement continues).

I’ve been hearing this advice ever since I got back on the bike — but it never really made much sense, even after I got my first set of clipless pedals.

But on one of my weekend rides, it all came together.

I rode a route with long hills, and tried to make more of an effort to attack them than I usually do. As part of that, I pulled up on the pedals rather than pushing down. No, I’m not a complete idiot — I’ve been pulling up on the pedals since I went clipless, but in a jerky manner. This time though, everything seemed smoother. Suddenly, it occurred to me: “This is what they mean by pedaling in a circle.”

I could feel the pedals move in a circular motion, with constant pressure throughout the entire revolution. I could feel the bike surge forward a bit. The cyclocomputer had the speed rocket up from 5.6 mph to 6.2, to 6.8, to 7-point-something. I could feel my thighs burn.

On the way back, there is one longish hill that has been my nemesis since my first time on this route. I’ve always been able to pedal all the way to the top, but it’s been a struggle — pushing down hard in 34 x 28 — the lowest gear combination I have.

This day, I started two gears higher, and made an effort to pedal in a circle. I could feel the difference. I eventually had to shift down to 34 x 28, but maintained cadence as well as I could. I got to the top of the hill in better time than I have yet, and less winded.

Pedaling in a circle. A simple concept, and once I got it figured out, one that really helps.

The Real Ale Ride in Blanco, Texas, could have been a great ride. All the elements were there. A beautiful day (OK, hot); nice Texas Hill Country scenery; a start and finish at a microbrewery (Real Ale) with beer and barbecue at the end.

We got off to a good start. We met Jared from Just Another Nerd… and his friends Eric and Christine. They all planned to do the 50, too. 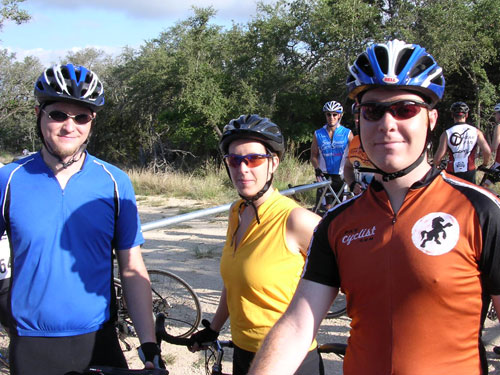 It didn’t take long for the hills to kick in. I think some bikers were caught by surprise at the extent of the hills, and their steepness. I was huffing and puffing just a few miles into the ride. This ride is organized by a local bike shop, and attracts a higher caliber of rider from both the Austin and San Antonio areas than most typical charity rides. The first rest stop is about 13 miles from the start. Typical remark while in line for the food and drink: “I was gonna do the 50, but I think I’m cutting it to 30 today.” 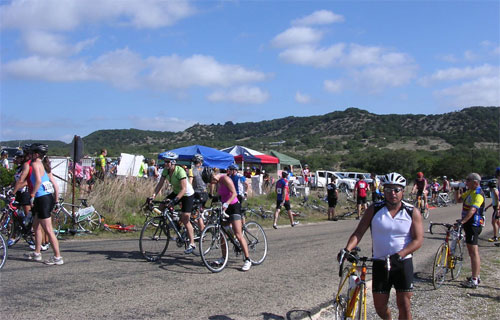 Rest Stop #1. We didn’t go over the hills in the background, but we did go through gaps to get past them. That involved climbing enough. 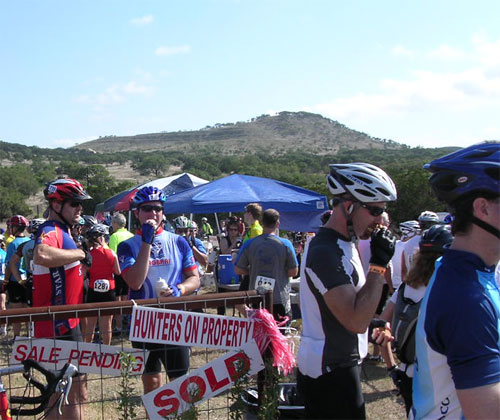 Hunting for bananas, and pickle juice, and…

Jared and friends decided to skip this stop, so I watched them head down the road. Since my bonk earlier this year, I am sensitive to keeping fueled while on a ride. Besides, it’s not a race, anyway. When I did get going, I made decent time to the second rest stop, and had caught up to them. Heading out from here, we picked up a ranch road with light traffic, and made better time. 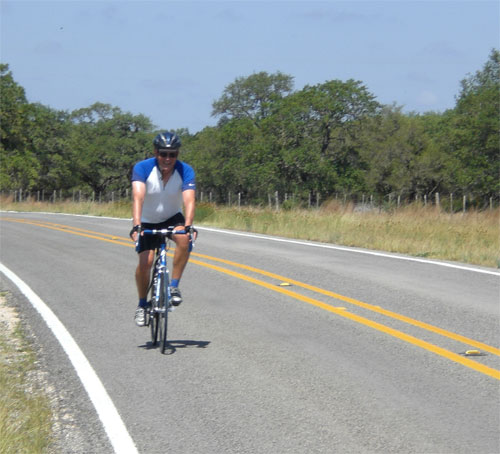 The ride goes through cattle country, and riders had to cross cattle guards at several points along the route. The signs warning of the cattle guards seem to carry a double meaning: 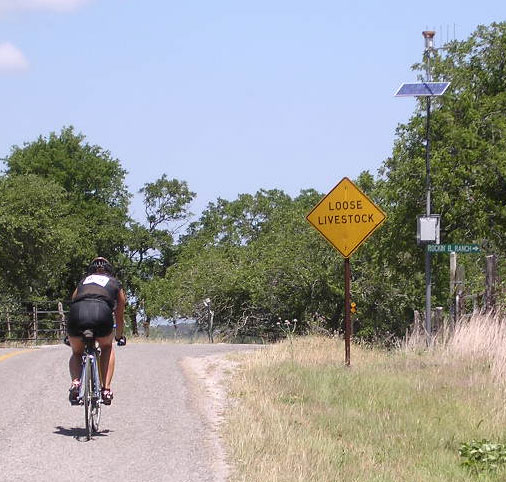 Someone needs to rein in their morals.

The ranch road brought us back to the first rest stop again. I plopped into a chair under an awning, drank my liquids and ate some food. The temperature was into the 90s by now, and some of the starch was coming out of me. The road out from the rest stop climbed through the passes over the hills in the earlier picture. I was in the largest cog of my compact double, and kicking myself for not getting the triple when I bought the bike. Then, I hit a hill I could not pedal up. That didn’t bother me — lots of others walked their bikes up it, too. 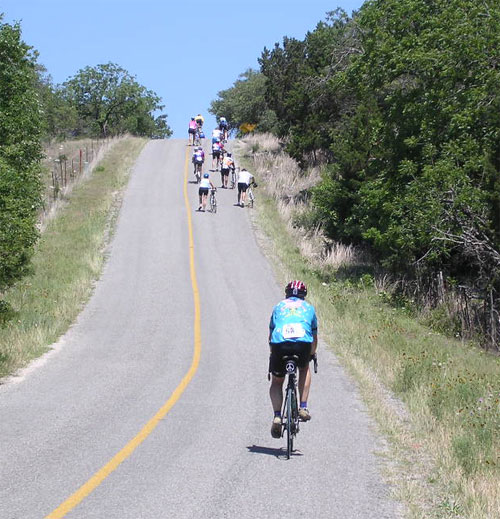 Will this guy make it, or will he have to walk his bike, too?

The beauty of a struggle up a hill like this one is that once you’re at the top, it’s downhill. Man, was it ever. At one point, the road dropped away out of sight. Once you hit the dropoff, your speed soared. I was going more than 35 mph, and could easily have hit 45, but some of the curves in the road made me uneasy. I feathered the brakes to keep from gaining too much speed, and kept it around 35. BANG! The rear tire let go like a shotgun blast. I kept the bike steady, and stopped to assess the damage.

Shredded rear tire. I’m guessing the heat buildup from the braking (no, I didn’t keep the brakes applied constantly — used mostly the front and hit the rear intermittently) caused the tire to blow. After a half hour, a sag wagon found me and drove me back to the start. I finished about 38 miles.

Pat was already there, having completed her 30-miler. She was fried. She pushed her very upright, heavy steel hybrid through those same hills, but when she got to the main intersection in downtown Blanco (pop. 1500) and realized she faced one more two-mile climb to the finish, it was almost more than she could take.

We didn’t even bother to stand in line for the beer and barbecue, but headed for home right away. Pat is now talking more seriously about a new, lighter, road-friendly bike, and I’m once again making a resolution to work hills into my weekly rides more than I do now. Upcoming rides? Talk to me after today recedes into my dim memory.

For another take on the ride, see comments left by Daren of the LMRA Bicycle Club of Ft. Worth on his club’s message board.