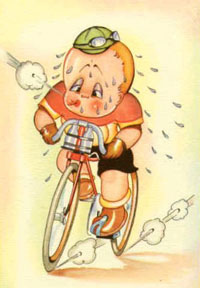 Texas — and much of the rest of country, from what I’ve been seeing online – is going through a patch of very humid weather. I really felt its effects on last weekend’s club ride. I was drenched in sweat and had trouble keeping up my pace. Others had it even worse. Our ride leader blamed himself for not drinking enough, and was hit with cramps in both legs that nearly knocked him off the bike.

Most people I talk to about the humidity complain more about being uncomfortable than anything else. One Bike Noob reader wondered if it’s even possible to beat humidity.

The problem with high humidity is that it inhibits the body’s ability to cool itself. That’s because the saturated air doesn’t allow water to evaporate. You sweat more, but it just stays on your skin. You’re still losing water and salt, so dehydration becomes a greater risk. Therefore, a lot of the advice about dealing with humid weather is much the same as advice about dealing with hot weather. Mainly: stay hydrated.

Cycling coach Diane Stibbard reminds you to drink before the ride, even starting the night before. Take 16 ounces of liquid before you go to bed. Drink another 16-24 ounces in the morning before you head out. You might want to include some kind of electrolyte in this pre-ride drink.

During the ride, you should be drinking every 15-20 minutes.  Your water bottles probably hold 12-16 ounces, and Stibbard says you should try to drink 16-24 ounces the first hour of the ride. That would empty both bottles in the first hour.

After the first hour, add sports drink. Some folks say it might even be a good idea to add a pinch of salt to your sports drink. For one thing, it would eliminate the sometimes cloyingly sweet taste. But maybe a salty snack might be even better. Pretzels have both carbs and salt. Salting your food the day before the ride might help, too.  But you should know whether your body can tolerate sodium.

Other ideas, in no particular order and of varying value – you decide:

Wear a helmet with lots of vents. I can feel the difference in my recently-acquired Bell Sweep helmet with its big vents, but on humid days, I sweat just as much as with the old helmet.

Wear a jersey with mesh inserts.

Fill your water bottles halfway the night before, and freeze them.

Use a Camelbak or similar hydration system instead of water bottles for its greater volume.

If the humidity is greater than 50 percent, take along an extra bottle. Stick it in one of your jersey pockets. 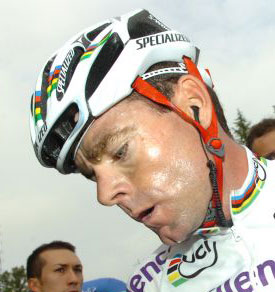 Go early in the morning. A friend and I hit the road by 7 a.m. for our Saturday ride. Caveat: mornings can be cooler, but also more humid, so you still might not evaporate sweat and might still have to deal with problems caused by dehydration.

After the ride, remember to continue replacing the fluids you lost. Coach Stibbard recommends another 16-24 ounces in the first hour.

So, you might not be able to  “beat” humidity. But if you take the right precautions, I think it’s possible to keep it from beating you.