I still think they were smart to cancel the Tour de Florence — too much uncertainty about Ike’s path.  But it turns out that Austin was completely spared.  Some rain bands from Ike did find their way to the Tour route, but not much.  However, the wind was pretty stiff, sometimes gusting into the 30s.  So I’m glad I didn’t ride.  Plus, it’s so humid around here today, I could barely do an hour’s worth of yard work.

It was the smart thing to do.  Although forecasts for Ike keep sending it a little farther east, we’ll still get lashing rains and winds of tropical storm force (>39 mph).  They plan to reschedule the Tour for October.  I might be able to use it as my long ride warmup before the century.

So, since I’ll be sitting indoors all day Saturday watching college football, I got in an 18-mile ride this afternoon.  The hurricane is already sending some pretty good wind in our direction, and riding into the north and northeast was a chore.

I had a nice chat with another rider who caught up to me.  He was riding an old bike from the ’70s or ’80s, a British Thunderbird, he said.  But he had taken it down to bare metal, repainted it and rebuilt it.  The paint job was eye-catching: blue top tube and down tube, fading into red for the head tube and seat tube.  He had replaced the down tube shifters with brifters, put on new wheels and better brakes.  It looked like a nice ride, and he could really shoot ahead if he put his mind to it.

Today’s ride was a treat I’d promised myself as a reward for getting my annual physical, which I did today.  Had a bit of a scare in the doctor’s office.  He was looking over the EKG printout, and said, “Don’t put your shirt on just yet — I don’t like the look of this EKG.”  Huh?  He examined it another minute, and said, “Oh.  I see what happened.  She [the physician’s assistant who did the EKG] mixed up the leads.  Where you’re supposed to spike up, it shows a spike down.”

I got hooked up to the machine again, he double checked the connections, and this time it turned out fine.  “With all that biking you’re doing now, your heart should be in better shape, not worse,” he said.  “That’s what got me concerned.”

“You’ll make it out the door, anyway,” he replied.

Other encouraging news: An uptick in my cholesterol in my semi-annual check in March may have been a machine error.  He’s trashed the gizmos that read blood drawn by a finger stick — the gizmos that give you your cholesterol figures immediately.  Turned out his machines, at least, were inaccurate by as much as 20 percent.  If the figures from today’s blood drawing are as expected, I’ll cut back my cholesterol medicine to once every other day.

The doc may also have pointed me in the direction of a solution for my numb toe problem.  I’ll have to update that in a future post.

Ike is supposed to barrel through Texas quickly.  We might be able to get out and ride as soon as Sunday.  If college football bores me, I can always clean my chain.

We might get the Tour de Florence in this Saturday.

It seems that every time a new storm track is projected for Hurricane Ike, it’s slated to hit the Texas coast farther east than before. The Austin area now seems to be out of the track altogether, altho we still stand to get plenty of rain this weekend.

However, that rain may not be as continuous as first thought. Accuweather has a prognostication for Florence, Texas that gives this pessimist reason for a little optimism: 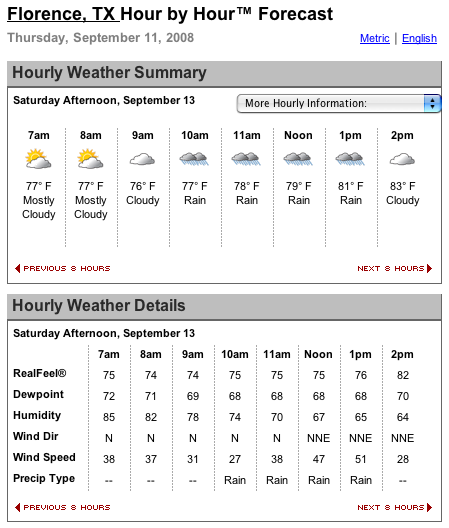 So the rain will be mainly between 10 a.m. – 2 p.m. It’s those strong north winds that will cause more trouble.

The reason for optimism is that an hour-by-hour forecast two full days in advance is nothing more than a guess. With the storm track shifting to the east, maybe the wind and rain will be less on Saturday than these numbers show.

The Tour’s web site has not been updated.  I e-mailed the ride director this afternoon, to see if the ride was still on, and got no response.  Which must mean that it is.