We complain a lot about bikes getting along with cars — or not. But what would your ideal cycling situation look like? Take a look at the city of Groningen, in the north of The Netherlands. It bills itself as “The World’s Cycling City,” and offers lots of food for thought as to how we might make some improvements in our biking infrastructure in the States. Take a look at this 15-minute film. Click the picture to play. 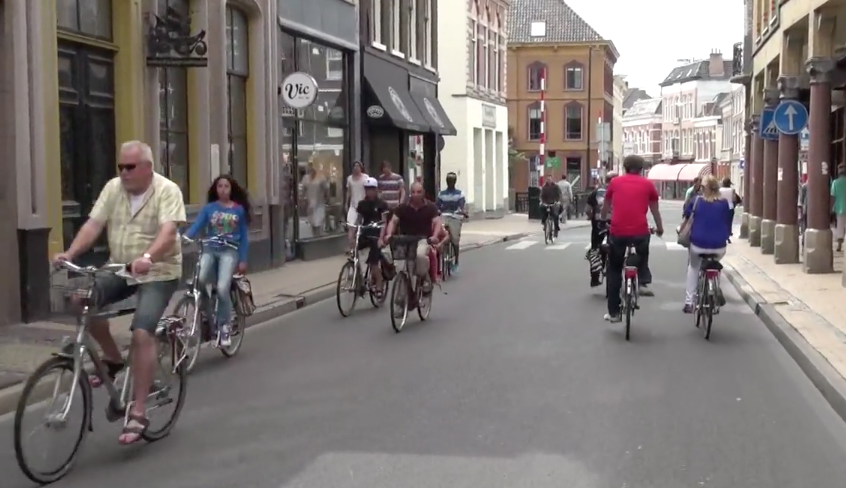 Have you ever been riding along on your bike, when a passing motorist yells something like, “You don’t pay taxes — get off the road!” or something to that effect? In my experience, those shouts are triggered because bikes slow down traffic, and adversely impact a commuter’s driving time. In my experience also, that slowdown lasts for approximately three seconds. Then, the car is free to pull out and roar past — often at a distance too close for comfort.

On the urban planning website Planetizen, blogger Todd Litman dissects the internal combustion crowd’s arguments against supporting better infrastructure for cyclists, including the one on taxes. It’s a thorough, thoughtful piece, and I look forward to more discussion on this subject.

Litman’s post, “Who Subsidizes Whom?” can be found here.

What is it that prompts people to ride bikes more in some cities, while in others, biking lags noticeably behind? Two academics did a report on the topic for the U.S. Dept. of Transportation, and it comes up with an answer that we’ve heard before.

By the way, the report is fully two years old, so I’m not trying to call your attention to new findings. But it’s likely most Bike Noob readers haven’t heard of or seen the report, so its results could be of interest.

The two researchers, John Pucher of Rutgers University and Ralph Buehler of Virginia Tech, aggregated cycling data from nine major North American cities over two decades, roughly 1990-2010. The cities in their study were Chicago, New York, Minneapolis, Montreal, Portland, San Francisco, Toronto, Vancouver, and Washington. Those were picked because they already had a strong biking culture. Other major cities such as Dallas, Houston, Kansas City, Detroit and Memphis were deliberately left out, because of their low rates of bicycle commuting and cycling facilities.

The rate of cycling was higher in these cities than in the rest of the U.S. or Canada, at least doubling over the two decades of the study. But the percentage of female riders was down, falling from 32 to 23 percent in the years between 2001-2009. The age group that showed the largest increase in the rate of cycling was the 40-64 year olds.

Bike commuting was up in those cities, by 64 percent in the U.S. The percentage of commuters who use bikes rose from 0.4 percent to 0.6 percent — a less impressive number.

Bike fatalities dropped in both the U.S. and Canada — by 66 percent up North, and 21 percent in the States. In fact, the researchers found the fatality rate in Canada to be a third of that in the U.S. Serious injuries also fell. Canada was down 40 percent, the U.S. 31 percent.

Perhaps the main finding of the study was that levels of bicycling positively correlate to the availability of bike lanes and/or bike paths. When cities have those amenities, cycling is three to four times higher than cities that do not. In surveys, cyclists indicated that they prefer segregated bike paths to bike lanes. Most cities have built both, and combining the two gives cyclists more flexibility in planning their trips. But cyclists were split on whether they prefer bike lanes or paths.

All nine cities in the study have been adding to their networks of bike lanes and bike paths. The study notes that bike lanes are growing at a faster rate than paths, by as much as ten times more in Chicago and New York, but even three times as fast in Washington and Minneapolis. “The increased focus on bike lanes,” write the authors, “might also reflect a shift toward promoting daily, utilitarian cycling, and away from the previous emphasis on recreational cycling.”

Cycle tracks, which are popular in Europe, are just starting to be built in North America. Cycle tracks are on-street bike paths separated from motor vehicle traffic by barriers. They’ve been built along some streets in New York, partly as a response to motorists who block bike lanes.

However, it’s the off-street bike paths that get the most use. Most of these are multi-use paths, and are mainly used for recreational cycling. Other bike amenities noted in the study are residential streets with traffic calming features (street narrowing, chicanes, speed humps) and bike boulevards, which give priority to bikes over cars.

The study is subtitled, “Lessons for New York,” and concludes that although New York has built the most bikeways in recent years, it has failed at integrating bicycling with public transit and bike parking.

The report concludes that while biking is enjoying growth, its growth is limited to the few dozen cities that have policies to promote cycling. In the U.S. South, from Texas to North Carolina, cycling rates are still extremely low. The cities that are undergoing a biking Renaissance offer great examples for other cities to follow.