At this morning’s ride, lots of club members were sporting our new kit. For several years, we’ve had a design that emphasized blue, yellow, and white — sometimes with blue dominating, sometimes with white the most prominent color.

But this year, the powers that be came up with a new design. It’s mainly white, with black and red trim. The “legacy” club logo remains in yellow. That bothered me, because I’ve never been a fan of yellow on white. But the finished kit looks pretty good.

I showed up at the ride wearing my 2010 jersey, with blue as the dominant color. You can see it in the picture at the top of any Bike Noob page.

And here’s my dilemma: While I enjoy being part of the club, and the social benefits that have accrued from it, I don’t feel compelled to buy the latest new set of club kit that comes out.

It seems a new design comes out almost every year. Some members have every iteration in their collection. I, however, am content with one version.

Why? I’ve just got too many jerseys, that’s why. Cycling jerseys hold together pretty well, and ones that I bought five years ago are still in regular rotation.

“How many jerseys do you own?” asked a fellow club member, when we met on a ride a few months ago.

“Seven, I think,” I said. Let’s see…there’s the 50-Plus, the MS 150, the club jersey, the Hotter ‘n Hell, the old yellow one, the Penn State one, the old white and blue one, the red long-sleeved one, the summer weight short-sleeved one…why do I need another jersey?

Or should I suck it up and show my loyalty and pride in the club and pop for one of the new ones?

The recent post about being visible got me thinking about jerseys in general. I think it’s time the Bike Noob got some new duds. The newest jersey I own is almost two years old. And most of my jerseys lack…je ne sais quoi… panache. 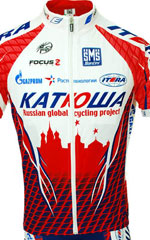 But what to get? There are always team kit jerseys. I could get one for a team that competed in the Tour de France. Katusha’s is colorful. But who would I be kidding? This is the guy who leads the club B rides, then always finishes off the back — behind the slow riders. For a rider of my caliber, wearing a team jersey would be presumptuous.

Or, I could go for a jersey touting an equipment company…even a bike brand. Heck, I ride a Specialized bike…what about a Specialized jersey? But on second thought, it would look too much like a racing jersey. And would Specialized appreciate the fact that a rider as slow as I am is carrying their colors? 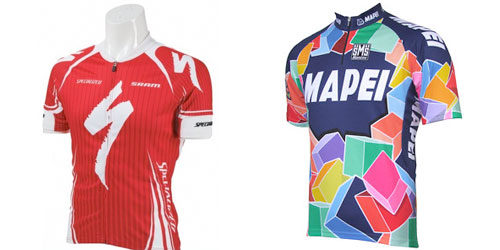 You can still find team kit from defunct teams. Some jerseys worn in past years are kinda cool. Some are really obscure. Many are really colorful. For example, I always liked the Mapei kit. It stands out, and not a lot of people would know what it was all about.

There seem to be lots of beer jerseys around. I drink beer. Therefore, should I wear a beer jersey? A lot of them are for obscure regional craft brewers, so they don’t appeal to me. A lot of them are overdone, in my opinion. But this Molson jersey might be a possibility. The jersey is not outrageous, Molson beer is distributed widely in the US,  but it’s not that popular — it could be a nice choice. 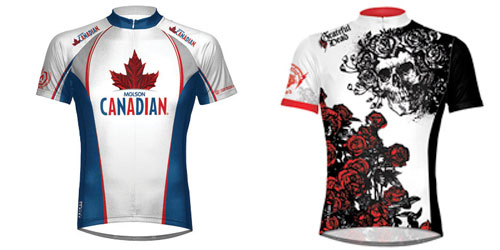 Jerseys that feature a main solid color, but have enough trim to add a little dash to the look. I found these on eBay. They’re new, not used, and based on recent auction prices I’ve seen for them, they’re inexpensive as jerseys go. In a few weeks, you might see the Noob sporting something along these lines — styled like bike jerseys, but not overwhelming.

What do you think? Am I too boring? Should I shoot for something entirely different? What kind of look do you like to project when you’re on the bike?

I’ve been riding along some pretty busy roads lately. Most of the time, they have shoulders. Sometimes, they don’t. And shoulders and bike lanes usually end at intersections. So being seen is something I’m always aware of.

It seems whenever I hear of a collision between a car and a bike, the driver often says something like, “I didn’t see you!” Now, that’s generally because the driver was not looking for a cyclist. They were looking for motorized traffic, so didn’t expect to see cyclists.

So I decided early on that I would try to wear clothing that is visible.

Different colors show up differently. Below is a shot from the start of a group ride I attended about a year and a half ago. (It’s kinda nice to see evidence of cooler weather — I’m sure it will be back, eventually!) 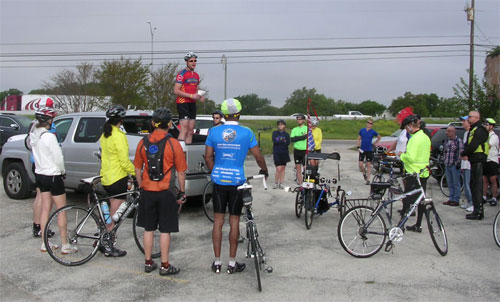 Anyway, some colors jump right out. Hi-vis green, for one. On this overcast day, the screaming color makes the cyclists wearing it stand out from the crowd. Another good choice is bright yellow, also obvious in the picture.

Less of a standout — white and black. Again, the overcast sky has an effect. White might work on a day like this, but not as well when the sun is low in the sky. Blue is a popular color. It’s one of my personal favorites, and I have three jerseys that feature blue as a dominant or prominent color. But I don’t think blue is a great choice for visibility. Note the cyclist in blue top and black shorts in the right third of the picture. Not exactly a stand out.

Red and orange show up well. I was following a group several weekends ago, and all were wearing different shades of those. My wife was in her salmon pink and orange jersey, and was riding with a woman in a red flower print top. I could see them clearly well before I could determine who they were.

So I’m at a loss to figure out why black seems to be such a popular jersey color these days. Cyclists in black seem to me to blend in with their surroundings. 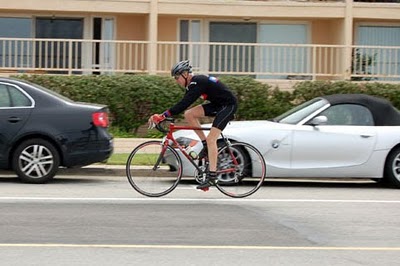 In addition to being less of a standout, it strikes me that black jerseys absorb too much heat. I own a jersey with black shoulders and a blue body. I wear it often, but during this hot sunny summer weather we’re having, it is not my first choice. I pick it when my other jerseys are in the wash. Both the Sky and Leopard-Trek teams in the Tour de France wore jerseys that were predominantly black. Ugh. I can’t imagine going more than 100 miles for days on end in the summer, in black.

A lot of cyclists prefer to go the understated way, though. They don’t like to dress in high visibility colors. Why? Often, it’s because they’re engaged in cycling for reasons other than sport. Commuters, for example, would like to wear their work clothes on their bikes. Touring cyclists might want to stop and visit attractions or shops on their routes, and darker clothing makes them less conspicuous in a crowd of non-bikers. Some might think the bright colored cycling jerseys themselves are dorky looking.

Other cyclists argue that color is not important — it’s how you cycle that matters. Make yourself prominent on the road. Take the lane when necessary. Make eye contact with drivers. Just because you’re wearing high-visibility clothing doesn’t mean drivers will see you.

As in most issues, there can be extremes. A line of cycling gear called See Me Wear is available that — well, see for yourself:

There’s even talk of requiring high-visibility colors when cycling. New Zealand is going through a debate along those lines right now. Proponents say anything that makes cyclists more visible is a good thing. Cycling advocates argue that making mandatory a type of clothing that some might see as “dorky” would discourage some people from riding — and could lull others into a false sense of security.

You wouldn’t find me wearing one of these warning chevron jerseys. But at the same time, I’m not going to take anything for granted. I’ll do what I can to ride safely, and to make myself known to drivers. But I’ll also do it in my red or yellow jerseys, and my hi-vis green jacket. And as I add to my cycling wardrobe, I’ll favor brighter, not duller, colors.