While I’m busy overcoming the cycling blahs (see previous post), I learned of a case where a really enthusiastic cyclist went out to beat a record for a segment on Strava — and lost his life when he collided with a car.

You’re probably aware of Strava — the GPS-based training aid that’s gaining in popularity by the day. I mentioned it here earlier this year. The main attraction of Strava seems to be its ability to divide a ride into segments. If you post the segments publicly, others can see your time for that segment and try to beat it.

Users have even coined a name for it, as noted on the Competitive Cyclist website:

Now, the family of the deceased cyclist, one Kim Flint, Jr., is suing Strava, claiming its general negligence led to the wrongful death of Flint. The complaint alleges that Strava breached its “duty of care” by failing to warn cyclists that the road on that segment was “not suited for racing” and “unreasonably dangerous;” for failing to take measures to ensure that KOM (King of the Mountain) challenges take place on safe courses; and for encouraging dangerous behavior. The suit, which seeks damages in excess of $25,000, contends that if Strava had done those things, Flint would not have died as he did.

Hey, I just report the facts. I’ll let you figure out whether the plaintiffs have a leg to stand on, or if this suit will be thrown out of court as frivolous. All I know is that, while I don’t use Strava myself, I do have several segments on my routes where I do keep track of my times — or, more often, my top speed. I don’t need Strava for that, and I don’t need a third party looking out for me to make sure my record-breaking attempts are done under pristine conditions.  I don’t need Strava to kill myself; I’m perfectly capable of doing that on my own.

Of course, I’m also perfectly capable of judging conditions for myself, and determining whether I’m comfortable challenging my best on a given day, or waiting until the wind, for the road surface, or debris, or reflected light, or whatever changes until I am comfortable.

I’ve made it clear in posts over the last year or so that I have settled into a style of cycling that suits me. I like to hang with the B-level riders. I’m not going to knock myself out to keep up with the strong guys on the Sunday morning club ride.

At the same time, I am an almost obsessive record keeper. I have four years’ worth of rides on Bike Journal, and can compare how I’m doing this year with how I’ve done in previous years. I can also compare how I’ve done on a favorite ride compared to how I might have ridden it a month, or six months, or a year ago.

But record keeping has gotten a lot more sophisticated over the last four years. Now, you have to have a GPS device that collects data during a ride and can be downloaded to your computer. Much more detailed information is available than had been before.

The big new player on the scene is Strava. It presents itself as an easy way to track your rides and collect all sorts of interesting numbers. Not just the ride time, average speed, maximum speed, etc. — heck, my $12 bike computer does all that — but Strava does so much more, and it displays the results in a colorful, attractive layout.

Want to see how today’s ride went? Here’s how Strava shows it to you*: 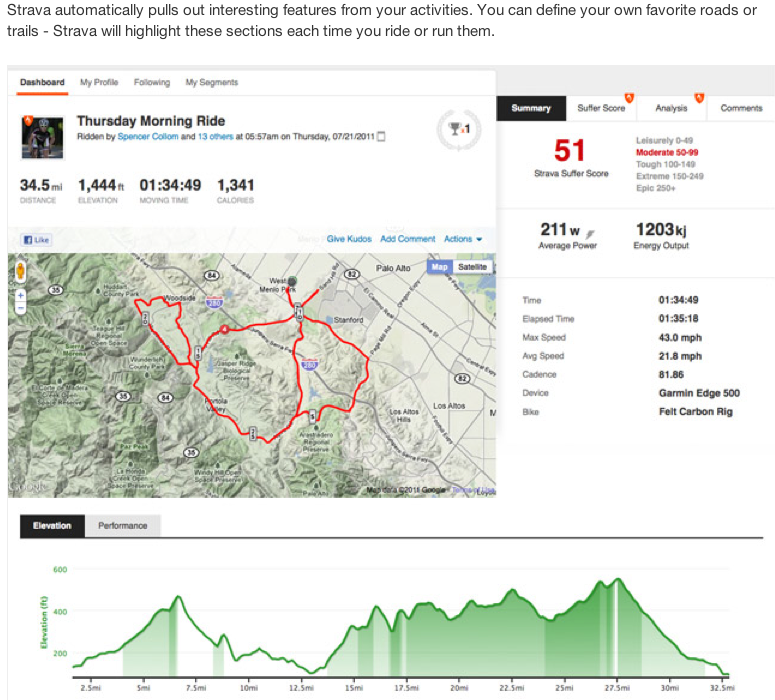 (Click on these pictures to enlarge them for easier reading.)

If you want to see how well you stack up against other people who’ve ridden the same route, or maybe just a particular segment of your route, you can do that, too: 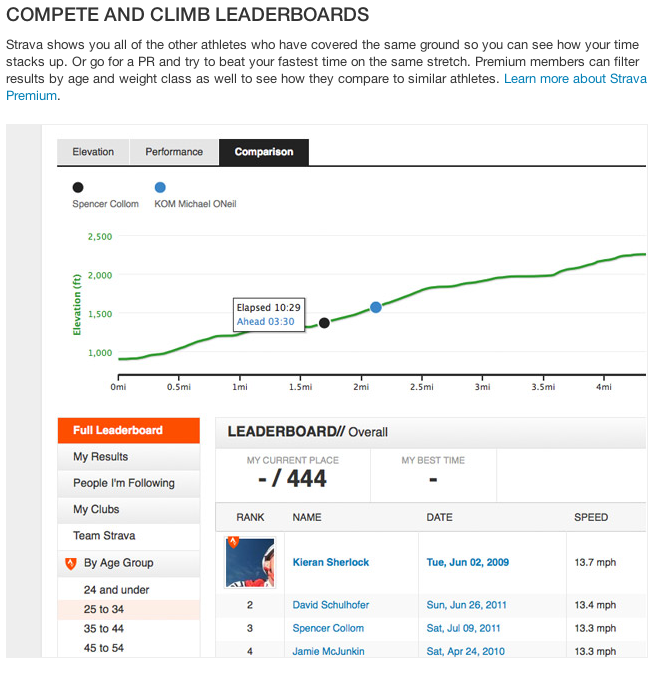 Not to be outdone, the ride mapping site I occasionally use — Map My Ride — has added segments, too. It offers a lot of the same data as Strava, but since it only started doing that recently, it doesn’t have as many comparisons available — yet. 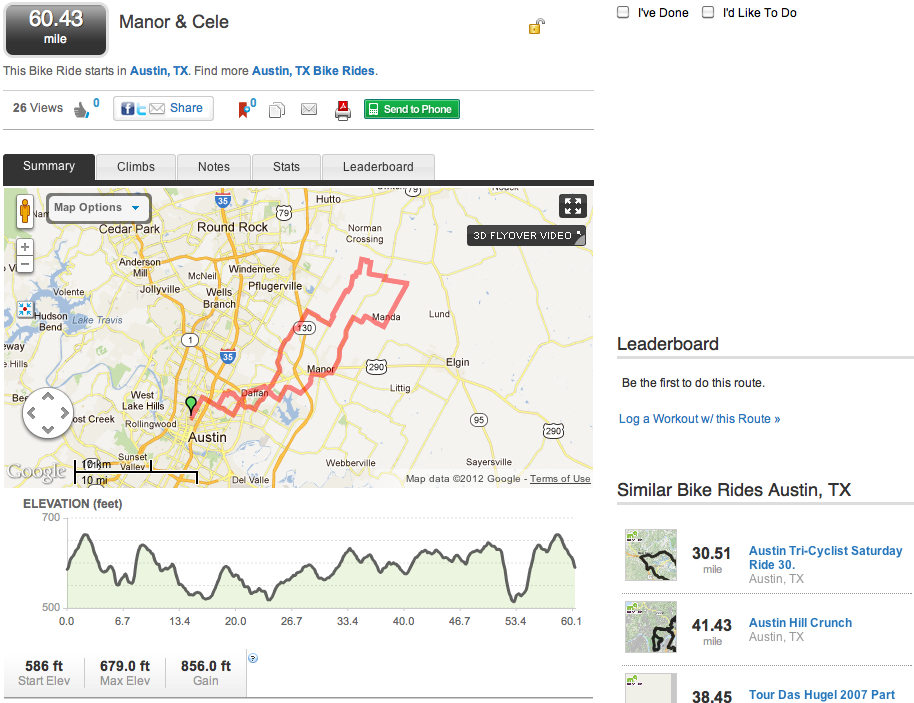 Now, in order to get all this information, you have to have a GPS device, from Garmin, or an iPhone or Android smartphone, or a Blackberry. Well, that counts me out. Don’t have ’em, don’t particularly want ’em.

But…I did a nice 19.2-mile ride after work this afternoon, and really felt good. That long weekend ride must have built up my legs, because today they were generating some power that’s not usually there. I finished with an average speed of 16.6 mph — about 1.5 mph faster than I typically do that route. Maybe if I was more diligent about comparing my times on various routes — or segments within routes — that would help me raise the level of my performance. But I’m not sure we’ll ever know, because purchasing those items is out of my budget for awhile.

And really, does all this competition that the data sets up really offer any benefits? I can’t answer that, but maybe our readers can. What do you think? Do you use Strava? Map My Ride for GPS? Like ’em? Hate ’em?

*Screen grabs from Strava and Map My Ride websites. 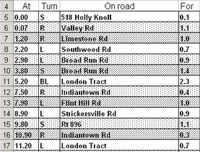 This morning, I joined several dozen riders for an informal group ride east of town.  It was a route I’d never ridden before, but had been meaning to, so I looked forward to it. And, the ride featured some nice touches: One person drove a sag vehicle, and riders could grab a map of the route, which included a cue sheet showing 20, 44, and 60 mile options.

I could see right away that I would have problems with the sheet. A standard letter-sized sheet of paper, the map filled the top half and the cues on the bottom. But the cues were in tiny print, and since I don’t wear bifocals while riding, I was going to have a tough time reading the small type.

I headed out right behind the lead group, figuring that I’d be fine as long as I could stay with them. I knew several people in that group had done this route before, and knew the way. What I didn’t count on was getting dropped by them before we had gone 10 miles. I found myself riding alone past farm fields and manufactured homes, dodging the occasional dog that came out to give chase.

And then came a corner. Which way to turn? I had folded the cue sheet into a small square, and tucked it under the hem of my left shorts leg. If I was going to be able to read it though, I’d have to stop and pull it out.

So I turned. Yeah, you guessed it. So I doubled back to the corner, and I did stop and hold the tiny cues up to my face to be able to read them.

Two young women caught up to me, and we held a confab at the corner about the correct route. Once in agreement, we headed out.

Yeah, you guessed it. We picked the wrong road. By now, I had tired of the folded cue sheet rubbing against my thigh, so I shoved it into one of the back jersey pockets. When we got to the next corner, my cue sheet was limp and damp, already starting to tear along the folds.

We figured out which way to go that would get us back to the route. At a T intersection, we got into a spirited debate with two other women about whether to turn right or left. I pointed out on my limp, floppy, and damp map that a right turn was in order.

All seemed to be well. A turn was coming up, and we recognized the road as one on the route. The two contentious women went a different direction. My cohorts and I spotted a spigot and hose in the corner of a country cemetery, and stopped to refill our water bottles.

I figured I’d check the map to see how many miles to the next turn, and reached into my jersey pocket to pull it out. Little pieces of soft, wet, paper fluttered away on the breeze. The part I held in my hand tore like a knife going through warm butter.

One of the girls had the same problem, but the other somehow managed to keep her map dry. We realized we had made yet another wrong turn, and got ourselves pointed back to the start of the ride.

Eventually, we made it back – thanks to the dry map.  I’ve gotta come up with a way to keep maps and cue sheets dry in the future.

Randonneurs use handlebar bags with clear plastic windows on top for their cue sheets. Other riders use zip ties to secure a cue sheet in a nifty plastic window to their handlebars. A Zip-Loc bag would probably work.

Do you have your own preferred way to keep cue sheets dry and usable? I’d love some ideas.