I decided not to ride Sunday morning, because it was pouring rain when I woke up. Dumb move. Things were pretty well dried out by 9 a.m., and if I’d been a little more patient, I could have gone. As it was, I did a short ride with my wife, as I mentioned in the last post.

But I wanted to make up for the lost B ride, so I posted that I would go Monday morning, since it was a holiday. We would do the Same Fitzhugh route that the A’s did on Sunday. Three others came out to join me, including Yasmin and Frank, two new B riders who rode with us for the first time last week.

Both of them have recently bought new bikes, and they’re both strong riders who will only get stronger and faster as they keep riding. As we negotiated the rolling hills along Fitzhugh Road, Frank stayed with Buddy, who moved well out in front. Yasmin got ahead of me, and while I had some trouble sticking with her, we were closer together than Buddy and Frank were to us.

At the turnaround, about 16 miles out from the start, Yasmin complained that her saddle was bothering her. She’s a tall woman, and the bike frame she had appeared to be sized for a man. But the saddle was a narrow racing style. I could relate to her distress. I rode a narrow racing saddle for about a year, when I finally ditched it some something wider and more comfortable.

“When you take it back to the shop, ask them to fit you with a wider saddle,” I suggested. Because of women’s wider pelvises, they need wider saddles than men, anyway.

At another rest stop farther on, both Yasmin and Frank expressed concern about their hands. They were getting numb, and they were shaking them out periodically.

In Frank’s case, he was riding with his elbows locked. “One of the guys told me to ride with my elbows bent,” he said. “I’m trying to get used to that.” Bending the elbows takes weight off the hands. The saddle should have been positioned in such a way that the elbows naturally bend when the rider is in his standard riding position. When I had my bike fitting some years ago, the fitter said it’s more common that people have their saddle too far back rather than too far forward. For most people, he said, moving the saddle forward will provide that elbow bend and make for a more comfortable riding position.

Fitters often use KOPS, or Knee Over Pedal Spindle, as a way to determine saddle fore-aft position. But the other day I was re-reading Peter White’s excellent contrarian article about bike fitting, where he pooh-poohs that notion. It’s all about balance, he says, the kind of balance between power and comfort. The article inspired me to do some tweaking on my saddle position.

It turned out that Yasmin was pushing her hands against the brake hoods. While that seems like a normal position for a new rider, it can cause the hands to go numb quickly. I showed them how to position the hands so the pressure is on the outside heels of the hands, not the webbing between the thumb and forefinger. “It usually doesn’t take much of a shift in position to relieve the pressure,” I said.

We wrapped up the ride and went our separate ways. I hope the tips about saddle width, bending the elbows, and hand position will help Frank and Yasmin enjoy their riding. I fully expect it will have negative consequences for me — it’ll just make them stronger riders, and I’ll be left behind again.

You might recall that several weeks ago I complained about the hot spot I get on the bottom of my left foot after riding for about 30 miles. It really makes longer rides unpleasant, and since I like to do longer rides, it’s a real bummer.

I dug up an old article that said the hot spot is actually caused by a neuroma — a swelling of the nerve between toes. There was even a way to deal with it — things called matatarsal buttons.

Maybe I’m a lousy shopper, but I never found any. (Not that I tried all that hard.) It occurred to me, however, that I could come up with a treatment of my own. So I did. 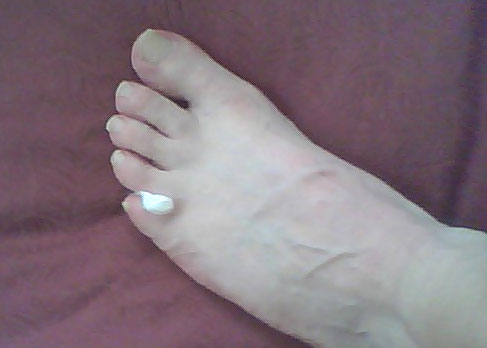 Ta da! A cotton ball torn in half. I stick half between my two outside toes. It seemed like a stopgap treatment at the time. But it works!

Now, any time I plan to be on the bike for more than an hour, I make sure to rip apart a cotton ball, and stick half between my toes.

I admit, I haven’t really put it to the test on a long ride yet. I have done 36 miles however, and I never had a complaint from the foot. Anecdotally, it works for me.

As usual, it turns out to be a simple solution. I’m irked that when I was last bothered by foot problems — a numb little toe — I spun my wheels trying all sorts of remedies. I even slashed my old biking shoes. Nothing worked.

It’s counterintuitive to think that spreading out your foot will ease a problem that seems to be caused by too-tight shoes. But that’s what it did.

Let me know if you have had foot or toe problems, and have come up with your own solution.

Long-time readers will remember about a year ago I used to regularly carp about a problem with my feet. Specifically, my left foot. More specifically, the little toe on my left foot. It would go numb after riding much more than an hour, and bother me for the rest of my ride.

I tried a number of ways to deal with it, including fastening my shoe straps as loose as possible, adding arches of various sizes and shapes, and even cutting a gash along the side of the shoe. Nothing worked.

I finally concluded the problem was not with my foot, but with the shoe. They were cheap Chinese-made shoes that I bought when I first took up biking. Fine for rides of an hour or less, I just couldn’t keep wearing them on the distances I wanted to ride.

My wife came to rescue, when she bought me some new shoes for Christmas. They’re by Specialized, and are one of their premium models with a rock-hard carbon sole. I exchanged them for a larger size, figuring that since feet swell with exercise, a larger shoe would minimize the toe numbness.

Well, after nine months of experience in the new shoes, I can report that they work. I haven’t had a numb toe since I first put them on.

Wouldn’t a larger pair of the old brand have done the same thing? I can’t say for sure, but I know those shoes don’t come with carbon soles — just nylon. So there’s going to be some flex in the sole, and that could lead to the same problem. More likely, it would lead to a hot spot on the foot. Either way, the old adage rings true once again: You get what you pay for. When it comes to my feet, I’ll pay the price to keep them comfortable.