Readers outside Texas may be aware of the fires that have plagued our state for the last few days. One of the biggest fires, on the east side of Bastrop, has severely damaged one of my favorite biking areas, Bastrop State Park. 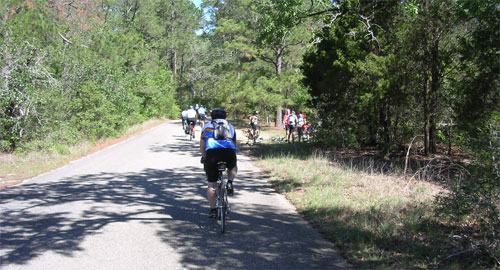 Riding through the pines in Bastrop State Park during the MS150, April, 2009.

The park is special for two reasons. First, the Bastrop area is home to the “Lost Pines” — the westernmost stand of pine trees in the state. Pines are generally found at least 100 miles farther east, closer to Houston. The majestic trees give Bastrop a feel you don’t get anywhere else in central Texas. The second reason is the hills. Cyclists flock to the state park because the park road running through it has a number of hills. They’re not too long, but they’re steep. The combination of pine forest and challenging hills is hard to beat. In fact, the annual Houston-to-Austin MS150 ride goes through the park on its second day. Cyclists agree that the hills in the park are one of the highlights of the ride. 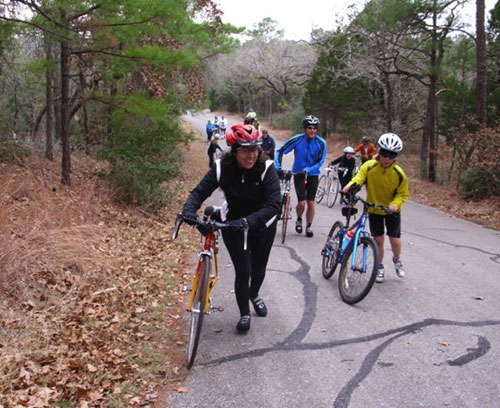 Cyclists walk their bikes up a steeper-than-it-looks-in-the-picture hill during the Pedal Thru the Pines ride, March, 2011.

We’re not sure just how badly the fire will affect the park, although a story filed this evening on the Austin American-Statesman’s web site indicates that as little as 50 acres of the pines in the park might be left. 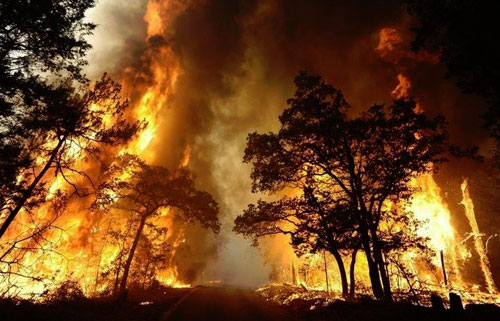 The description brought back memories of my earlier life as a TV news reporter in northern Minnesota. I covered my share of forest fires there, and I particularly remember one night, driving along a park road with pine trees blazing on either side of me. The heat was so intense the trees literally exploded around me. Authorities at the Bastrop fire say the same thing is happening here.

A widely-distributed shot by Deanna Roy shows the Austin skyline with the Bastrop fires in the background. Bastrop is about 25 miles east of Austin.

It will be awhile before we have a complete assessment of the total damage to the park. But it’s clear that biking won’t be the same there for a long time. I’m kicking myself now. I had planned to get out there and ride several times this year, and each time, managed to invent an excuse to stay closer to home. I’m glad I got to experience the park once, anyway.