It’s an article of faith for every cyclist: On your birthday, you have to ride your age. (I don’t know how my friends north of the Red River of Texas manage that during winter months — I recall that snow was usually on the ground for my March 4th birthday before I moved down here.)

So, I warned the club after last week’s B ride that I would be doing a birthday ride today, and that everyone was welcome to join. Well, the A riders had their route all mapped out — a variation of one of our popular rides that included some roads we seldom use on our club rides. The B riders decided to tackle some rollers nearby. No one was enthusiastic about attempting 61 miles, so it looked like I would be left on my own.

Then I heard from Bike Noob reader Dan Colvin. He and I had exchanged emails several times over the past few months. It turns out that he discovered Bike Noob and, like some others out there, decided to read backwards through the entire blog — four years’ worth of posts. If nothing else, he should get some kind of medal for that. But Dan was commenting this time on the recent post about favorite websites, and noted that while he’s still trying to figure out his riding style, the idea of going longer distances without trying to set new speed records appealed to him. I suggested if he wanted to get in more miles, he should come along with me. And he did!

We left Starbucks a little before the advertised 8:15 departure time, bundled up against the 48-degree (9C) chill. The morning was glorious — clear, sunny, and very little wind. We made our way east along city streets, then turned south. The pace was comfortable, about 15 mph. We didn’t chat much — the traffic was too heavy to ride side-by-side.

We made it through Buda, then Kyle. Seven miles south of Kyle, Old Stagecoach Road comes to Five-Mile Dam Park, a nice county park on the north edge of San Marcos. We could have gone a little farther, and reached the apartment ghetto for students at nearby Texas State University (Where I am on the faculty), but I opted to turn around at the park. Distance-wise, we’d be fine.

But on the return leg, Dan sensed a problem. He stopped to check his rear tire. “I thought I felt something,” he said, but the tire seemed all right. Several miles later, he said we’d have to stop so he could change his tube. The tire was going down. We stopped. He’s one of those 10-minute tire change guys, so we were almost ready to roll in a short time. But his mini pump wasn’t cooperating. He couldn’t get enough pressure in the tire. I lent him my Topeak Road Morph (the best mini pump going!) and we took turns trying to get the tire pumped up to where it should be. Finally, it showed 7 bar on the tiny pressure gauge. We were rolling again.

By now, the temperature was rising nicely. The chilly temps we had begun the ride with had morphed into nearly summer-like conditions. Dan had shed his vest and arm warmers on the downleg, and I had taken the sleeves off my windbreaker, but now I was uncomfortable. We stopped between Buda and Austin so I could get rid of the wind vest and my leg warmers. It was now about 65 degrees (18C).

The final miles to our starting point were uneventful. Even the traffic was less than usual — a dicey left turn off a busy road into a neighborhood went off without a hitch, because we had no cars bearing down from behind, and nothing oncoming — really unusual for that intersection. We made it back at about 12:30, and I think we both had miles left in us (although Dan had done 70 miles the previous day, so I’m not entirely sure).

It turned out I needed those miles. Our little round trip jaunt gave us 58.1, according to my cyclocomputer. That left me three miles short of riding my age. Dan and I said our goodbyes, and I headed home — but took the long way around to rack up those missing three miles. Total for the day: 61.4. Happy birthday to me.

Sharp-eyed guest poster Don Blount came across an interesting tidbit, and offers it up for discussion:

This image was on the VeloNews Web site in a photo gallery of George Hincapie’s new training bike. In this closeup you can see what appears to be a Blackburn air pump attached to the frame beneath the water bottle cage. 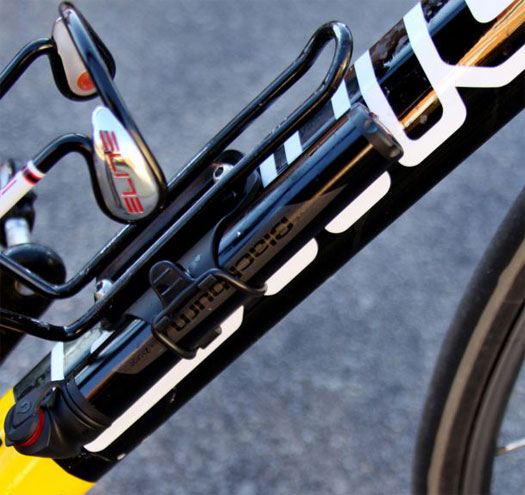 Now if one of the top racing pros carries an air pump on his training bike, why wouldn’t everyone else? Given that, I’m sticking with CO2, at least until I run out of cartridges.

I was chatting with a friend the other day who’s just getting into biking. He was telling me of his experience with his first flat. No pump, no CO2. He had a patch kit in his seatbag, but realized it was worthless unless he could fill his tire with air, so he wound up walking the bike home — three miles.

“I saw these canisters of CO2 at the bike store,” he said. “Are they any good?”

Here we go again — the endless debate between CO2 and a pump.

Well, I told him, each has its advantages. CO2 takes up just a little space in your seatbag, and you don’t have to carry a pump. Just attach the inflator, stick it on the valve, and whoosh! you’re back in business. He liked that. He thought he’d try it.

But wait a minute, I said. There’s a problem with CO2, too. Sometimes, you misfire it and waste all the gas in the canister. Then, you can find yourself in the same predicament you were in last week.

I told him of a recent A ride from our club, where a guy flatted along a major highway. One of the other guys had several CO2 cartridges — and managed to depressurize all of them. Without inflating the tire. Luckily, another rider in the group carried a pump, and stood by to watch the antics — then stepped in and saved the day.

“It took me probably 10 minutes to pump up a tire to 70 psi,” said guest poster Don Blount in an email awhile ago. “That’s longer than it took to change the tube.”

I’ve been there. It doesn’t take me that long to pump a tire up to 70, or even 90 psi. But those last 10 pounds to 100, to make it roadworthy again — I should be doing some strength work at the gym.

But Don also said he blew a tube with one cartridge, and when he went to use another one on another tube — it was a dud. He thinks he might just suck it up and go back to the frame pump.

At least that’ll get the tire inflated. With a cartridge — I’m guessing 50-50 odds.

My friend went back to the bike store and got a frame pump.