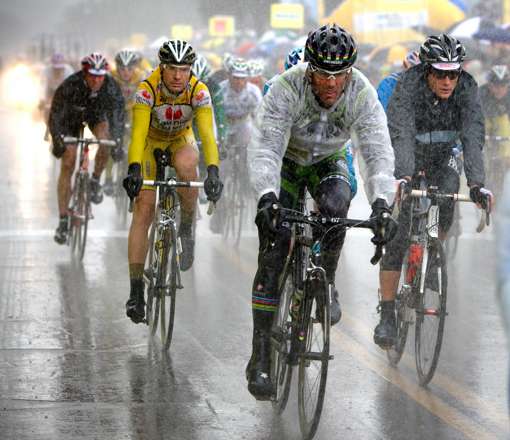 Here in Central Texas, mid-summer is a crazy time to write about riding in the rain, since we typically have so little. Still, I was caught in a downpour several weeks ago, so it can happen.

I noticed while riding in that downpour that I am a lot more skittish now when riding in wet conditions than I used to be. That’s because I’ve had some bad experiences in the rain. A couple of falls caused me some injuries, and at my age, it takes longer than it used to to recover from injuries.

So I asked Bike Noob readers to send me their tips for riding in the rain. I got some good ones. Here are the best:

Slow down. This is a no-brainer, I think. But there are good reasons to make this the number one rain riding strategem.

Corner slowly. Take corners slower than usual. This is where I screwed up. In one crash, I turned from an older asphalt surface that absorbed the rainwater, onto a newly resurfaced street where the water stayed on the surface. My front tire slid out from under me. If I had been prepared for this possibility, I would have taken the curve much slower than I did. In the second crash, my rear wheel slid out because I turned too quickly on a wet street (It wasn’t even raining anymore!).

Some experienced riders suggest leaning the bike a lot less than usual when cornering on wet roads. Other riders say this is bunk. But because of my personal experiences, I try to lean my body a bit in a corner, while keeping the bike as upright as possible.

Pump the brakes. Since the brakes work by gripping your rims, you have less stopping power when the rims are wet. So it’s a good idea to allow more time to stop. Pumping the brakes from time to time will squeegee water off the rims. Of course, you should start pumping them early as you approach a stop.

Reduce tire pressure. Letting about 10 pounds out of the tires will increase contact with the road surface. That should give you better control.

One thing that struck me about this advice is that I’m already practicing most of this. I’ve been tripped  up in the past by not stopping to let some air out of the tires if I get caught in the rain. That, along with more cautious cornering, are probably the two most important things I can do to give me greater sense of control while riding in wet conditions.

Oh, and thanks to everyone who sent tips about dressing warmly, equipping the bike with fenders and wider tires, etc. In Texas, few riders I know have “rain bikes.” And since we don’t get a lot of rain, I don’t know anyone who has a set of fenders handy to mount in the event of a shower. I was mostly interested in riding techniques for this post.

But a couple of acquaintances told me they enjoy the rain. “Riding in a torrential downpour is something you won’t forget,” said one. Another recounted a 100-mile ride done mostly in rain. “It was probably not the wisest decision we could have made,” he said, “but in the end, the ride turned out to be epic.”

And whaddya know, overnight we had a pretty good thunderstorm. When I got up early for the Sunday club ride, rain moved in again. I finished breakfast and watched the lightning brighten up the block, and sheets of rain nourish our already-browning lawns. It was a great opportunity to put some of these rain riding tips into practice.

Instead, I invoked my first rule of riding in the rain (which some of you also shared with me) — I don’t. I waited for the rain to end and the roads to dry. Then I went out.

Okay, I have to ‘fess up. I am hesitant to ride in the rain. I shouldn’t be, and I have a reasonable amount of experience at it — although in Central Texas, we have far less opportunity to ride in the rain than people in other parts of the country.

Here’s what triggered this post: I have fallen four times on the bike since 2009. Two of the four falls were the result of rainy or wet  conditions. Each time, I had little in the way of open wounds, but took a long time to recover from being banged up. Shoulders, ribs, hips, etc.

I joke with my friends that “I’m too old to fall.” I say that because at my age, I know recovery takes longer. And yet, back in March, I did fall.

And three weekends ago, I was on a club ride when the skies opened up. Oddly enough, it happened on a stretch of road where I had been caught in a downpour just last summer. Then, I recall sticking with the group, and covering about 10 soaking miles. This time, I found myself reacting in a skittish, almost timid way to the rain.

I slowed way down. The guy I was riding with took off, and in no time was a quarter mile ahead of me. The shower we were in didn’t last long, and the road actually started drying out after the next couple of miles.

A member of our club whom I don’t know well was recently hit by a car, and although his recovery is nearly complete, I’m told he has a sort of post traumatic stress disorder about it. He’s almost scared to get back on his bike and ride in traffic.

I’m not that bad about rain, but I’m a lot more cautious than I used to be.

And yet, people ride in the rain all the time — relish it, even. So, readers, I’m asking for some reader participation here.

How do YOU ride in the rain?

Rather than post in comments at the bottom of this page, I prefer that you email me. I’ll compile the suggestions, tips, skills, guidelines — whatever you want to call them — and put them in their own post sometime in the future.

It’s unlikely I’ll be looking for rain riding opportunities even after I get some tips — but I’m hoping I won’t be as hesitant about it as I am now.

Again, to respond, just send an email to rainycamp AT yahoo DOT com.

I waited at Starbucks for other B riders to show up for this morning’s ride, but only one did. He was new to the club, and this would be his first ride with us. I wondered where the other B’s were, because it sounded from their posts earlier this week that they would be out.

But as I walked by Bruce, one of the A riders, he remarked that we would be in for some wet riding.

“What?” I exclaimed. “The forecast didn’t say anything about rain.”

But Bruce called up the Weather Channel radar on his iPhone, and sure enough, there was a line of showers bearing down on us from the northwest.

I should have known better. Last week, we got lots of rain — and the various TV weathercasters and other sources blew that, too. Why would this week be any different? Now I knew why there were no other B riders this morning. They had been smart enough to check their weather radar, and decided not to ride in those conditions.

Since the ride was headed south, we figured we could stay ahead of the rain for awhile. We made fantastic time, getting to Buda about 15 minutes sooner than it usually takes me. The other new guy and I had no trouble keeping pace with the A riders as we sailed along the road.

At an intersection, though, we had to make a decision. The clouds hung dark and low to the north. We could turn back toward the rain, or continue south. The new rider said he wasn’t ready for the kind of distance a southerly ride would involve, so we turned north — smack into the wind that had pushed us out so kindly.

In about a mile, we were in a downpour. We took shelter under some trees along the road, and waited for the rain to pass. It didn’t take too long, and the sun came out and dried things quickly. After going another mile or so, we were back on mostly dry pavement.

I suppose if I had done what I usually do on ride mornings — check the weather radar — I too, would have stayed home until the rain came through. As it was, it wasn’t as bad as it looked on the radar, and it was nice to get in a decent ride.