I mentioned in my year-end post that I’ve really enjoyed meeting people online, then getting to ride with them in person. That happened again today. This morning, Mrs. Noob and I went over to Austin’s Veloway to do a few laps with Ramon H. and his wife.

Bike Noob readers might remember a guest post Ramon recently did about his new bike. We first made contact when he sent me an email about how he got into cycling. I enjoyed it so much I had him turn it into a guest post. We’ve corresponded a lot since then, and briefly met during the MS 150 last year. But we’ve never really spent any face time together, until this morning. 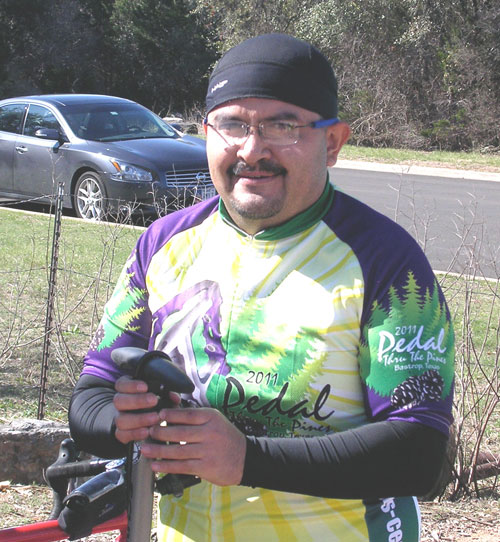 Ramon readies his gear for the Veloway ride.

Ramon and his wife, Irma, were in the area to ride Pedal Thru the Pines in Bastrop, about 25 miles east of Austin. It’s a ride known for its hills, and is a locally popular route. But this year, it was more of a bear than usual. On top of the generally short, but quite steep hills in two state parks, it was cold this year. And rainy. And windy. 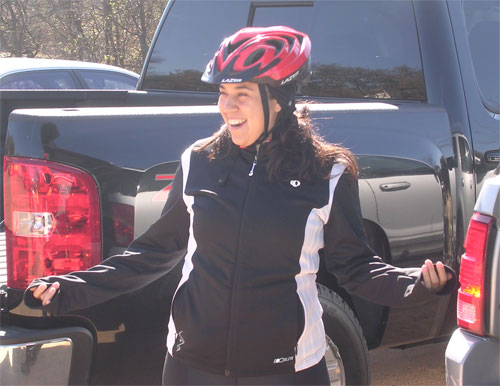 Ramon and Irma live in the Rio Grande Valley of Texas, along the border with Mexico. “We’ve got three highway overpasses on our Sunday route,” said Ramon. “Whoever gets up them first is the King of the Mountains. There’s a lot of competition each week.” Otherwise, their rides are flat. Just plain flat.

So the hills, combined with the wind, rain, and cold, took their toll. Irma was especially feeling it, and when I told them that the Veloway is 3.1 miles long, she opted to do only two laps. Since that’s what Pat usually rides at the Veloway, the two of them fell in together quickly. Ramon and I did three laps. 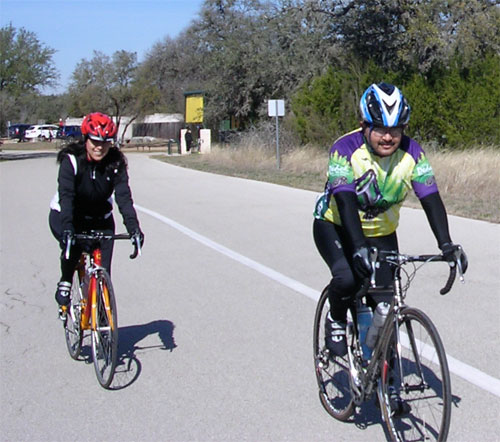 Irma and Ramon head out for their inaugural Veloway lap. 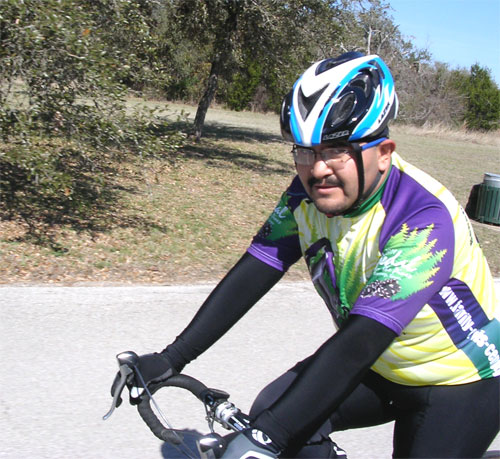 KOV — King of the Veloway.

When it was over, we agreed to meet at a nearby restaurant for lunch. Talk didn’t get far from biking. Irma rides a lot less than Ramon, and doesn’t keep up with the big dogs, “…but I like to finish what I start,” she said. She completed her first century, the Jalapeño 100 in Harlingen, Texas, just last month. Now, she finds herself getting more and more into bike advocacy, and has appeared at her local city council to lobby for more bike lanes on city streets.

To get in more saddle time on weekdays, Ramon organizes a 5 a.m. group ride on Tuesdays and Thursdays. No, that wasn’t a typo. The ride begins at 5 a.m. Usually, 4-6 people show up. They get in anywhere from 15-25 miles, and despite his pleas, it often turns into a race. At the college where he works, Ramon helped organize a cycling club, which competes in statewide events. Oh, by the way, Ramon’s job is in network security, which is why he prefers I don’t use his last name on this blog. He has first-hand experience with the damage hackers can do.

The visit was cut short because they needed to hit the road for the five-hour drive back to the Valley. We tried to entice them back up to this area by telling them of some other rides they’d want to sample. We’ll see. I’d love to ride with you again sometime, amigo. Maybe we’ll even go fast.