My wife and I were out on a ride close to home the other day, when I saw it coming. I was in the bike lane of a four-lane divided thoroughfare through our neighborhood. It swoops in a shallow curving downhill past an upscale strip mall. As I approached the entrance to the mall, I could see a pickup truck in the oncoming left turn lane, ready to turn right in front of me.

He had his turn signal on, and he was stopped. But my internal alarm system was clanging away: “Better brake! Better slow! This guy is going to turn right in front of you!”

He did. I squeezed my brake levers hard, and slowed enough to let him pass across my path just before I reached the mall entrance.

Come on, man. I had the right of way. You were making a left turn. Oh, that’s right. Your four-wheel drive pickup is jacked up so high, you intimidate other pickups, not to mention regular cars, and most of all, cyclists. And you’re right. I’m not going to exercise my right of way if it means I’ll wind up getting smeared all across the bike lane, mall entrance, parking lot, etc.

When my wife caught up to me, she said, “That was pretty close.”

“You know,” I replied, I don’t mind if a car or truck turns in front of me, as long as I don’t have to slow down. But when I have to brake like that, it means he’s just being a jerk.”

We continued our ride, and turned onto the Mopac expressway extension. Reaching the turnaround point there is always a good feeling, because we have a slight decline on the way back, and can get up to some decent speeds. I surged ahead of Pat.

As I approached the entrance to a nice residential area, I eased the bike into the left half of the shoulder. I always do that in the hope that anyone turning into the neighborhood will slow and pull into the right turn lane behind me. That’s a whole lot better than them passing you, slowing quickly, then making a right turn cross my path. This time, I heard a loud air horn behind me.

I glanced over my shoulder, and saw another jacked-up pickup gaining on me. It had blown its horn when it pulled even with Pat. Now it was my turn. He got right next to me, and didn’t ease left to give me a little more room. Instead, he stayed planted where he was, and let go with his air horn again. The loud noise was jarring, but I expected it after what he had pulled before, so it didn’t startle me.

Farther ahead, two cyclists were trading pulls and making better time than I was. I could see what was going to happen. Sure enough, the bozo blasted his air horn again — two blasts, apparently one for each cyclist. They weren’t startled either.

I guess he would have been really entertained if one of us freaked out when he blew his horn, and started to swerve, maybe lose control — maybe even fall at speed along a highway where most traffic moved at 65 mph. Jerk.

The only time I get that from cars is when I’m passed by a car full of high school boys. That’s not a problem, since I was once a high school boy (eons ago), and I know they’re jerks by nature. It’s the grownups in the pickups that really bug me. There must be something in the exhaust from a six-foot off-the-ground four-wheel drive pickup that has tractor-tread tires about five feet in diameter that affects the brain.

I don’t own a pickup myself, although I’ve driven them when I’ve needed their convenient carrying capacity to move furniture, appliances, and other bulky items. So I’m not anti-pickup. But two incidents within a half hour of each other on the same day is a bit much for me. I just can’t understand why the highboys are mostly driven by jerks out to aggravate others — especially cyclists — on the roads.

Lately, it seems that I’ve been grumbling a lot to myself about drivers on the road — and how little they seem interested in sharing it. I don’t usually act on my frustration, although I have been known to shout (not that they can hear me when their windows are all rolled up), or flip the bird.

That’s probably not the best way to cope when you think you’ ve been done wrong by a motorist, though. A better way (at least, a more mature way) is suggested in this comic I just came across online. Take a look and see what you think: 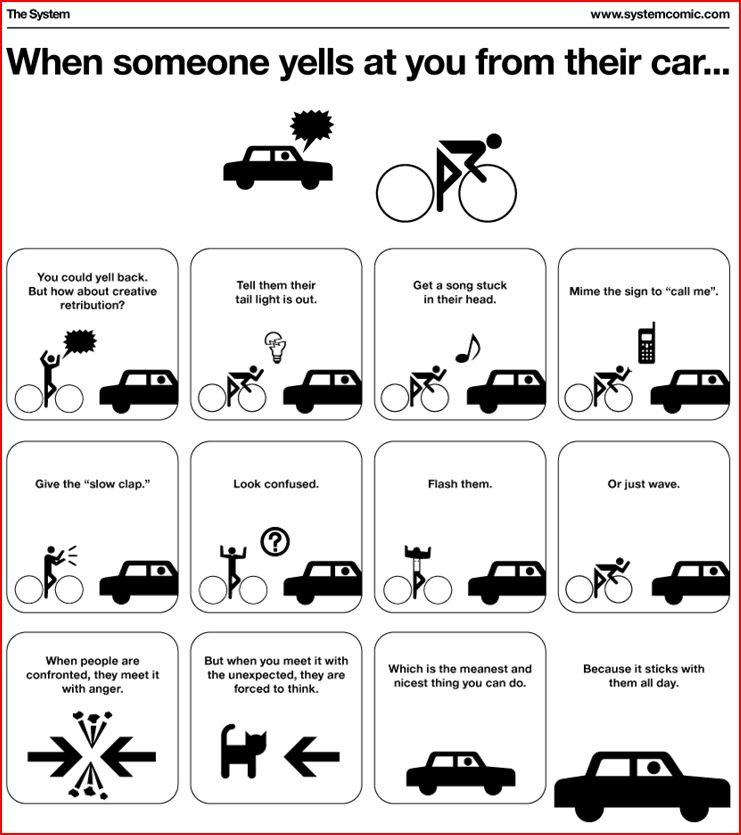 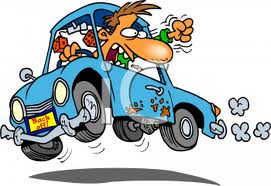