I’ve run across several streets with “sharrow” markings lately. Sharrows are generally a great idea. They signify the sharing of traffic lanes between bikes and cars, and thereby let cars know that bikes may be around, may be taking the lane, and that it’s all right to do so. However, one recently added sharrow in Austin isn’t working. 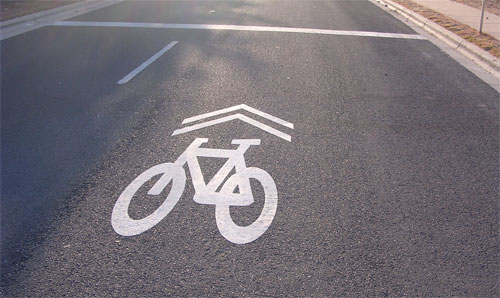 Here’s a good example of a proper sharrow. It occupies the right lane, leaving the left lane open for motorized traffic. But bikes and cars can share the sharrow lane.

Sharrows are great in theory, and in many cases, like the picture above, they work. But recently the city of Austin added a sharrow to a right turn lane — and that causes problems that shouldn’t happen. Here’s the situation — intersection of Escarpment Blvd. and Slaughter Lane. (Slaughter is the left-right lane in this picture.) Escarpment is a divided road, two lanes in each direction. The northbound (right) lanes widen to four lanes just before a stoplighted intersection. I travel this route at least three times a week. My way continues north past the intersection. 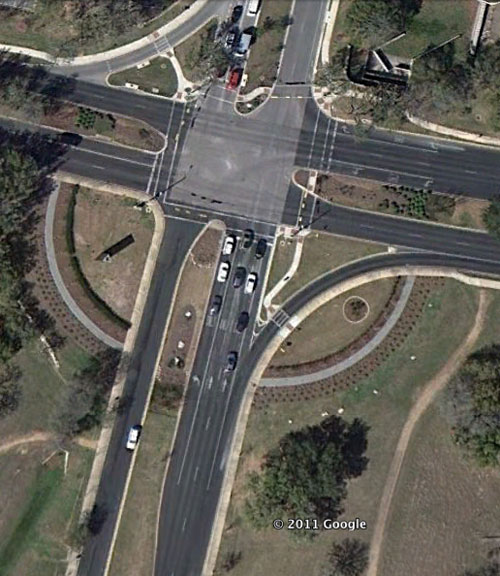 This Google Earth view was taken before the sharrows were added. In the picture, you can see there are no markings before the right turn lane. The through lanes and left turn lane are marked with arrows.

So here’s how I used to negotiate it: Approaching the right turn lane, I would signal my intention to move left, and take the through lane. That way, any cars behind me that wanted to go right would (theoretically) have to slow down and turn right behind me.

Cars have a tendency to pass bikes and then turn in front of them. That either forces the bike to slam on its brakes, or hug to curb to avoid the car. But that also put the bike in a right turn lane, where he might not want to be.

Now, the city has made the right turn lane a sharrow. Here’s what it looks like: 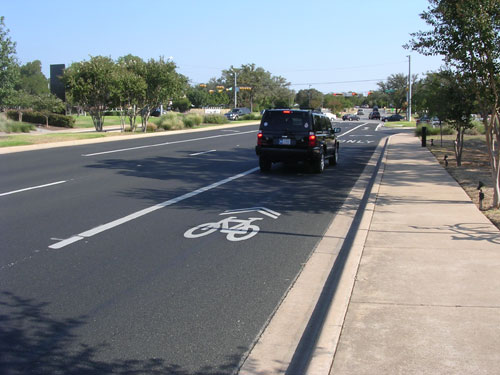 The SUV is making a right turn. Note from his position in the lane that he entered the lane late — probably to make sure he got by the crazy biker taking a picture, even though my bike was off the road and on the grass. If a bike had been in the sharrow, the SUV would have cut him off. A couple of weeks ago, I saw that very thing happen to a lady on her bike. A car entering the right turn lane ahead of her forced her into the curb, and she wound up making a turn she didn’t want to make. The driver should have let her get past the turn, and dropped in behind her to make his turn. 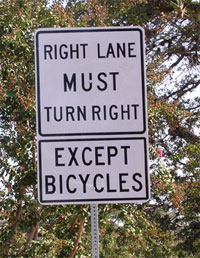 So the problem would seem to be one of education. I’m not sure how many drivers know what sharrows even are. Heck, I’m not sure how many bikers know what sharrows even are — the lady in my example didn’t seem to. Two signs at the entrance to the right turn lane indicate that cars must yield to bikes. Yeah, that’s going to happen.

When the lane was re-striped two months ago, and the sharrow symbol added, my initial reaction was, “Cool! This will be easier to get through.” It took me about a week to rethink that. Now, I do the same thing I used to do. I take the lane before the right turn lane starts, sharrow be damned. When I’m in the lane, cars have to slow for me. When I’m in the sharrow, they think they can get around me.

I applaud the city for trying to make travel easier and safer for cyclists. But I’m afraid this time, they achieved just the opposite.