Here’s a guest post from a reader on the other side of the globe, 17-year-old David Low of Singapore. (To remind our American readers, “pavement” is the U.K. English word for “sidewalk.”)

Should I give up or should I just keep chasing pavements? — Adele

I’m not sure how many budding teenage cyclists read Bike Noob, but as a 17 year-old kid, I thought I’d like to share my thoughts on cycling with other cyclists of my age.

I live in Singapore, a small city-state that is only 710 square kilometers large (268 sq. miles — roughly 3.5 times the size of Washington D.C). With an equatorial climate, the weather here is perfect for cycling all year round. However, the small island that my country resides on means that space is at a premium. To have dedicated bike paths that other countries can have is a luxury that we simply can’t afford.

Many beginners who are afraid to cycle on the roads start out on the pavements, and I think that’s fine. However, I feel that cyclists should try and keep off the pavements as much as they can because:

It may be only two reasons, but I think that they are very important, and we can’t overlook them. Of course, sometimes the pavement can be safer for all the budding cyclists out there, but I always wondered where and how did everyone learn how to bike? Did you guys take the pavements? I’m sure the Bike Noob readers can chip in! 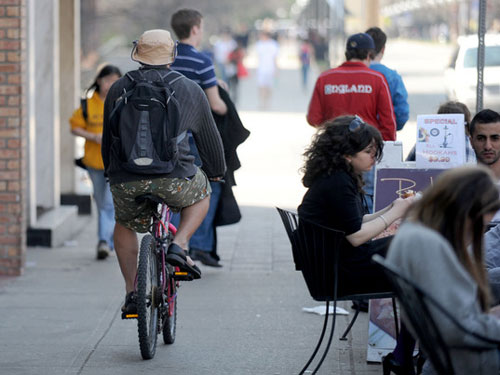 It’s here though that I would like to share my personal story on how I literally flew off the pavement to learn how to cycle on the road, and why I don’t recommend cycling on pavements.

In December 2007 (I was 14), as a complete newbie, I did not have the confidence to cycle on the road, and kept to the pavements like a good boy. I was cruising along at about 20 km/h on my mountain bike when I was startled to see a large gap (almost half the pavement was cut out, and it was now flush with the road level with a shiny new manhole cover where it used to be) in the pavement that didn’t use to be there. Before I could react, my front tire dropped into the gap and I came to a complete stop. While my front shock suspender largely cushioned the impact of the fall, the collision still sent me flying over the handlebars onto the road, right smack in the middle of a bus- priority lane.  You could imagine how horrified I was at the realization of where I ended up on.

Fortunately, luck was on my side, and the traffic light behind me had turned red. The few cars that were headed my way managed to avoid hitting me.

That incident got me off the pavement and onto the roads and made me a staunch advocator of keeping cyclists off the pavement. Although that close brush with death still haunts me, I am proud to announce that I am a confident cyclist today, rocking a Felt Z-80 road bike!

I rode on the sidewalk the other day.

I know, it’s terrible. Real bikers just don’t do that. You might run the risk of being hit by a driver who isn’t expecting to see a biker on a sidewalk. Bikes have the same rights and responsibilities on the road as motorists. Take the lane.

All of which I agree with, except for one case: Slaughter Lane in southwest Austin. I’ve ridden on Slaughter in the past, as part of a club ride where we form a “bus” and are treated as such by the cars on the road. But Slaughter is a different animal for a solitary biker. It is a four-lane, divided road with no shoulders. The speed limit is 45 mph, but most drivers do at least 50. It just feels dangerous. 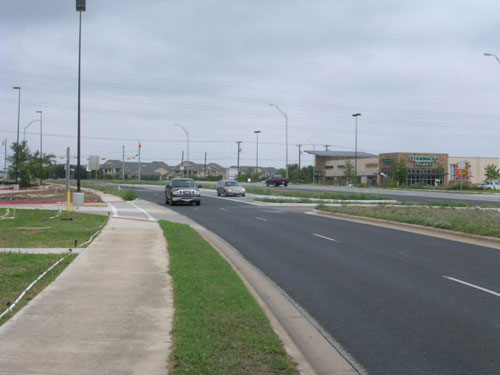 Slaughter Lane. Picture taken on a Sunday morning when traffic was relatively light.

So, the other day when I was on the last leg of our club ride to Kyle, I had a decision to make: Do I ride on Slaughter by myself, or do I take the sidewalk for the last mile and a half?

I thought back to the Road I course I took in April. The instructors told us that if we were uncomfortable doing something out on the road, don’t do it.

So I took the sidewalk. I make no apologies.