Sunday morning was a Sunday morning like any other Sunday morning. Well, the dog got me up a half hour earlier than usual to be let outdoors, but that wasn’t a problem. That just meant I could have breakfast a little earlier, which would leave me some extra time to tend to the bike before our club ride. The chain needed lubing, and I would have plenty of time to take care of that.

I ate my scrambled eggs with gusto while reading the news on my iPad, another Sunday morning routine. When I finished eating, I sat back in my easy chair with a cup of coffee, and … and … and………z-z-z-z-z. 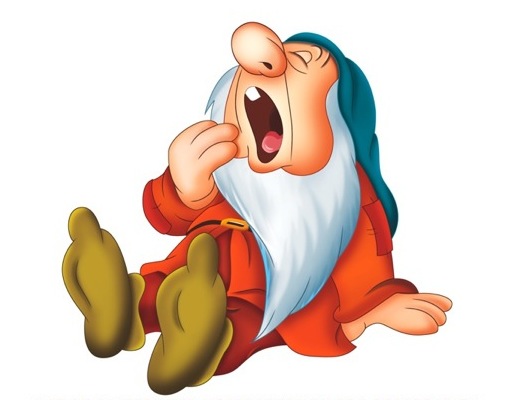 The dog barked to be let in. I jerked awake, momentarily disoriented. After letting the dog in, I sat back in my chair again, and this time, I caught myself nodding off.

If I was falling asleep so easily, I wondered how I would do on a 46-mile bike ride.

I tried to snap myself out of it. After all, we had a couple of B riders who had said they wanted to do the ride with me. I tried to concentrate on some of the more enlightening news sites.

My wife, who was up by this time, wondered what was going on. I told her I was skipping the club ride. I was just too tired.

That’s her long ride of the week. It’s 13 miles. I told her I figured I could handle it, but I wanted to take a short nap first.

When I woke up, she was next to the bed in her bike clothes.

“Too late,” she answered. “I’m just getting home after the ride.”

I looked at the alarm clock. Three hours had gone by since I went back to bed.

“You were out cold,” said my wife.

I’ve never been one to worry about getting eight hours of sleep a night. Six is more the norm for me. Lately, that’s been down to a little over five. It’s obviously caught up to me. I’ll have to cultivate a new bedtime routine. A sleep deprived biker is no biker at all.

Went to bed Friday night anticipating my usual Saturday morning ride. I’m something of a night owl. My regular bedtime is about midnight. This time, I hit the pillow at 11:30, and fell asleep quickly.

But four hours later, I was roused out of a deep sleep by a loud bark. The dog had awakened, and decided it would be a good idea to go outside. Since she sleeps in the kitchen, and we keep our bedroom door closed at night, she has no choice but to bark to get some action out of us.

I got up, let her out, and made my own visit to the bathroom. When she came back in, she went straight to her bed, as I did to mine.

She fell asleep instantly. I didn’t.

Another bark, this time around 5:30. I think she woke me up, but I’m not sure. If she did, I was not sleeping deeply. I decided I might as well stay up and make some breakfast.

I like to get out on the road before 8 a.m. Saturday. But I just couldn’t get moving this time. Lethargy had set in, and I couldn’t motivate myself to finish my coffee and get my biking clothes on. I eventually did, and rolled out of the driveway at about 8:45 a.m.

My Saturday morning route involves some hills — one longish, a couple short and steep — and a run out to the Mopac loop and the Veloway. It’s about 28 miles. Actually, I felt good. The pedals turned with a decent cadence, even in the higher gears. My average speed was a little above what it normally is. I was glad to finish in less than two hours, because recent rains have made my lawn burst into vitality, and my afternoon chore was cutting the grass.

I didn’t get out to cut it until about 3:30. I had fallen asleep, and napped hard.

Last night, I got strategic. After she finished her bowl of water around 8:30, I deliberately didn’t refill it, hoping that would keep her from having to make a potty run in the middle of the night.

No such luck. 3:50 a.m. — bark! But this time, I was able to fall asleep again, until she woke me just before six. Still, I headed out for the Sunday club ride with a sense that I wasn’t 100 percent. The B’s had an easy run — mostly flat, into the wind on the way out — about 40 miles round trip. I had trouble keeping up. The energy to spin the pedals to stick with the others on the ride just wasn’t there. Although we all finished together, thanks to some regrouping, and my average speed was once again slightly higher, I was — as my British friend Pippa says — knackered.

I got home in time to watch part of the Tour, and noticed her nibs in her favorite spot: my wife’s chair, snoozing soundly.

If I had this problem only on the weekends, I could deal with it. But to the dog, every day is the same, and must be lived according to the same routine. Sometimes, I get a late start for work because I’m dragging around after a too-early wakeup bark.

Now, I’ve never been one to get the prescribed seven to nine hours of sleep that adults are supposed to have. Six hours has always suited me just fine. It’s just that I’m not even getting six hours anymore, and that’s catching up to me.

Pat has come up with another plan to see if we can keep Emily sleeping all night long. We’ll try it tonight. If not, I think an afternoon nap will become a regular part of my daily routine — not just something I do when I’m tired from riding.