I’ve been lucky lately – no flats in the last two months, after a whole raft of them earlier this summer.  But a friend of mine has been plagued by the flat monster.  it seems every time we talk biking, he’s had another flat.

He thinks he might have his problem solved, however.  He bought some tire liners for his tires.  He thinks the extra layer will give him the protection he needs from the tiny shards of glass and bits of metal shavings that seem to cause most of his flats.

If that doesn’t work, he says he’s got his eye on some Slime inner tubes.  They come coated with a thin layer of Slime to prevent flats.

But if you install the Mr. Tuffies, “problem solved,” said another.

I told my friend tire liners might work, but wouldn’t he be better off just spending a little more on good tires?  Or even shopping around a little to get good tires, but at a good sale price? 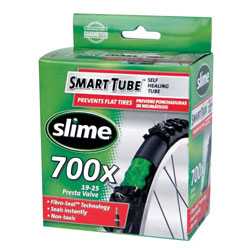 I have no experience with either tire liners or the Slime tubes.  My Gatorskins are holding up pretty well (They’ve taken a lot of abuse from being ridden on some crummy roads around here), so I’m not going to dash out and spend money on preventive measures when I don’t feel it’s necessary.

Have you had experience with either tire liners or the Slime tubes? Any recommendations about which way to go?