With the heat wave wracking much of our country now, my bike rides end with my bike clothes dripping. I’m a sweaty guy anyway, but lately it’s been ridonkulous. Not only is the sweat a problem, but the stink from the sweaty clothes permeates the rest of the stuff in our hamper.

Usually, my wife and I will pile our dirties on top of the washing machine after a ride. It’s not uncommon to do three different loads of just cycling gear during the week. At least that keeps them away from the rest of our stuff.

Still, they reek. I finally decided to find out what can be done to mitigate the odiferous offensiveness. The answer: Hydrogen Peroxide. 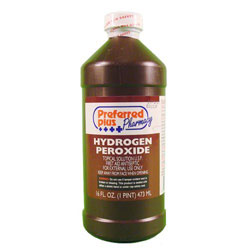 This common household product is credited with a variety of different uses, some that have credence, others that lack it. However, as a bleach and an antiseptic, it does have properties that would seem to make it a good odor fighter. We bought a couple of bottles

Long story short — it works. My wife adds a third of a cup of H2O2 to our bike clothes wash load. After the first two weeks of this, she made this observation:

It does work well. My two most-worn jerseys don’t carry that “permafunk” anymore. However, I noticed that my oldest jersey — a four-year old cheapie from Nashbar — still had a slight aroma when I put it on the other day for a short neighborhood ride. It could be the jersey’s age, or maybe the fiber content. Anyway, it still needs some corrective action.

One caution: hydrogen peroxide is a bleach. Most websites I’ve seen that talk about the benefits of HP suggest using it on whites in the wash to make them come out whiter, without resorting to chlorine-based bleach.

But with biking clothes, we haven’t had a problem. The jersey colors are still vibrant, with no trace of fading.

It looks like we’re in for a long, hot summer. I just bought another big bottle of hydrogen peroxide when I made our grocery store run today.