Okay, noobies. It’s time once again to chime in on an important noob topic. This time: Where and how do you organize your bike stuff?

When I was truly a noob biker, I attended a bike skills class where the instructor displayed her equipment. She kept it in what she called her “bike bag.” Actually, it was just a big ol’ duffel bag that she kept near her bike in her garage. In it, she kept her helmet, gloves, shoes, arm and leg warmers, vest, jacket, and a bunch of other stuff that I can’t remember now.

For her, it made sense because it was all in one place. Whenever she found the need to travel to get to a biking event, she put her bike on the rack, tossed the bag in the back seat, and knew she would have everything she needed once she got to the event.

Me, I’m not that organized. But I’m getting better. During previous garage cleanings, I’ve been able to clear out part of a countertop and reserve it for our helmets, shoes, and gloves. 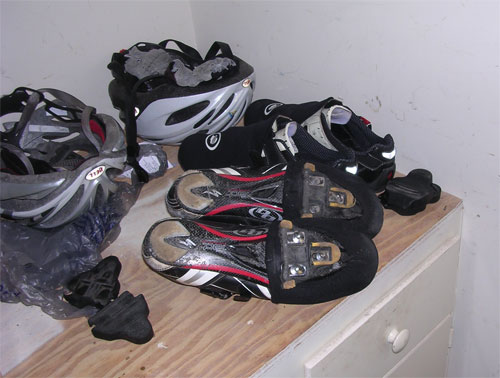 Both Mr. & Mrs. Noob store their helmets and shoes here.

Since I don’t play much golf anymore (cycling is the new golf, after all, right?), I moved most of the golf stuff out of a cabinet over the counter into a harder-to-get-to drawer. Now that cabinet is for bike stuff. 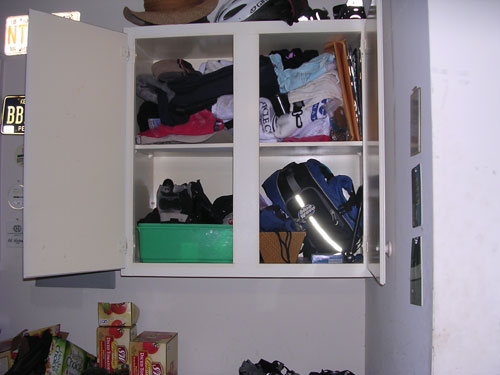 I keep older saddles, a spare seat bag or two, some ride goodies I have no room for elsewhere, spare lights, and a Camelbak in the cabinet.

Smaller stuff like  extra gloves, headbands, sundry small parts like screws and washers for cleats, CO2 cartridges, spare tubes, patch kits, et cetera and so forth and whatnot go into a plastic container that I snarfed out of our fridge (Mrs. Noob hasn’t missed it yet — or else she’s got so many other storage containers that she doesn’t need it, which is more likely). 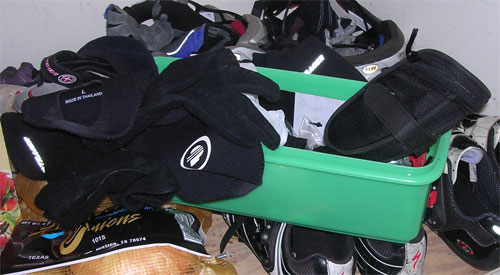 You can see that overflow items from our bi-weekly trips to Costco (bag of onions) are starting to invade my bike stuff space. I’m doing what I can to ward off the creeping incursion, but I may have to come up with a new bike stuff storage plan soon.

So, readers — how do YOU store your bike stuff? Send me a picture or two and a brief description (here’s the link), so I can use them in future posts right here on this very blog.