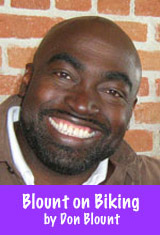 When the Bike Noob goes in for his annual physical exam each September, the doctor looks at his biker’s tan and asks if he uses sunblock. “SPF 30 or better,” he says. “Good. Be sure you do,” the doc answers. But today, guest poster Don Blount looks at sunblock from a different perspective.

Like many cyclists, my pre-ride preparation changes with the weather. In the fall and winter I check my warmers, long-fingered gloves and pack a rain jacket, just in case.

During the summer, instead of donning a wool cycling cap, one of the things I do before heading out on a ride is put on sunblock.

Skin cancer is the most common form of cancer in the United States. More than 3.5 million skin cancers in over two million people are diagnosed annually, according to the Skin Cancer Foundation. And about 90 percent of nonmelanoma skin cancers are associated with exposure to ultraviolet radiation (UVA and UVB) from the sun.

Sunblocks, such as zinc oxide and titanium dioxide, protect against the UV rays that cause sunburn and skin cancer.

A large reason for that unfavorable figure is because skin cancer is more difficult to detect in people with dark skin. And if it is found, it is often at a much more advanced stage.

I have known plenty of people who have had moles or some other type of lesions burned off because the doctors said they were the effects of sun damage.

It seems simple enough to not take a risk.

So I slather on the skin protectant before heading out for a ride. Whether the brand is Aveeno, Neutrogena, Banana Boat or some other type of sunblock — you should do so too.