Summer has hit Central Texas with a vengeance. It’s been hot, yes, but because of more rain than I’ve seen in several years, it’s been humid, too.

I was out on a club ride last weekend when suddenly my derailleur started acting up. I had trouble shifting from the big ring down to the small ring. I stopped to fiddle with it a bit, and got the problem straightened out.

But then during the past week, it cropped up again. I put the bike up on my stand and went after that derailleur. It took me two hours to do what a competent bike mechanic could do in 10-15 minutes, but the adjustments worked, and later that day I did a local 21-mile ride.

The next morning though, it was balky again. Not shifting from the big to the small ring. Again, some less than gentle ministrations and I was rolling, but this time, I decided to take it in to our club mechanic.

I explained to him about the derailleur adjustments I’d made, and how my ham-handedness probably screwed things up. He didn’t comment, but put the bike up on his stand and flicked at the front derailleur cable.

“Did you lube the pivot points?” he asked.

“Ahh, that’s about the only thing I didn’t do,” I replied.

Then the light went on. “Are they gummed up from my sweat?” I asked.

He moved the derailleur with his hand. “Looks like it,” he said. “Summer’s here, and up until about a week ago we didn’t have to worry about it too much. But now, we sweat on rides. And the front derailleur is a prime target for sweat.”

I did a face palm. We’d been through this before. But as he said, we’ve had nice conditions for our morning rides until just recently, and I hadn’t been sweating much.

He got the derailleur moving nicely between the big and small chainring. I paid him his usual pittance, and red-faced with embarrassment, loaded the bike into my car.

This morning, we did a hilly club ride and I was using all my gears constantly. The derailleur performed flawlessly.

I sweated like I was in a sauna. The first thing I did when I got home was wipe the bike down.

I’ve had this lesson before. Somehow, I just didn’t retain the information.

My wife and I headed out this morning to do another of those training rides for an upcoming charity event. Usually, I put the bike rack on the car the night before so I’m not rushed getting in on in the morning when we should be heading to the ride.

Last night I didn’t. My garage is just too hot with the sweltering weather we’ve had here lately, so I decided to get an earlier start and handle it this morning. (I did remember to freeze our water bottles last night, though.)

So in the relative coolness afforded by 78 degree (25C) weather, I attached the rack at 6 this morning. I methodically added items to the vehicle: bikes on the rack, helmets and shoes in the back of the car, gloves, cell phone, a few dollars in the plastic bag with the phone, a Clif Bar, bike computer, tire pump. There. I think that accounts for it all. Oh — let’s put on the sunblock now, hm? And don’t forget the sunglasses.

We left the house five minutes before my departure deadline (That was a first!) and got to the ride start 30 miles away in plenty of time. I did the reverse of what I’d done at home, pulling all the gear out of the car, pumping the tires, getting into the bike shoes.

“I didn’t bring a bandana.”

Sweat was already beading up on my arms. I always wear some kind of sweat band on my head. Without one, this would be an interesting ride.

Over the years, I’ve tried a variety of sweat bands. The first, and the one I still go to most often, is the lowly bandana. Although it becomes saturated with sweat in a short amount of time, I’ve found that if I wring it out at a rest stop, or maybe even a long stop light, it does a pretty good job of keeping my eyes free of moisture. 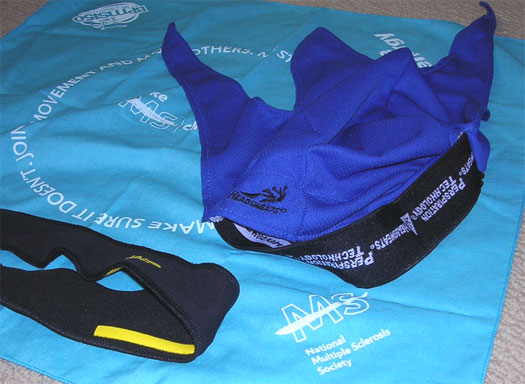 A bandana, a Head Sweats doo-rag, and a Halo head band with the rubber strip.

My next favorite is a commercial product, a Head Sweats doo-rag. It’s really my favorite, but because it covers the head and not just the forehead, I avoid it in hot weather. I want those big vents on my helmet to let the heat escape from my noggin.

I also have a couple of Halo head bands, which feature a rubber strip on the bottom. The rubber is supposed to steer the sweat away from the eyes, so that it drips off the temples. Problem is, these things get saturated even more quickly than a bandana, and after a month or two of use, they’re even less effective than a bandana.

Anyway, without one of these options, I would be reliant on the foam padding around the inside of the helmet. But on my helmet (a Bell Sweep) those pads are skinny. They’ll absorb sweat, but not a lot. And frankly, it had been awhile since I’d taken mine out and cleaned them. I adjusted the helmet as snugly as possible and headed out.

It was a simple 30-mile out-and-back. A tailwind pushed us north. I fell in with the ride leader and we quickly outpaced the rest of the 30-mile riders. We chatted most of the way to the turnaround. It wasn’t until we stopped there that I remembered my lack of a head band. I hadn’t noticed it. I took off the helmet and squeezed the pads to get out any schmutz, but there wasn’t much to be gotten.

On the southbound leg we ran smack into a headwind that slowed our progress. This route has long rolling hills, so it was slog up, fly down, and try to counter the effect of a wind that sometimes hit head on, and sometimes came at you sideways. Now I could feel the effect of no headband.

The sweat poured into my eyes. I found that if I turned my head, the wind would whisk the sweat away. I kept flicking my head to the left, and watching the water droplets fly off. It was a bit of a bother, but soon I forgot about it.

For some reason after several years of riding experience, the one item I find myself going back into the house for is a head band of some sort. I can never seem to remember that, even though I’m pretty good at other items.

As I put the bikes back on the car after the ride, my wife asked me about it.

“I’ve been after you about this for years,” she replied. “Your job when we get home is to make a ride checklist. It’ll stay in the kitchen and we’ll check it over before each ride.”

I wiped off my forehead and got into the car.

The oddest thing happened on my Sunday ride. I was about six or eight miles from the end, when suddenly, I couldn’t shift from the big ring down to the small ring.

This was problematical, because at the time, I was approaching the crest of a hill, and I needed the easier effort the small ring would give me to get over the top. I back pedaled — something I never do — and downshifted the rear cogset. That did the trick, and I was in the small ring again.

But the same thing happened throughout the rest of the ride, until for the last two miles, I kept the thing in the small chainring, even when I had an inviting downward grade.

The next afternoon, I took the bike over to our club mechanic’s house. (It’s nice to have a “club mechanic” — in this case, a member with over 20 year experience “making money off of fixing bikes” who at one time was wrench for a pro team.)

His next question startled me. 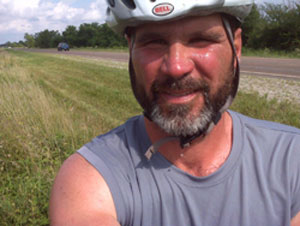 “Are you a heavy sweater?”

I did a double take.

He got the bike up on the stand and checked it over.

“I’m already seeing some corrosion on the brakes,” he said. “And here on the front derailleur, too.”

“That’s really strange,” I said. “It was shifting fine, and then suddenly, I couldn’t get it to shift down.”

“It was the straw that broke the camel’s back,” he retorted. “You thought it was shifting just fine, but it probably wasn’t. You’d just gotten used to it.”

There might be something to that. I’ve had some balky shifts in recent weeks. But I thought that was my lack of shifting technique, not my sweat. I watched him as he took out a bottle of lube and went to work.

“Front derailleur, front brakes, bottom bracket, rear brakes, in that order,” he lectured. “That’s what’s most affected by sweating. The rear derailleur rarely, if ever.”

He squirted some lube on the brake pivots.

“Pay attention to the pivots,” he said.

He shot some lube into the brake grip pivots, then pulled loose the brake and shifter cables and applied a light coat of grease to them. Then he cranked the pedals and started shifting through the gears — snick, snick, snick. Now it was time for the moment of truth — he changed hands to shift the front derailleur.

Click, click, it went. He shifted between the large and small rings several times. Each time, the shift was smoother than the previous.

“I think that’s got it,” he said, wiping his hands on a clean rag.

“So the trick is to keep everything clean,” I observed.

“I recommend that everyone at the very least wipe down their bikes at the end of the ride.”

I paid him for his trouble (he charges a pittance, compared to the LBS), loaded the bike into the car, and headed home.

This morning when I got home from my ride, I found a clean towel and went over the bike.