When I first started checking out Ray’s blog, it was because I was in search of tips. After years of riding a hybrid, I had made the move to a road bike, and found myself with a lot to learn. I’ve now been a “roadie” for several years, but I still remember a few of the lessons I learned along the way.

Ray gave a nod to this in a previous post, but it’s worth revisiting. For best results, it’s better to “feel” your way into Shimano-style road pedals than to look and aim.

Why? I’m not quite sure. But I know that early on in my experience with road pedals, especially when in traffic or on a group ride, I frequently fumbled with trying to click in properly. Alone it was often no problem, but when the pressure was on I often missed. Then I took a fellow rider’s suggestion to just feel my way in, rather than try to aim and click in, and found much better results.

Try this on your next ride. As you push off, hesitate for a moment to allow the pedal to swing into its natural, up-and-down orientation. Then without looking, swing your toe forward at a downward angle. It should naturally find the front of the pedal, allowing you to then simply push down and click into the locked position.

That’s a technical explanation, but it’s not a technical move. Rather, it’s one that works best when you don’t try, don’t look and aim, and just feel your way through it.

Next time you’ve got the sun above and behind, check out your shadow. I was watching mine the other day and it showed me some bad form — namely I was hunching my shoulders.

I’ve noticed a lot of people do it, especially noobs. Riding with our hands on the brake hoods, we often brace our arms to hold ourselves up, rather than relax the shoulders and bend at the elbows. It creates a lot of tension in the neck and upper back, as well as puts a lot of pressure on the hands. I had been dealing with numbness is my hands a lot as of late, as well as having some saddle issues. Forcing myself to relax and drop my shoulders felt weird, but I could tell by my shadow put me into a more proper riding position. For the first time in a long time, I had no numbness in my hands…and that was over the course of a nearly 50-mile ride.

Sure, you’ll likely feel it in a few other places. Your core muscles are engaged more in this position, and you can also feel it in your triceps. But if you really focus on the proper form, it will become second nature after several rides.

Jeff Hemmel diverts us from talk of stop lights and tickets with a sampling of tips for noob riders.

As noobs, we have a lot to learn. I originally found this blog when I was trying to find out how to align my cleats. Chances are, many of you have also stumbled across it because you were searching for useful information. On today’s ride I started thinking about whether I had anything worthwhile to share. Not the basic stuff you see on bike sites everywhere, but random little tidbits people often overlook. Here’s a few items that made the list…

Helmet Pads – I don’t know about you, but mine get soaked in sweat. That gets nasty after a while. The best suggestion I’ve heard as to how to wash them is simply take your helmet in the shower. Gently lather the pads up with shampoo, rinse thoroughly, and allow to dry. Simple. 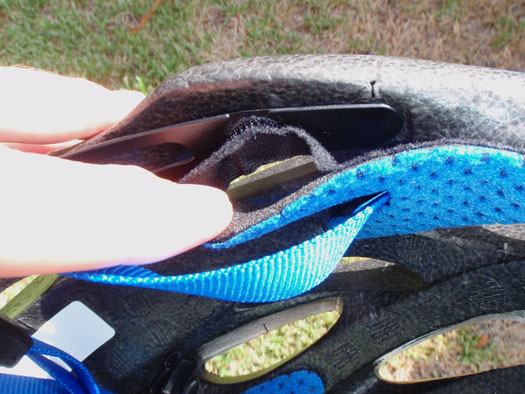 Inevitably, however, those pads will start to peel apart if you ride enough. I’ve found that by talking very nicely with the people at the helmet companies, they’ll send you a new pair free of charge. The rep that helped me most recently mentioned it’s supposed to be a one-time courtesy, but I’m pretty impressed that Bell has replaced the pads on my old Ukon twice, and just took care of my current Furio. That’s good business…just don’t tell them I sent you.

Silver Sharpie ­– Noobs are still dialing everything in, and as such should be encouraged to experiment with the position of handlebars, seat height, even the cleats on their shoes. Problem is, a lot of us are probably hesitant to try anything for fear we’ll never get things back where they were should we not like the result. 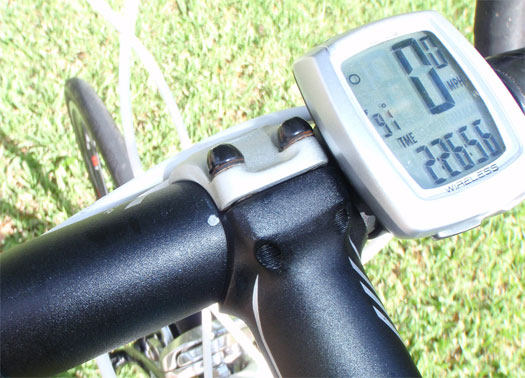 Enter the silver Sharpie marker. It shows up on things like black handlebars, seat posts, and shoe bottoms. As a result, you can mark anything you decide to change and, if it doesn’t work, find your way home again. My handlebars have a nice little dot that shows just where they should line up with the seam on my stem, my seat post shows my current preferred height, and my cleats are traced perfectly against the soles of my shoes, so when the current cleats wear out, the new ones can go in the exact same position. 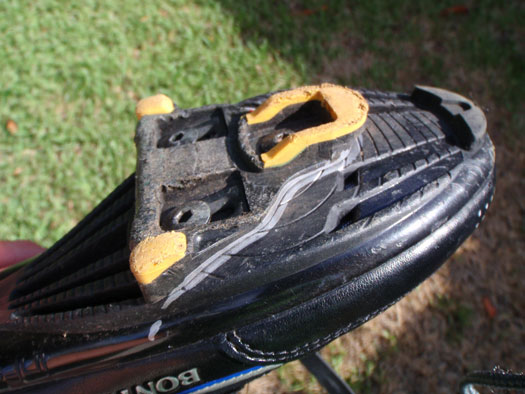 Cleat Markings – And speaking of cleats, most noobs probably know they should be roughly centered under the ball of your foot, at least as a starting point. But did you know that most cleat manufacturers mark that spot so you don’t have to estimate? Look closely and you’ll notice a small hash mark that designates the center for fore-and-aft adjustments. Thanks, uh, cleat-middle-marker-designer dudes.

Trim the Front Derailleur – Here’s a biggie. The chain on my road bike had the annoying tendency to rub against the front derailleur cage when I ventured into the highest gears. I mentioned this at the shop where I bought it; they originally told me it was just a simple cable adjustment. After the fix, friends mentioned it to me; they could still hear it chattering when drafting behind me. I even mentioned it at a different shop during a ride; they told me the crank wasn’t true, and that to fix the problem it would have to literally be pounded into submission with a mallet. Yikes. Thankfully the original shop owner finally revealed I just didn’t know how to “trim.”

Important noob point: I don’t ever recall that lesson when I bought the bike, and never saw anything about it in the owner’s manual, but many front derailleurs can be micro-adjusted on the fly to allow the chain to clear the inner and outer plates — those parallel metal bars that push it left to right — when the chain starts to rub. With my Shimano components, if the chain is on the big chainring and one of the smaller sprockets, a slight inward press of the larger (brake) lever on the left shift (listen or feel for a slight click) will push the front derailleur slightly outward, creating enough space to silence the noise. Conversely, when on the small charinring and largest sprockets (the “easiest” gears), a slight inward push of the small, inner lever will slide the derailleur to the inside to silence the chatter.

Amazing insider information that will make you ride faster than a speeding bullet and able to leap up tall hills in a single bound? Nah…just the random thoughts of a fellow noob.