Earlier this week, a favorite blog of mine, “Lovely Bicycle,” wrote about beater bikes. Velouria’s angle was to spotlight a new line of inexpensive bikes with the brand name, “Beater,” that are designed to fill the same role as a run-of-the-mill beater bike would fill.

But the mountain bike is, above all, a mountain bike, and today I actually rode it for its intended purpose — I took it out and rode some of the bike trails in South Austin. More about that experience in another post. My point today is, if I’m going to use the mountain bike for trail riding, it’s not really a beater, is it? It’s my mountain bike, and I still have to find something to serve as my go-to for everything else bike.

Well, maybe not. The great thing about the mountain bike is that it’s designed to be bashed around. I sure clunked the pedals and chain stays against enough rocks today. There’s no reason I can’t ride it to the store, or on rainy days if I don’t want to ride my road bike then.

All right, then — I do have a beater bike, even if it’s one in pretty good shape. And frankly, given my past record at using the bike as a utility vehicle, I probably won’t do most of those things.

How about you? Do you have bike that is a jack-of-all-trades, that can fill any role that your “main” bike — be it road or mountain — doesn’t fill? What kind is it? How do you use it? Is it a rolling wreck, or is it still a spiffy ride?

This is a guest post by David Veibl. David is a contributing writer for Cruiserbikes.com too, a source for the best cruiser bikes online.

Let’s begin this post with a little disclaimer.  No one – not even Sylvia Browne – knows exactly what the future holds.  While any psychic couldn’t give you next week’s lottery numbers, s/he could still give you a detailed pattern analysis that would tell you the numbers most likely to show up in next week’s drawing.  That’s what we humans do.  We predict.  We have all kinds of tools that help us see what the future holds.  There are even entire industries dedicated to predicting the future – the weather and climate industry, the stock market, and urban planning, to name a few.

Look at Portland.  In 1996, Portland’s urban planners predicted that bicycling would become more widespread in the following decades.  At that time, the Portland Bureau of Transportation reported an average of 3,257 daily bicyclists.  Since then, the number has jumped by 560% with an average of 18,257 daily bicyclists in 2011!  Portland’s predictions came true, and it looks like the number of bicyclists will only increase in the years to come.  If the numbers continue to rise consistently, Portland will see at least 102,240 cyclists on the road in 2030!  Luckily, the city is prepared for such a situation.  A couple years ago, they rolled out the Portland Bicycle Plan for 2030, a plan that accommodates the increasing number of cyclists with a new bikeway facility design, a stronger bicycle transportation system, larger bicycle parking areas, and so much more.  It’s expected to be complete by 2030.

More people are riding bikes now than ever

If there’s anything past statistics tell us, it’s that the number of cyclists will continue to climb dramatically year after year.  The increasing number of cyclists on the road could be due to soaring gas prices, concern for the environment, or the need to stay healthy and in shape.  Whatever the reason, bikes are becoming more and more popular.  In fact, the National Bicycle Dealers Association reported that 19.8 million bicycles were sold in the U.S. in 2010, while the Bureau of Transportation reported only 4.6 million cars sold that same year.  BMW sales are dwindling while Schwinn cruisers are selling like hotcakes! 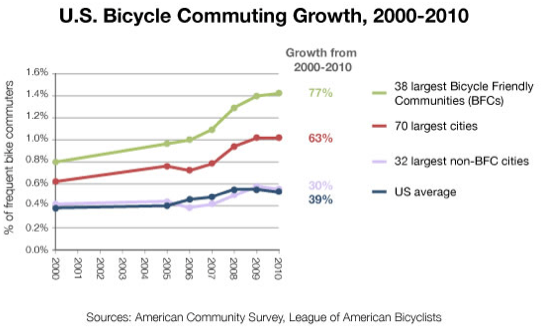 Major cities like New York, Chicago, and San Francisco, as well as countless small towns across the country, are installing more bike lanes, increasing funding for bicycle facilities, and encouraging their residents to travel by bicycle.  Now, since New York installed more than 200 miles of bike lanes in 2009, 1 out of every 24 vehicles on city streets is a bicycle.

Possible reasons behind the bicycle phenomenon

With the economy the way it is now, it’s hardly a surprise that more and more people have taken up bicycling.  The economy might not be the only reason, though.  If the economy miraculously improves in the next decade or two, it’s highly unlikely that people would ditch their bikes for cars.  By then, the habit of riding a bicycle for short trips would probably be so ingrained that people wouldn’t even hear of driving to the bank on a warm sunny day.  People would get so used to seeing cyclists everywhere that they wouldn’t think twice about buying a new bicycle and joining everyone else in the bike lane on their way to work.

Also, by 2030, communities everywhere will have expanded so much that it would be rare to have to travel to the next town to pick up a gallon of milk.  With everything available nearby, people living in urban, suburban, and some rural areas would hardly have to travel more than 5 miles to get something.  Almost every road would probably have a bike lane, so it would be far easier and safer to travel by bicycle.  People are far more environmentally conscious now than ever, and with scientists constantly finding new information about the environment every day, we’re paying closer attention to reducing our carbon footprint.

Do you think that, when 2030 rolls around, bicycles will be the main mode of transportation?  Why or why not?