Guest poster Don Blount continues the story of his recent crash — and its unexpected side effect.

I awoke early Saturday, I think it was about 4 a.m., feeling woozy. The bedroom was dark, except for the glow of a smoke detector indicator light on the ceiling. The only problem was that the light was not stationary. It seemed to be zipping clockwise around the room.

I was sweating and nauseous. I staggered a few feet to the bathroom, splashed water on my face and the dizziness went away. I made it back to bed.

Two hours later I was awakened by the same sensation. This time I stumbled to the bathroom and held on to the basin for dear life until the room stopped spinning.

I also hurled. I would do so another nine times that day.

I tried to eat some broth and some crackers but nothing stayed down.

I spent that portion of the day face down on the floor with a bucket next to me.

I remember hearing Bob Griese, Chris Spielman and another broadcaster announcing the Michigan State-Wisconsin game (Michigan State lost). I didn’t have the strength to change the channel. I heard carpet cleaners come and go, and I didn’t want to move for fear of another episode starting.

My wife was on the phone with an advice nurse. Initially it was thought I had some type of head injury from my fall days earlier. It can take up to two weeks for symptoms to develop from a head injury. But when told that every time I moved I got dizzy, the nurse surmised that I could have vertigo.

Vertigo isn’t just an inner ear problem that causes dizziness and imbalance. It can be brought on by a head injury – that was the concern with me. It can also happen for no specific cause in what is known as spontaneous vertigo.

My wife was able to get a 1:45 p.m. appointment at an after hours clinic with our health care provider. She dropped the kids off at friends and came back for me. As we drove to the office, I told her about various bill due dates and passwords she would need. At that point I thought I might have had some type of head injury and may end up unconscious or sedated. She was trying not to cry.

The doctor had me describe my symptoms and do certain balance tests, such as stand on one foot and touch my nose with my eyes closed. I wasn’t drunk, just sick. It wasn’t until I hurled in front of him like Mr. Creosote, the glutton who eats too much and blows up in Monty Python’s The Meaning of Life that he had his “Ah Ha” moment.

“I’m going to give you something for the nausea,” he said.

“Thank goodness,” I mumbled to myself.

I received that shot – in the butt, not the arm – at about 3:15 p.m. I was still dizzy but at least I wasn’t queasy. I was sent to the emergency room at another hospital for tests.

We sat in the emergency room for one hour and 40 minutes. A repeat of America’s Funniest Home Videos was airing. I just sat there with my head in my hands, asking my wife every few minutes how long we had been there.

They performed a cat scan and various blood tests but found nothing abnormal. 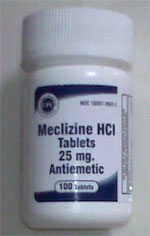 I was given meclizine, a drug used for motion sickness and dizziness.

I was battered but well enough to go home. We left sometime after 8 p.m.

I could function but was far from healed.

The symptoms went away in stages over the next few weeks. I couldn’t tilt my head back or move quickly and I had to sleep propped up too.

It kept me off the bike for nearly a week. I got back on the rollers first and after that went well, was able to convince my doctors to take off the cast and let me wear a soft support — my wrist was still fractured after all. A soft support I could ride with, a cast not easily. I took my bike out on the road the following day.

Don continues to monitor himself for any return of vertigo, which the doctors now say was completely spontaneous. But it can linger.

Our new guest poster, Don Blount, is getting over a nasty crash. Not only did he crack a helmet — and a wrist — but he had to deal with an unexpected side effect.

I nearly always thought of vertigo as an Alfred Hitchcock movie starring Jimmy Stewart and Kim Novak. At least that is until I came down with it. But when I awoke early Saturday Sept. 26 and the room was spinning, I had no idea that was what I was dealing with.

But let me back up a bit. Four days earlier, on the first day of fall, I had taken a tumble from my bike halfway through a 46-mile ride. 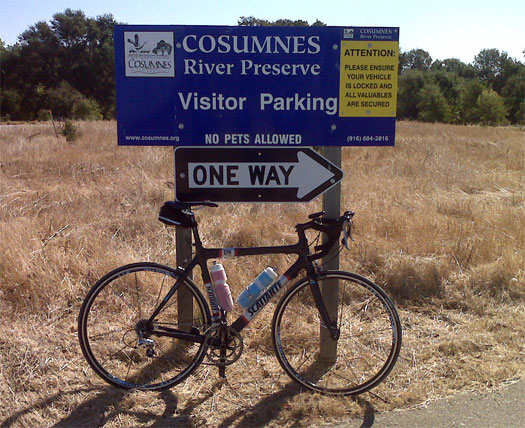 I had ridden to a nature preserve and stopped to take in the scenery and eat. My legs felt good. I stopped at the Visitors’ Center to look for a trash can to discard a banana peel. There were no receptacles but there were plastic bags to put your trash in and take it out with you. I put the peel in one and stuffed in a jersey pocket. I got back on my bike and started on my return trip home. As I looked up I saw a car approaching and thought it would be a good idea to get as far to my right as possible. The walking path was clear and I began to drift over.

What I didn’t see was that there was a gap between the nice asphalt road and the cement walking path. My front wheel caught in it, and I went down.

Best I remember, I fell on my head and left side, fracturing my left wrist and getting some road rash on my left shoulder, hip and knee.

As I have said previously, I wouldn’t ride without a helmet. My injuries would’ve been more severe had I not been wearing one. 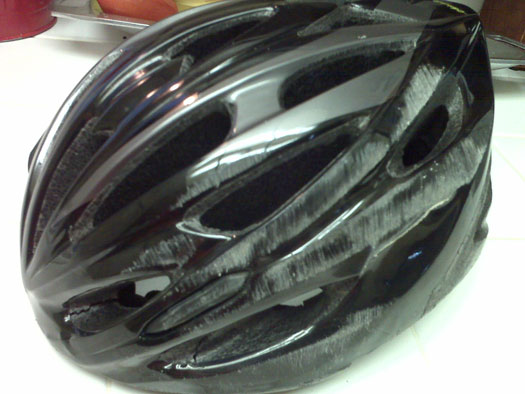 A couple of cracks are obvious in this shot.

The helmet did exactly what it was supposed to do. It absorbed the blow, cracking in about a half dozen places so my head would not. I still received a sizable bump on my head that would take a few weeks to fully heal.

My bike was fine aside from some torn bar tape and a scrape on a brake lever. I was able to gather myself and ride the 23 miles home, wrist and all.

I was less successful hiding the injuries from my wife.

“Uh, nothing,” I replied. She followed me as I limped through the house.

“What’s wrong?” she demanded this time.

“Well,” I said, “If you must do something, help me take my jersey off because I can’t lift my arm.”

I managed to get in the shower and muffle my moans as I cleaned my road rash. 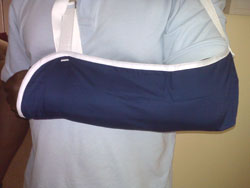 The next day my wrist was swollen and unusable and I went to see a doctor who put it in a soft support and my arm in a sling. I would miss work this day. 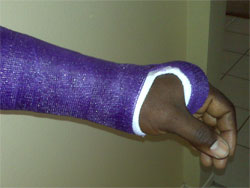 Two days later, Friday, I saw an orthopedist who put my wrist in a cast. I picked purple as a color because my daughters like that color.

I went to sleep that night thinking the worst was behind me and that I’d have to figure out how to make do with a cast for a few weeks.

I didn’t know how wrong I was.

What else could afflict Don? Join us again tomorrow as Bike Noob  brings another installment of “Blount on Biking.”